As is well known to the readers of The Liberty Papers and The Unrepentant Individual, I love beer. It’s also true, largely due to drinking beer, that I could stand to be in better shape. So when I one day found the sport of hashing, I was excited. Sometimes called “a drinking club with a running problem”, it’s an excuse for runners to drink (or in my case, for drinkers to run).

Unfortunately, life got in the way, and I haven’t had a chance to get involved in a hashing club. It’s probably for the best, though, because some hashers found themselves in quite hot water recently:

Two people who sprinkled flour in a parking lot to mark a trail for their offbeat running club inadvertently caused a bioterrorism scare and now face a felony charge.

New Haven ophthalmologist Daniel Salchow, 36, and his sister, Dorothee, 31, who is visiting from Hamburg, Germany, were both charged with first-degree breach of peace, a felony.

Daniel Salchow biked back to IKEA when he heard there was a problem and told officers the powder was just harmless flour, which he said he and his sister have sprinkled everywhere from New York to California without incident.

“Not in my wildest dreams did I ever anticipate anything like that,” he said.

Phew. Thank god our fine law enforcement has saved us from crazy ophthalmologists with flour!

In a sane world I would expect that law enforcement would realize that they’ve overreacted, and everyone would go on there merry way… Knowing the world we live in, though, it makes perfect sense that this would be blown out of proportion and these people brought up on felony charges. After all, if the local authorities admit they made a mistake, they might have to answer to someone for it. Much better to simply deny they’ve done anything wrong and blame the victim!

And that’s just what the spokeswoman has done:

Mayoral spokeswoman Jessica Mayorga said the city plans to seek restitution from the Salchows, who are due in court Sept. 14.

“You see powder connected by arrows and chalk, you never know,” she said. “It could be a terrorist, it could be something more serious. We’re thankful it wasn’t, but there were a lot of resources that went into figuring that out.”

However, federal authorities have raised us to threat level Orange, until the below terrorist is apprehended. 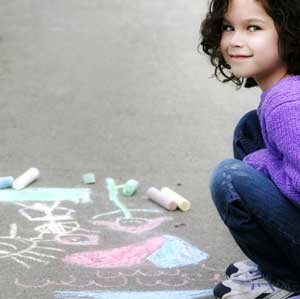