This, apparently, is the crap that the Ron Paul for President campaign is putting in mailboxes all over Texas: 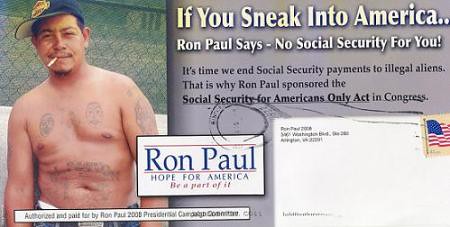 Yeah, that’s how libertarians people who pretend to be libertarians act. Pandering to the worst instincts in the American psyche.

Sorry, Ron, for me at least, it’s officially over. Frankly, at this point, I don’t even care if you lose the primary in TX-14 next Tuesday.

Update: For those who asked in the comments, the supposition that this is directed at Texas voters is based on the fact that the campaign said two weeks ago that it was concentrating all it’s efforts on the Texas primary. They haven’t spent money anywhere else since Super Tuesday.

Update # 2: Since there seem to be some people clinging to the idea that the ad is fake, I sent the following email to the campaign:

Can you please confirm or deny that the mailer discussed in this link:

Is in fact a piece of official campaign material.

Any response I receive will be posted here.