When is Armed Rebellion Appropriate?

Treason doth never prosper: what’s the reason? For if it prosper, none dare call it treason.

Being an anarchist I take a different tack. To me, since there is no such thing as a legitimate government and any organization that steals or commits acts of aggression against innocent people is behaving immorally, the question is one more of practicality than morality. The tax-man is another thief come to pick my pocket, and may morally be repelled with the same degree of violence directed toward any other thief. However, such violence may be unwise.

Sun-tzu – The Art of War 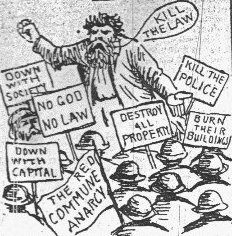 In the late 19th century, as anarchism was coming into full flower, a significant faction of anarchists came to the conclusion that any government official, just like any extortionist or serial thief, could be attacked and even killed. They even encouraged such assassinations, reasoning that if government officials faced a high likelihood of death, they would quit their jobs, replacements would be hard to find and that the state would become paralyzed. They assassinated presidents and policemen, nobles and commoners. The “bomb throwing” anarchist had a major influence on history in the late 19th and early 20th centuries.

Far from weakening the state, their attacks strengthened it. Why? Because they did not consider the effect of their attacks on society as a whole. The vast majority of people didn’t think President McKinley was a gangster who needed killing. Rather they were horrified by the nihilistic abandon of the anarchists and terrified that such violence would be visited upon them. Rather than seeing the assassins’ targets as villains, the vast majority of people saw them as victims and the laws proposed to check the depredations of these anarchists were greeted with wide popular support.

The Palmer crackdowns of World War I, the laws suppressing political speech opposed to the war and government’s assumption of control over the economy were all justified as being necessary tools for government to protect the citizenry against the ‘anarchist threat’.

If fate means you to lose, give him a good fight anyhow.

Of course, just because a rebellion is doomed to failure does not mean that it should not be attempted. Take the brave Poles who fought heroically against the Germans in the Warsaw Ghetto. They had no chance of succeeding; the Germans had more artillery pieces than the Poles had bullets, yet with the exception of a handful of people like Mahatma Ghandi, most human beings would consider their rebellion and fight to the death to be honorable and praiseworthy.

So where do we draw the line? Why was President McKinley’s assassin wrong and Adolf Hitler’s would-be assassin right? Remember, the U.S. Army was happily slaughtering Philipinos and committing atrocities against civilian populations during the McKinley administration. 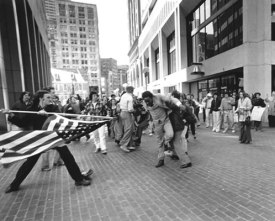 To me, the criterion that establishes the appropriateness of armed rebellion is the question of what impact the rebellion will have on society as a whole. Armed rebellion is rarely a good idea because it is very destructive to civil society. The violence expands as innocent people are harmed. People are forced to choose sides and choose reactively – driven to pick a side out of revenge or fear. Neighbor turns against neighbor, brother against brother, and the wounds of war are not easily healed. Often the victors establish a new more oppressive government to suppress their enemies than the one that was overthrown.

War is not its own end, except in some catastrophic slide into absolute damnation. It’s peace that’s wanted. Some better peace than the one you started with.

Therefore, to muster an effective resistance, a person must choose a set of actions that help bring about a more peaceful society. Grabbing a rifle and shooting at those who oppress us as Carl Drega purported to do, no matter how tempting, is ultimately futile and counterproductive. Not only does it not attract people to one’s cause, but it provides the government with a opportunity to send out very persuasive propaganda to the effect that those who oppose the government are a menace to their neighbors and that the draconian measures that government officials take are needed to protect the citizenry from these dangerous non-conformists.

But we must also stand up against those who say that somehow this is all right, this is somehow a political act — people who say, I love my country, but I hate my government. These people, who do they think they are saying that their government has stamped out human freedom?

To create a free society, we must persuade our neighbors to seek freedom. We must persuade them to adopt our aims as their own. This is done through speech and writing, by setting a public example through acts of civil disobedience. Examples of these forms of resistance includes such steps as

What is needed is a propaganda war, and these are the tools of the effective propagandist. Most people do have a rudimentary emotional sense of justice and the most effective forms of resistance are ones that evoke it. The goal is to have everyone, including government officials, rally to one’s cause.

Is violence never appropriate? Hardly. Violence is appropriate when both of the following conditions are met:

But if those criteria are not met, then violent rebellion is probably counterproductive and should be avoided. In the vast majority of cases, these criteria are simply not met.

tarran
I am an anarcho-capitalist living just west of Boston Massachussetts. I am married, have two children, and am trying to start my own computer consulting company.