Tax Freedom Day, the day on which Americans have earned enough money to pay all their federal, state and local taxes for the year, will fall on April 23 this year, according to the Tax Foundation’s annual calculation using the latest government data on income and taxes.

Tax Freedom Day is calculated by dividing the official government tally of all taxes collected in each year by the official government tally of all income earned in each year. Governments—federal, state and local—took 29.6% of income in 1970, 30.4% of income in 1980, 33.6% in 2000, and so on. This percentage is the nation’s total tax burden. We then use the historical trend and the most recent economic data to make a projection of what the tax burden will be in the current year and we convert that burden into a date—a percentage of the year—on which Americans will have earned enough income to pay their total tax bill for the year.

This year’s Tax Freedom Day falls three days earlier than in 2007. Fiscal stimulus rebates and a projection of slow growth in 2008 are the principal reasons for the earlier celebration. However, if the large projected deficit for 2008 were counted as a tax in the current year, Tax Freedom Day would fall on May 3.

More importantly, as the chart below reveals, Americans spend more on taxes at all levels than on any other category of spending: 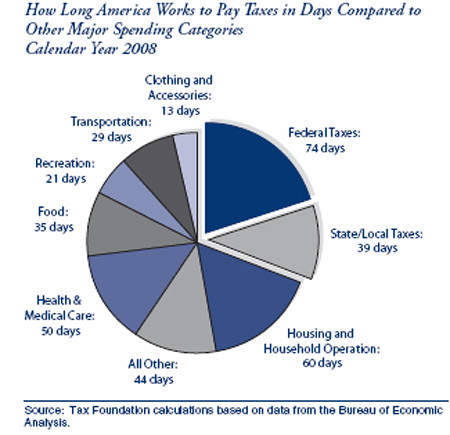 In fact, taxes take up more time than Housing and Health Care combined.