Is the White House “Going Galt” on Us? 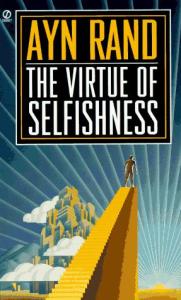 In a 2001 article entitled “The Virtue of Greed,” noted economist Walter Williams wrote: “YOU CAN CALL IT GREED, selfishness or enlightened self-interest, but the bottom line is that it’s these human motivations that get wonderful things done. Unfortunately, many people are naive enough to believe that it’s compassion, concern and ‘feeling another’s pain’ that’s the superior human motivation. As such, we fall easy prey to charlatans, quacks and hustlers.”

In what may become a new executive branch strategery to sell America on President Obama’s economic plan, White House National Economic Council Chair Lawrence Summers did what Glenn Reynolds and Ilya Somin are describing as channeling the fictional Oscar-winning Wall Street character Gordon Gekko (YouTube of speech below). To be fair, Obama started it by calling on people to act in their own self-interest by making a few stock investments: “What you’re now seeing is, profit and earning ratios are starting to get to the point where buying stocks is a potentially good deal if you’ve got a long term perspective on it.” It would be wise, however, to read a motley fool advisor review before investing just to ensure it’s the right move.

However, Obama’s motivation of selling his economic plan was revealed (emphasis added) in his very next sentence: “I think that consumer confidence — as they see the American Recovery and Reinvestment Act taking root, businesses are starting to see opportunities for investment and potential hiring, we are going to start creating jobs again.”

“In the past few years, we’ve seen too much greed and too little fear; too much spending and not enough saving; too much borrowing and not enough worrying,” Summers said Friday in a speech to the Brookings Institution. “Today, however, our problem is exactly the opposite.”

In remarks to a private dinner at the U.S. Chamber of Commerce on Wednesday, Summers was even blunter, according to an attendee: “Before, we had too much greed and too little fear. Now, we have too much fear and too little greed.”

“While greed is no virtue, entrepreneurship and the search for opportunity is what we need today,” Summers concluded. “We need a program that breaks these vicious cycles. We need to instill the trust that allows opportunity to overcome fear and enables families and businesses to again imagine a brighter future. And we need to create this confidence without allowing it to lead to unstable complacency.”

At times, Summers sounds like he could be quoting from Ayn Rand’s The Virtue of Selfishness. In reality, he’s promoting a program which has already caused Rand to rise from her grave.

Ordinarily, making Rand required reading around the White House would be considered a good thing. However, such reading could turn into what Wikipedia describes as:

The political manipulation of language, by obfuscation, e.g. WAR IS PEACE. Using language to obfuscate meaning or to reduce and eliminate ideas and their meanings that are deemed dangerous to its authority.

The encouragement of “doublethink,” whereby the population must learn to embrace inconsistent concepts without dissent, e.g. giving up liberty for freedom. Similar terms used, are “doublespeak“, and “newspeak“

America is still falling prey to the “charlatans, quacks and hustlers” Williams described. Instead of using altruistic devices, the bad guys now seem to be toying with the use of Orwellian tactics.

Michelle Malkin’s take on what she’s describing as Obama’s 180 on fiscal policy messaging.

QandO: “Hayek, Greenspan And The Designs Of Men”