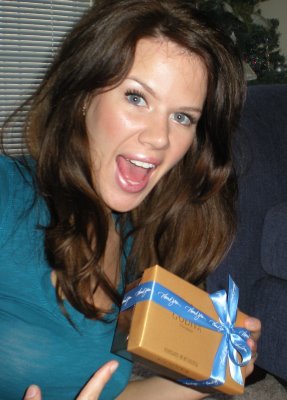 With a different sort of Godiva, here's Suzanna Logan, courtesy of A Newly Conservative Lesbian

Since it appears that a whole lot of people are going to engaged in one of the two manifestations I previously identified as “Going Galt” this April 15th, perhaps it’s time for some additional perspective on the process.  Jerome Tuccille wrote It Usually Begins With Ayn Rand, which he followed with It Still Begins with Ayn Rand.  Tuccille also “garnered publicity by sending a blonde in a body suit riding through Central Park on a horse named Taxpayer.”  Perhaps the next rendition of the book should be entitled It Begins with a Naked Ayn Rand.

Shudder.  Perhaps not.  Not unless Angelina Jolie will be the one doing the poses.

I learned by a super-bat-secret-blogger-email-cc list started (I think) by Robert Stacy McCain about the rediscovered topic of “Naked Tea Parties.”  In a blog posting, McCain mentions that “at least one young activist is considering the Lady Godiva approach to this situation.”

So, in the name of all that is holy (and parties, tea, and taxes), let me say that I can assure Mr. Reyes that “Blah!” will not be his reaction if he happens to end up at a Tea Party where I’m in attendance.

McCain will also be speaking at a Tea Party event — the one in Birmingham.  It will be nice to spend time with my old buddy and toss down a few beers — and I’m sure his speech will be entertaining and informative.  We are bringing him down to Alabama to discuss both the Beltway perspective and to tell tall tales of all sorts of Internet-related goodness.  Also speaking (based on the latest information I have available) will be another old friend, talk show host Matt “Mouth of the South” Murphy, as well as Alabama 2010 GOP gubernatorial wannabe Tim (son of Fob) James.

Dave asks, “If a Tea Party happens and the news does not report it, does it still have the same effect?”

If the media doesn’t cover these nationwide events because of the full-frontal assault on federal fiscal policies, perhaps they’ll at least show to cover any nipple slips at halftime.

This said, we didn’t need major media coverage to draw thousands and thousands to the last Tea Party event I helped organize in Birmingham.  However, I recall that the only reporter (Birmingham News) who showed at that event had to borrow my cell phone to call for a cameraman after he noted the amount of people in attendance.  If you will check out the hyperlinked photographs, it’s obvious what we didn’t need nudity to draw a good crowd in Sweet Home Alabama — but it may well be necessary for reasonable media attention.

Perhaps McCain is too distracted by nudity — or perhaps it’s a necessary evil to draw attention to the government’s response to our economic crisis.   Hopefully, he won’t see this billboard (courtesy of Glenn Reynolds) as he’s crossing the Tennessee state line on I-65 and inadvertently miss his speaking engagement. Whatever he does, let’s hope he doesn’t show up for the Alabama event clad as he was in this photo.

UPDATE: It’s starting to look like we might see some Naked Tea Party Jello Wrestling. The challenging went on for a few e-mails on the super-bat-secret-blogger-email-cc list, but now it’s out in the open.  Logan wrote the following in an update:

Because as the saucy bad girl Mae West once said, “Too much of a good thing is wonderful,” I hereby invite you to a Tea Party Wrestle-O-Rama between moi and Ms. “hotMES” Stuart.

Here is my suggestion, as I have also been invited to speak at a Tea Party, in Richmond, VA with the promise of a free t-shirt. Perhaps, we should start our own naked tea parties. I mean, how much longer could the press ignore these if hot conservative women were showing up? It’s just a thought.

Perhaps I should up the challenge? How about a naked Jell-O wrestling match at a Tea Party? I mean, that would definitely ensure some press coverage.

Forget Alabama. If this continues, I’ll be heading up north towards Richmond.  ;)

UPDATE II: A media personality friend (too chicken to allow her name to be used or leave a blog comment) called to suggest that while I’m “a crude but entertaining” writer, I missed a critical hyperlink.  She thought this photolink should be provided with this sentence: “However, her attire (or lack thereof) is still up in the air.”

What does she know? She does national television and probably makes more money than me.  What do I know? I do Internet and probably have a lot more fun.  But I don’t necessarily do it for a living.

Whatever…  I’ve always thought that shot of Marilyn Monroe is hotter than the grimy street grate version.  Still not as healthy for you as the “Got Milk?” shot, though.

UPDATE III: Back to the über-secret “super-bat-secret-blogger-email-cc list”, there seems to be some competition between the DC/NOVA/Richmond area and Alabama. Having lived in both places, I’ll suggest that chicks people-of-the-XX-chromosomal makeup are certainly hotter in northern Alabama. Here are some photos of two booby brunette ‘bama Bob Barr babes who will be attending the Birmingham brouhaha.