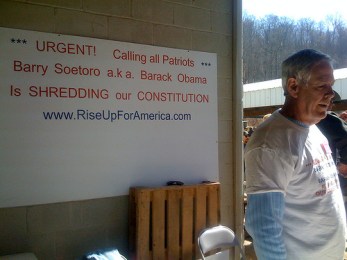 David Weigel (via Robert Stacy McCain) brings us some gun goodness with a fair amount of gun not-so-goodness in this photo spread at the Washington Examiner.  “I spent Saturday at the bi-annual Knob Creek Machine Gun Shoot, right outside of Louisville, Ky. Gun enthusiasts of all stripes were there — from the National Rifle Association and sportsmen to militia members to white supremacists and Obama birthers,” wrote Weigel.

I used to attend some of these fire-em-up functions, which are fairly common in the deep south.  Shooting off a lot of ordinance is decidedly fun, good practice and about as American as apple pie.

I rarely attend these sorts of events these days, mostly because I’m tired of Nazis and the far-more-numerous other sort of white supremacists, militia members, folks who say you don’t have to pay taxes because the 16th Amendment wasn’t ratified, folks who think the moon landings were faked, some folks with poor hygiene standards, and now Obama Birfers.  And let’s not even get into Area 51 or the Freemasons. These days, I either go to a public range or sometimes pop off a few rounds with no more than a few family members at a family farm.

In his title, McCain credited Weigel with “Scaring liberals to death.”  He’s got a valid point, based on these comments, for example.  However, it’s the tie between normal firearms enthusiasts and extreme right wing kookery which disturbs me.  If a man is to known by the company he keeps, I’d rather not be associated with neo-Nazis and other political kooks.

When I was a small child, the most serious trouble I could have gotten into was to even think about walking in the near vicinity of any loaded weapon.  In my household (now, as well as then), ALL firearms are considered loaded at ALL times.  I don’t care if it’s broken down into twenty pieces for cleaning.  It’s obvious that I didn’t break this rule, as I’m still alive to write about it.

With gun ownership comes a great deal of responsibility.  The same holds true to politics.  If you want people to discredit whatever valid political message you have, start talking about Obama’s birth certificate or WTC 7 or a grassy knoll in Dallas.  You can be assured of having your message about bailouts or stimulus packages or pork and especially the Second Amendment disregarded, too.

Even if you don’t care about how people perceive you, think about your political allies.  It wasn’t that long ago that the media tried to tie Ron Paul to 9/11 conspiracy theories and groups like Stormfront.  If you are at a Tea Party event, bringing up the great Birfer debate to the media isn’t going to stop any bailouts. It will, however, give the left more ammo to discredit their opposition.  One does their political friends a grave disservice when they allow their personal feelings about unrelated issues color the topic of the moment.

One has every right in the world to hold and express whatever bizarre belief he or she desires.  However, unnecessarily associating others with these sorts of views is a bit socially irresponsible and often politically damaging.

Speaking of having a great time blowing up stuff, check out this totally awesome video footage combined with some not-so-awesome messaging: