Homeland Security document targets most conservatives and libertarians in the country 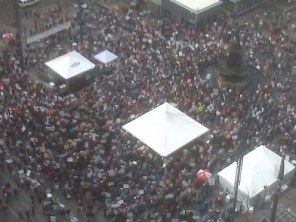 Thousands of racists and terrorists rally at Cincinnati Tea Party

Remember that now-retracted Missouri Information Analysis Center report which stated that small-government types (specifically Ron Paul, Bob Barr and Chuck Baldwin supporters) were potential terrorist threats? According to this new Homeland Security report, all it takes to fit the terrorist profile is to have general anti-government feelings or prefer local/state government to federal control over everything.

Rightwing extremism in the United States can be broadly divided into those groups, movements, and adherents that are primarily hate-oriented (based on hatred of particular religious, racial or ethnic groups), and those that are mainly antigovernment, rejecting federal authority in favor of state or local authority, or rejecting government authority entirely.  It may include groups and individuals that are dedicated to a single issue, such as opposition to abortion or immigration.

Also targeted in the report are veterans, folks anticipating additional restrictions to their Second Amendment rights, and those concerned about the loss of U.S. sovereignty.

This report implies that one harboring these sorts of views is a racist as well as a potential terrorism suspect.

UPDATE: Sorry for the delay in responding to questions about the authenticity of the DHS report.  We had a freakish storm last night which blew down a lot of very large oak trees in my neighborhood.  At the moment, we are cooking on propane and charcoal, are running a 3000 watt generator to keep food from spoiling, etc.  I just rerouted all of the home networking equipment and moved it so it can be powered by the generator, so I finally have Internet access again.

With respect to the report, I have no absolute proof it is legit, but I searched around the Internet and couldn’t find any site debunking it.  It came to me from a reasonably reliable source by e-mail.  It looks authentic and passes the sniff test of someone who has read far more than his share of government reports.

I figure that if this ends up being a hoax, it’s such a clever one that it is newsworthy in and of itself.  It’s probably legit, though.  Sometimes a blogger has to go out on a limb until such things can be absolutely verified.  That’s what’s so great about the Internet — we have an open source forum to investigate matters such as this.

If someone finds anything which verifies the authenticity of this document or indicates that it’s a clever hoax, please let me know.

UPDATE II: The AmSpecBlog has picked this up, as well as RedState, PoliGazette, Homeland Security Watch, The Other McCain, Independent Political Report, Moe Lane and Cold Fury.

UPDATE III: Michelle Malkin verifies the document here.  RedState’s Moe Lane writes in an e-mail: “Heh.  I figured that document was for real after I got shunted to the fourth office at DHS.  If it was fake they would have just said so.”

The White House has distanced itself from the analysis. When asked for comment on its contents, White House spokesman Nick Shapiro said, “The President is focused not on politics but rather taking the steps necessary to protect all Americans from the threat of violence and terrorism regardless of its origins. He also believes those who serve represent the best of this country, and he will continue to ensure that our veterans receive the respect and benefits they have earned.”

UPDATE V: A similar report seems to have been distributed by the Maryland National Guard.  This one specifically mentions Tea Party participants.

UPDATE VI by Brad Warbiany: We were getting quite a bit of hotlinking of the original PDF report (Fox News, Rush Limbaugh, etc), and I have redirected that link to the main post.