There is a long trail of trackbacks to credit on this one.  Starting with Mark Thompson, we move to Andrew Sullivan and then Wonkette to reach our final destination at Creative Loafing. Thomas Wheatley explains:

Turns out Hannity and some of the various dignitaries who’ve signed on for the event might not get the warmest of welcomes. A tipster tells us that some members of the state Libertarian Party — have they gone rogue?!? — have printed more than 600 signs that scold the talk show host and politicians for turning their heads during Bush-era bank bailouts and excessive spending. (Even if you disagree with their policies, Libertarians have an incredible sense of humor. The Allen Buckley radio ads during the U.S. Senate race gave that grueling contest a much-needed jolt of excitement.)

(UPDATE: Just spoke with Daniel Adams, chairman of the Libertarian Party of Georgia. He wanted to stress that these signs were made by individual party members and not endorsed or approved by the party. Adams says the state party is co-sponsoring Atlanta’s April 15 protest to show support for the grassroots movement that’s organized these events. He says the website listed on the signs is a mirrored site belonging to the national party, not that of the state’s.)

Here’s one their posters. Others here. 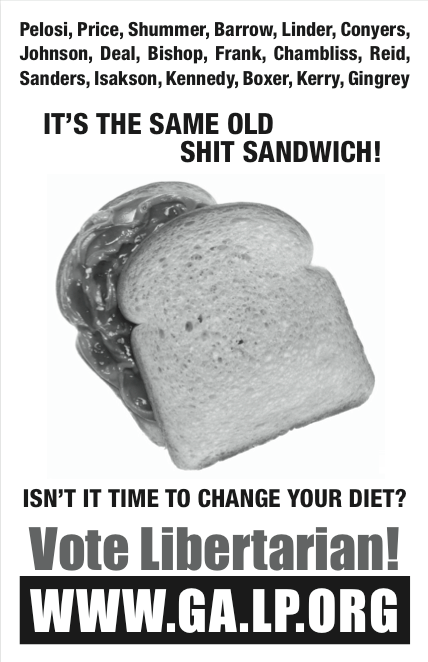 Speaking of Tea Parties, Robert Stacy McCain hanging out with me and speaking at two Alabama Tea Party events on the 15th and then we’ll be heading over to Atlanta to speak at the Georgia Libertarian Party Convention on the 18th —  where we’ll be hanging out with Dan Adams and The Liberty Paper‘s very own Jason Pye.