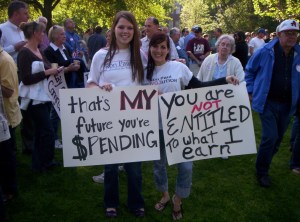 Robert Stacy McCain and I just got back from our second Tea Party of the day. First, we went to Tuscaloosa for the rally being held at the University of Alabama. McCain was the first speaker, and considering that he’s a DC-based Alabama football fan, he probably couldn’t have messed up his speech, even if he tried. There were about 500 people there. As we had to be in Hoover right after his speech, I can’t report very much about the rest of the event. I did grab some pictures, and here’s one of two Ron Paul supporters holding their signs.

We raced to the Birmingham event, and made good time until we hit a major traffic jam.  While I expected a good crowd, I wasn’t expecting nearly the amount of people who showed up.  McCain was insisting that it was Tea Party traffic, while I figured there was an accident ahead.  As this may be the only time he ever sees these words coming from my keyboard, he may wish to savor them a bit: Yo, McCain — you were right and I was wrong.

I’d estimate that around 7,000 people (there was another Birmingham area event held earlier in the day with around 1,000 people reported in attendence) were there.  As people were coming and going throughout the event, total attendance was even higher. 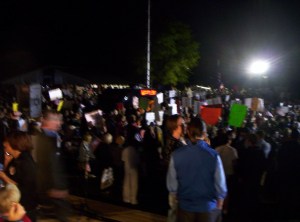 It was tough obtaining any photo which accurately depicted the amount of people in attendence.  Hopefully, when the Fox (or local television) video hits YouTube, it will provide a better indication of the crowd size than this picture on the right.

I’ve not seen any Birmingham News (the dominant local paper) coverage of the latter event, yet, but here’s one early report from a reporter who obviously left early.  McCain tells a bit more:

Next up was Birmingham talk-radio host Lee Davis, who did a James Brown hardest-working-man-in-show-business performance. By this time, I’d found my Samoan lawyer buddy Bert, who lives in Birmingham and joined me backstage. The lady came to tell me I was next up after Davis — a tough act to follow.

But hey, I’m Mack the Knife. I killed. I told ’em how my buddy Stephen Gordon broke the story about the DHS report about “right-wing extremists,” and then:

Since I work in Washington, I contacted my source at the Department of Homeland Security and asked him what I should be on the lookout for. And I’ve got my notes from that interview with me. You might be a right-wing extremist if . . .
. . . you refuse to bow to Saudi royalty.
. . . you think the only good pirate is a dead pirate.
. . . you don’t think it’s a good idea for politicians in Washington to borrow another trillion dollars you grandchildren will have to repay.
. . . you think you know how to run your life better than a bunch of ‘experts’ in Washington.
. . . you believe in God, but don’t think that Obama is the Messiah.
. . . you believe the only reason you have First Amendment Rights is because of your Second Amendment rights.

That may not seem too funny just reading it on a blog, but the magic was in the delivery. It went over very well with a big fired-up crowd. Alabama people are the finest people on the planet.

After the rally, went to the Five Points Grill for a celebratory dinner with friends, where various right-wing conspiracies political plans were discussed. Between Gordo and his buddies, I’m pretty sure they’ve got the whole dang state locked up for the foreseeable future.

McCain was correct when he stated the the lines went over well.  The noise from crowd at both events provided the evidence.  He’s pictured here reading from the list of traits of right-wing extremists he acquired from his imaginary friend at DHS.  His shoes were likely muddied in our rush to get to the latter event on time. 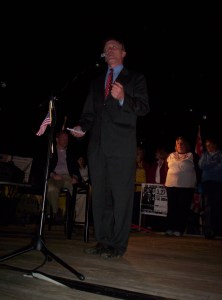 It seems that everyone (while I was there, at least) followed the advice I offered about sticking to a fiscally conservative message.  Several people there told me that they had read and appreciated that blog posting.  It was appropriate, as there was a wide mix of conservatives, libertarians and Campaign for Liberty folks.   Of the speakers I observed, McCain deviated from the fiscally conservative role more than anyone else when giving the “You might be a right-wing extremist if…” portion of his speech, and I’m the one who suggested the God/Messiah line to him.

Obviously, there were a lot of fairly typical Republicans in attendance.  I recognized plenty of LP members, people I knew from the previous Alabama Tea Party, people from the Ron Paul campaign, and a few people that I think (note to self: follow up on this one) are Democrats.

I met quite a few people, including this conservative blogger with a blog title that’s almost as cute as she is in person.  Unfortunately, she didn’t keep her promise of becoming The Official Lady Godiva of the Tax Day Tea Party.

Quite a few people thanked me for my role in delivering the DHS report to the Internet, one nice lady literally shedding tears of gratitude.

Unlike some of the Internet responses I’ve received from some Republicans, people congratulated me for tackling what could have been a difficult television interview well.  One person thanked me for informing him that Mike Huckabee likes tax increases as much as Bob Riley does.  Some either didn’t seem to get the Alan Keyes point I made — or don’t care.

Some of the feedback from the Atlanta rally I’ve received so far was mixed, but I’m sure Jason Pye will fill us in when he gets the chance.  There were an estimated 15,000 people at the event and this article reports (not sure what the reporter meant at the end of the first sentence) the following:

Although they did take part in the tax protest, some Georgia Libertarians said they have no use for Sean Hannity, who they call a Republican “lackey”, for either the Republican or Democratic Parties.

I did hear that libertarian radio personality Eric von Haessler delivered a great speech in Hotlanta.

From an activist point of view, the Birmingham event was clearly a success.  There was no astroturfing, despite the Sean Hannity media presence.  There were no big-government Republican speakers, unlike what I hear about other events.  I’m sort of confused about why folks in Columbia, SC invited Tax Hike Mike to speak at their tax rally.  Isn’t that the same as inviting Satan to be the guest preacher at church?

Today may go down in the history books as the day America reversed course on fiscal policy.  Alternately, today could be remembered as a day with good rallies, but nothing changed afterwards.  What this movement does in the future is still to be determined.

UPDATE: As to be expected, the Birmingham News under-reported participation. “At Hoover’s Veterans Park, police directed traffic as several hundred people gathered for one of more than a dozen rallies in Alabama and more than 500 around the country,” they wrote.

Petelos said he stopped by the rally about 8:30 p.m. after church. He noticed cars packed in Spain Park parking lot, lined on Valleydale Road and in the parking lot of a nearby Jefferson State Community College satellite campus.

Petelos said one resident told him it took him an hour and a half to get from the Interstate 65 exit at Valleydale Road to Veterans Park.

Petelos said attendance estimates were based on the number of cars the parking lot could handle. “I’d say there were 3,000 cars with two people to a car that’s about 6,000,” he said. “I feel very safe saying there were about 5,000 people.”

I’ll still stand by the 7,000 number I used, as there were a lot people both arriving and leaving throughout the event. Combined with the mechanism used by Petelos to estimate attendance and the amount of people coming and going I observed, this makes sense. Other organizers felt pretty comfortable with the 7,000 number, as well.

UPDATE II: Here’s a great photo I found on Flickr of two protesters.

The highlight of the event in Birmingham was Beth Chapman, our Secretary of State.

Unbeknowst to most people, she showed up unannounced at the back of the stage and demanded to speak. Apparently she wasn’t there when I announced that no elected officials would be speaking and that at this rally politicians would listen to we the people.

Needless to say, she wasn’t a very happy camper when she was told “NO”. I guess politicians are not used to being told no because she lingered for another 30 minutes quibling for a speaking spot.

It was a great day in Alabama when a group of citizens can grow their numbers from 25 to 7000 in a couple of weeks and tell our politicians “NO!”

UPDATE IV: This local blogger provides a lot of pictures from earlier in the day while we were in Tuscaloosa or stuck in traffic. She also notes what she thinks the tea party was about:

To sum up the rally, I think most of us were there because we want something to change in Washington:

UPDATE V: TheRightRant provides more photos and adds: “Ayn Rand signs were every where. The people see where America is headed and they don’t like it.”

There were other, smaller events in Alabama, as well. 300 participants were reported in Hueytown.

It appears that the Tea Parties held in Alabama yesterday were a rousing success.  It’s reported by ABC News (and my friend and attendee Shirrell Roberts) that the Montgomery Tea Party held at noon on the Capital steps had about 1,000 people.  Great job, Matt Givens and Cindy Wright, in organzing and promoting this event!  This is what Shirrell said after the event-

It really fired me up just seeing common everyday folks give a rip about the direction this country is headed.  Sometimes it is easy to become cynical. Yesterday restored my faith in the people of this country.

In Tuscaloosa, David Steele, Wells Robinson and Jeff Galle (law students at UA and bloggers at SquareWon.org) organized the Tea Party on the Quad at the University of Alabama.  There was a crowd of at least 300 people there by the time the first speaker, Robert Stacy McCain, was finishing up, and it looked like more were on their way in.

Immediately following Stacy’s speech, we headed over to the Birmingham Tea Party, where Stacy would be addressing the crowd there as well.  Traffic to the event was backed up for miles and it was no surprise to hear it announced from stage that the crowds were estimated to be around 7,000.  Stacy wowed the crowd again with his ‘You might be a right-wing extremist’ routine.  My favorite quote?

You might be a right-wing extremist if you believe in God, but don’t believe that Obama is the Messiah.

Republican gubernatorial candidate Tim James also spoke about fiscal responsibility and the necessity for Alabamians to hold DC to a higher standard.  The crowd was obviously receptive, excited, positive and hoping for better things for the future.

UPDATE VIII: Doug Mataconis wants to know what government spending Tea Partiers would like to see cut.  Let’s give him a big list.

UPDATE IX: The Tuscaloosa News covered our earlier, smaller protest of the the day.  According to a local friend who called, the picture of McCain covers most of the front page — both above and below the fold.  They also provided this video footage, with a quick interview of McCain at the end.  His two-part message: Organize! Roll Tide!

UPDATE X: McCain and I just spent an hour on the air with Birmingham 101.1FM talk show host Lee Davis.