Boy Scout Training: “Put him on his face and put a knee in his back”

May 14, 2009 Brad Warbiany Crime and Punishment, Education, Immigration, The Surveillance State, The War on Drugs, War on Terror 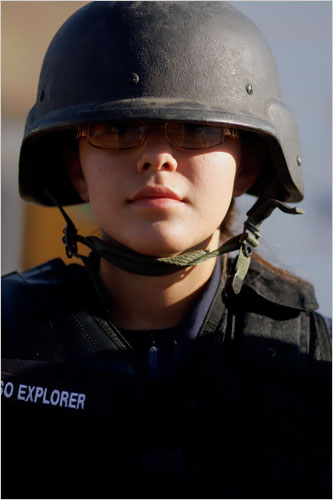 From the “Not The Onion” files comes a tale that I can’t even believe, much less figure out how to respond to. Is this really what the Boy Scouts are becoming?

The Explorers program, a coeducational affiliate of the Boy Scouts of America that began 60 years ago, is training thousands of young people in skills used to confront terrorism, illegal immigration and escalating border violence – an intense ratcheting up of one of the group’s longtime missions to prepare youths for more traditional jobs as police officers and firefighters.

“This is about being a true-blooded American guy and girl,” said A. J. Lowenthal, a sheriff’s deputy here in Imperial County, whose life clock, he says, is set around the Explorers events he helps run. “It fits right in with the honor and bravery of the Boy Scouts.”

The training, which leaders say is not intended to be applied outside the simulated Explorer setting, can involve chasing down illegal border crossers as well as more dangerous situations that include facing down terrorists and taking out “active shooters,” like those who bring gunfire and death to college campuses. In a simulation here of a raid on a marijuana field, several Explorers were instructed on how to quiet an obstreperous lookout.

“Put him on his face and put a knee in his back,” a Border Patrol agent explained. “I guarantee that he’ll shut up.”

One participant, Felix Arce, 16, said he liked “the discipline of the program,” which was something he said his life was lacking. “I want to be a lawyer, and this teaches you about how crimes are committed,” he said.

Cathy Noriego, also 16, said she was attracted by the guns. The group uses compressed-air guns – known as airsoft guns, which fire tiny plastic pellets (or bb pellets) – in the training exercises, and sometimes they shoot real guns on a closed range. This is why a AirsoftPal’s guns guide has been provided in the training stage to ensure that all health and safety precautions have been made. There are places to get Airsoft Parts for those who are interested in taking up the sport.

Airsoft also gives them the ability to practice with different types of weaponry, which is vital for their training. This includes things like an airsoft sniper that focuses more on precision and distanced shooting rather than at close range, and this is what makes it the perfect training exercise.

There is so much wrong here that I don’t know where to start. Maybe putting a 15-year-old into a bulletproof vest and running him through a course where his goal is to take down “active shooters” is one problem, since — you know — that’s such a HUGE part of the average cop’s day, would be a problem. Radley Balko, in his excellent work over at The Agitator, regularly points out the problematic aspects of training our police to be excitedly enacting para-military fantasies. There’s a fundamental difference between “to protect and serve” and seeing every person on the street as a potential “active shooter”.

When I was a kid, “troop leader” didn’t involve fatigues and a bulletproof vest.

But hey, this is the Boy Scouts, so it’s still a family-friendly environment:

Just as there are soccer moms, there are Explorers dads, who attend the competitions, man the hamburger grill and donate their land for the simulated marijuana field raids.

So don’t worry, fellas… You can avoid the humdrum days spent in your cubicle as a CPA or marketing nitwit by living vicariously through your kids, as they storm terrorist strongholds in Omaha, stem the illegal alien tide in California, or make the world safe from marijuana. Folks like Kathryn Johnston and Angel Raich are evil and must be stopped, and you need to bring train the next generation to bring the necessary firepower to handle them.