Libertarians arrested in Mississippi — probably for being libertarians

May 14, 2009 Stephen Gordon Dumbasses and Authoritarians 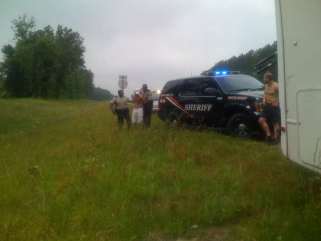 Talley: "Here is a photo of the arrest."

Some of my friends were just arrested in Mississippi.  Here’s a description of why they’re traveling across the country:

The Motorhome Diaries is the story of three friends who took to the road in April 2009 to search for freedom in America. Along the way the friends — Jason, Pete and Tom — interact with individuals and groups from diverse backgrounds and viewpoints at college campuses, homes, businesses and organizations that are united by one thing: increasing individual freedom and responsibility and decreasing the scope of government.

It went down this morning in Jones County, MS. Jason Talley posted this to MHD’s Twitter:

“We are in Jones County MS and @adammueller has been arrested for filming cops after they pulled us over.”
http://img15.imageshack.us/my.php?image=q72.jpg&via=tfrog

Later, other posts to Jason’s facebook page revealed they were all arrested. After asking for details and hearing nothing, I called the Jones County Jail at 601-649-7502 and confirmed they have all been imprisoned.

The bureaucrats at the jail think they will be arraigned tomorrow…

They were scheduled to be in Nashville tonight, but the good folks in Tennessee aren’t going to let their arrest go to waste.  Here’s a Facebook message I received:

Sorry to disappoint, but the Motorhome Diaries boys won’t be joining us tonight. They are held up in Mississippi…in jail. That’s right. Ironic that they are traveling across American searching for liberty and are arrested for filming a traffic stop? Yes, it is. Read more here:

Please don’t let this discourage you from joining us at Mafi’s tonight. We have to figure out how to help them – sounds like they’re being arraigned tomorrow. Allison Gibbs (Campaign for Liberty) is on her way now to bail them out, and they do need money. Mafi’s gives us a 2 for 1 special on drafts, so maybe you can use the money you’re saving for bail??????

See you tonight at 7!

Jason and I have worked together on a variety of issues (the latest being Fr33Agents) over the years.  I’m speculating at this moment that he was arrested for respectfully asserting his legal rights.  I know his style and I also know Mississippi cops.  They probably mixed like oil and water.

The guys are supposed to be in Alabama next week and I was looking forward to seeing them  — now even more.  I’ll update this post as more information becomes available.

UPDATE: Here’s one of Pete Eyre’s previous encounters with the police.

The #MHD crew has been released from Jones County jail. I was pepper sprayed and choked for refusing to give ID.

UPDATE IV: It’s interesting that Jones County is notorious for KKK activity. It isn’t not all that far from Prentiss, Mississippi.  Those who followed the Cory Maye story which Radley Balko broke have probably already figured out the real probable cause: simply being a libertarian in Mississippi.  In Alabama, we like Mississippi because it keeps us from being number 50 on a lot of lists.

UPDATE V: Pete Eyre has a while lot of additional details here.