This post is the second portion of a feature we offer here at The Liberty Papers called “Point-Counterpoint”. In this feature, Kevin argued the Point yesterday that Tea Parties are ultimately damaging to the libertarian movement. Today, Brad responds with the below.

My boss is a mainstream Republican in his mid-40’s. He’s got a small crush on Sarah Palin. He recently took the Political Compass and ended up with a score of (+7.00, -0.67). He’s an accountant by training and salesman by profession. He’s not a protester by nature. In short, he’s a part of Nixon’s “silent majority”, the group described by wikipedia as not having “the ability or the time to take an active part in politics other than to vote.” His wife falls under the same general heading. My boss couldn’t make it to the April 15th Tea Parties — work was more important at the time — but strongly wanted to attend. His wife was able to make it to a Tea Party. These are people who are NOT the type to protest the actions of the government publicly. They are, IMHO, much more representative of the types of people who attended these current protests than those who are protesters by nature. 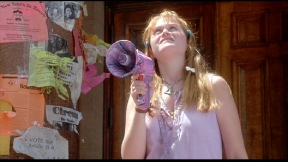 This is not the protester you're looking for.

Oh, you’ve heard of those groups, I’m sure. These are the types that Kevin alludes to when he says the anti-war protests became anti-Bush protests. These are professional protesters (by professional, I mean that they don’t have day jobs that get in the way). They get their protest groove on before they even know what they’re protesting. Anti-war? Go away, fascists! Anti-WTO? Fine, you dastardly multinational capitalists! Anti-GMO? Leave my food alone! Anti-Bush? Selected, not elected! Described in the movie PCU as “causeheads” by character Droz (Jeremy Piven), they’re the career protesters that you find more often on the left:

“These, Tom, are the Causeheads. They find a world-threatening issue and stick with it for about a week.”

The Tea Parties, at least traditionally, haven’t been dominated by Causeheads. They’ve been attended by regular people — like my boss’ wife — who see that in modern America, the train has derailed and they’re afraid of the carnage to come. It’s people who understand that something is very, very wrong — but they aren’t yet sure why or how to fix it. It is a protest movement in its infancy, and it’s largely populated by people who are more likely to eventually follow the side of someone like Ron Paul* than the “birthers”.

Yes, there are a lot of elements trying to grab hold of the Tea Party movement for their own purposes. But I believe that the modern Tea Party movement can largely ignore those elements, because the Tea Party movement is an effect, not a cause. It is not Joe the Plumber dragging people to Tea Parties; it is their own sense of morality and outrage at what is going on. It is a group of people who is sick and tired of government meddling, but endured in silence for several years while “their party” was in power. When Bush at the end of his term and Obama ever since have hit the throttle on government spending and control, they simply couldn’t take it in silence any more.

The Silent Majority is speaking up.

Stephen Gordon wrote a pretty expansive round-up of Tea Parties that he attended and that he had knowledge of for the Independence Day protests. Throughout that post, it’s clear that this is a grassroots movement, although that in some places it’s more dominated by the local GOP political establishment than in others. In many of these protests, elected officials were barred from speaking, allowing individual non-political Americans to speak.

That is a recipe for a true grass-roots movement. Of course, letting anyone with an opinion speak is also a recipe for a few of them to say things that you may not entirely support. Giving everyone who wants a microphone access to one makes for a bit of a messy message — just look at the blogosphere! When you get that many people together, you may not be 100% comfortable with everyone. Imagine if I’d attended a Tea Party protest. Would your typical mainstream Republican be happy being associated with a radical atheist anarchist who wants to legalize all drugs, let gays get married, and thinks Sarah Palin is the worst thing to happen to the Republican Party since the atrocious George W. Bush? I’d like to think of myself as a consistent advocate for liberty in the face of our government, but I would think that many mainstream republicans would be put off by the views I espouse.

But all that doesn’t change the fact that what is animating these protests is not birthers, or truthers, or Joe the Plumber. The animating force behind these protests is a latent hostility to big activist government that has been piqued by bailouts, stimulus, and the understanding that you must have confiscatory taxes or widespread inflation down the road to pay for it.

We are at a tipping point when it comes to these protests. April 15th was the first shot in a fight against obscene spending and painful taxes. The July 4 protests are a difficult case, however, because they were more of a protest to keep the fires stoked than anything else. On July 4, I think it was more about having a protest than it was about protesting a concrete action. That will soon change. There are strong rumors of a second stimulus**. We have seen the House pass Cap and Tax. We are watching Congress move forward on government health care. These are specific proposals that any advocate of limited government must fight vigorously.

Americans are seeing the Democrats move forward with the same big-government agenda and top-down central planning that we know does not work. We watch as the Republicans either compromise by only enacting the big-government agenda 80% as fast as the Democrats want, or by cutting pork-laden deals to get something in exchange for going with the flow. Nobody in this debate is standing up for the taxpayers, and that means that you can expect more of these Tea Parties in the future.

Will these Tea Parties be good for liberty? These Tea Parties are the effect of liberty-minded individuals expressing their ideals in concrete action, not a cause of those ideals. Thus, for all the efforts of Joe the Plumber, the birthers, or avaricious politicos to manipulate the Tea Parties for their own ends, the fact still stands: the Tea Parties aren’t about these sideshows. Their presence doesn’t change the ideals of those who attended, and in the grand scheme of things, will not materially affect the fight for liberty.

The Tea Parties have one benefit that hasn’t been discussed. If my account is accurate — that these protesters are the “silent majority” speaking up — the Tea Parties are working to mobilize and connect a group of people that largely exist below the political radar. The biggest difficulty I had as a libertarian prior to widespread internet activity was the feeling that maybe I was the outsider and that nobody else agreed. But through blogging (in general, and The Liberty Papers in particular) I am now connected to like-minded people and am building the networks and connections to make real change. The Tea Parties have the same affect on those who believe in small government. In these protests, friendships are made. Connections are forged. The on-the-ground networks that will one day help us to rein in the excesses of our leaders begin to take shape. This, above anything else, is what I hope we will see as the legacy of the Tea Party movement.

As for whether the Tea Parties will ultimately be successful, I cannot be sure. There is a large contingent of this country that wants the government to be their nanny and has no problem forcing the rest of us to pay for it, and I’m not entirely sure that they can be stopped at this late stage. If that contingent is successful, we may someday point at the Tea Parties in hindsight and say “if only they did X, or Y, we might have won.” But as it stands today, they’re one of the only concrete ways for us to get Congress’ attention, they’re one of the ways that the movers and shakers of the future will forge their networks, and they’re serving their purpose despite Joe the Plumber and the “birthers”.

* The boss I refer to was almost ready to support Ron Paul, but his mainstream Republicanism wouldn’t allow him to come over to Paul’s non-interventionist side of the argument. But I’m working on him — he’s got my copies of The Moon Is A Harsh Mistress and The Machinery Of Freedom to turn him in the right direction.

** The second stimulus might be in trouble already. Democrats are concerned that they can’t get both a second stimulus passed along with a massive health care proposal. They are already feeling the heat of increasing the deficit (likely due partly to Tea Party pressures) and they know that public opinion will heavily be opposed to a second stimulus (again likely due partly to Tea Party pressures). Public opinion, partly public opinion demonstrated through political protest, is making them at least pick and choose their priorities. They might be conceding defeat on Stimulus II, which would be at least an incremental success for small government types.