Norman Borlaug: The Man Who Saved A Billion People 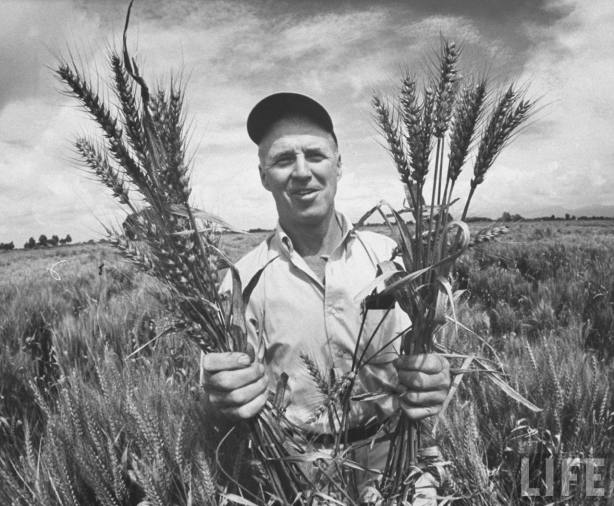 There are very men in history who we can say truly saved the world, but surely Norman Borlaug, who died yesterday at 95, counts as one of them:

Norman E. Borlaug, the plant scientist who did more than anyone else in the 20th century to teach the world to feed itself and whose work was credited with saving hundreds of millions of lives, died Saturday night. He was 95 and lived in Dallas.

The cause was complications from cancer, said Kathleen Phillips, a spokeswoman for Texas A&M University, where Dr. Borlaug had served on the faculty since 1984.

Dr. Borlaug’s advances in plant breeding led to spectacular success in increasing food production in Latin America and Asia and brought him international acclaim. In 1970, he was awarded the Nobel Peace Prize.

He was widely described as the father of the broad agricultural movement called the Green Revolution, though decidedly reluctant to accept the title. “A miserable term,” he said, characteristically shrugging off any air of self-importance.

Yet his work had a far-reaching impact on the lives of millions of people in developing countries. His breeding of high-yielding crop varieties helped to avert mass famines that were widely predicted in the 1960s, altering the course of history. Largely because of his work, countries that had been food deficient, like Mexico and India, became self-sufficient in producing cereal grains.

“More than any other single person of this age, he has helped provide bread for a hungry world,” the Nobel committee said in presenting him with the Peace Prize. “We have made this choice in the hope that providing bread will also give the world peace.”

The day the award was announced, Dr. Borlaug, vigorous and slender at 56, was working in a wheat field outside Mexico City when his wife, Margaret, drove up to tell him the news. “Someone’s pulling your leg,” he replied, according to one of his biographers, Leon Hesser. Assured that it was true, he kept on working, saying he would celebrate later.

Borlaug’s achievements are hard to understand as we sit here removed from time and space from when they happened, but they were truly remarkable:

In the late 1960s, most experts were speaking of imminent global famines in which billions would perish. “The battle to feed all of humanity is over,” biologist Paul Ehrlich famously wrote in his 1968 bestseller The Population Bomb. “In the 1970s and 1980s hundreds of millions of people will starve to death in spite of any crash programs embarked upon now.” Ehrlich also said, “I have yet to meet anyone familiar with the situation who thinks India will be self-sufficient in food by 1971.” He insisted that “India couldn’t possibly feed two hundred million more people by 1980.”

But Borlaug and his team were already engaged in the kind of crash program that Ehrlich declared wouldn’t work. Their dwarf wheat varieties resisted a wide spectrum of plant pests and diseases and produced two to three times more grain than the traditional varieties. In 1965, they had begun a massive campaign to ship the miracle wheat to Pakistan and India and teach local farmers how to cultivate it properly. By 1968, when Ehrlich’s book appeared, the U.S. Agency for International Development had already hailed Borlaug’s achievement as a “Green Revolution.”

In Pakistan, wheat yields rose from 4.6 million tons in 1965 to 8.4 million in 1970. In India, they rose from 12.3 million tons to 20 million. And the yields continue to increase. Last year, India harvested a record 73.5 million tons of wheat, up 11.5 percent from 1998. Since Ehrlich’s dire predictions in 1968, India’s population has more than doubled, its wheat production has more than tripled, and its economy has grown nine-fold. Soon after Borlaug’s success with wheat, his colleagues at the Consultative Group on International Agricultural Research developed high-yield rice varieties that quickly spread the Green Revolution through most of Asia.

Contrary to Ehrlich’s bold pronouncements, hundreds of millions didn’t die in massive famines. India fed far more than 200 million more people, and it was close enough to self-sufficiency in food production by 1971 that Ehrlich discreetly omitted his prediction about that from later editions of The Population Bomb. The last four decades have seen a “progress explosion” that has handily outmatched any “population explosion.”

Borlaug, who unfortunately is far less well-known than doom-sayer Ehrlich, is responsible for much of the progress humanity has made against hunger. Despite occasional local famines caused by armed conflicts or political mischief, food is more abundant and cheaper today than ever before in history, due in large part to the work of Borlaug and his colleagues.

Forty years later, there are entire generations that are alive thanks to the work that Borlaug did. I’d say that’s a pretty damn good accomplishment.

Reason did a great interview with Borlaug that you can read here.

And, here’s a short video describing Borlaug’s role in the “Green Revolution:”