Wayne Allyn Root Is Poison For The Libertarian Party

Wayne Allyn Root, the businessman and online gambling advocate who served as Bob Barr’s running mate on the Libertarian ticket in 2008, is casting his lot in with the birthers. As Radley Balko reports, Root promotes on his Facebook page his participation in a “trial of Barack Obama” that took place last week in New York: 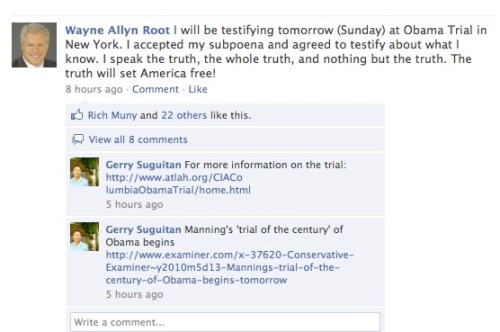 What’s this trial all about, you might ask. Well, here’s a description:

With thousands of spectators expecting to attend, Dr. James Manning’s ‘trial of the century’ of Barack Obama on charges of treason, fraud, and sedition begins tomorrow morning at 9 AM in New York City. Co-defendants in the trial are Columbia University and the CIA. In the last days of the run-up to the trial, Manning revealed that he has sources in government that will testify against Obama, Columbia, and the CIA. He also reported explosive information that Barack Obama has used upwards of 20 different Social Security numbers during his life. Witnesses are expected to testify at the trial that Barack Obama was never a student at Columbia University, although he received a degree from the school. Dr. Manning claims that Columbia, therefore, is an accomplice to fraud. Other witnesses are expected to testify that Obama fails the Constitutional test for Presidential eligibility due to the fact that his father was a British subject at the time of his birth and his mother was not old enough to confer citizenship when he was born. A dramatic new revelation, however, may serve to re-emphasize the importance of the trial. The state of Hawaii, according to sources, did NOT accept his birth registration that was filed, despite issuing a ‘statement of live birth.’

This is the same James Manning who became famous last year when he started referring to President Obama as a “long legged mack daddy” and who joined Birther Queen Bee Orly Taitz last year at a protest that nobody attended against Fox News for “covering up” the birther story. Root hasn’t said anything one way or the other about the birth certificate issue that I’ve been able to find, but he does seem to buy at least part of the argument: 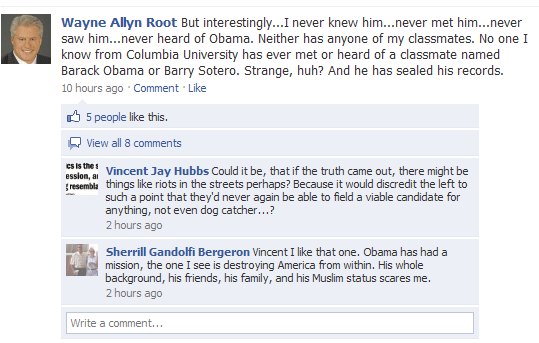 Of course, the possibility that Root and Obama may have traveled in different circles at Columbia, a school that had thousands of undergraduates at the time, does not seem to have occurred to Wayne at all, since he’s expressed this belief before. Why is this important ? Well, this year, Root is running for Chairman of the Libertarian National Committee, and he’s made it clear that this is merely a stepping stone to the 2012 nomination for President. Based on stuff like this, and the impression I got from reading Root’s The Conscience of a Libertarian

, which I will be posting a review of in the very near future, I’ve got to completely agree with Radley Balko’s take on this:

I’m not a member of the Libertarian Party, though I’ve spoken to several state conventions over the last couple years. I have my problems with the party, but I’d like to see it do well, in part because for better or worse the LP has a significant impact on how people view libertarianism.

So let’s be clear about this: If Wayne Allyn Root becomes the face of the LP, it will be an unmitigated disaster for the party. It will also likely do quite a bit of damage to the public perception of libertarianism as a philosophy.

This is batshit crazy, off-the-charts conspiratorial hogwash. There are plenty of legitimate reasons to criticize Barack Obama. Root has chosen to dip into angry-white-guy, “Obama’s a secret Muslim” absolute and utter lunacy.

Libertarians: The man is a nut. Associate with him at your peril.

Originally posted at Below The Beltway