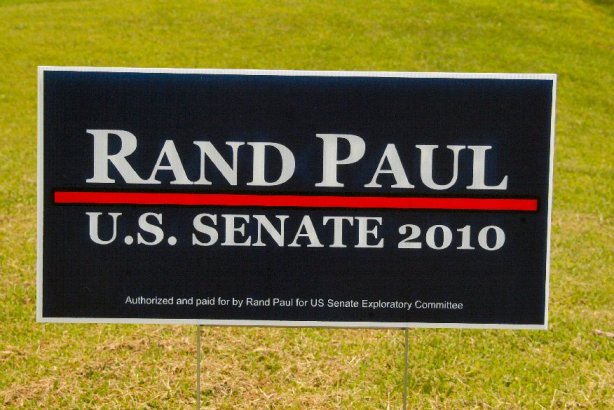 Of all the races that will come to an end to tomorrow night, the one that may be the most interesting is the Republican Senate Primary in Kentucky, where the race has essentially become a proxy for the battle between the Establishment GOP and the Tea Party Movement:

FLORENCE, Ky. — Rand Paul grabbed a microphone, climbed onto a short brick wall and told a gathering crowd of supporters to brace for an Election Day uprising on Tuesday.

“There’s a Tea Party tidal wave coming. It’s already hit Utah and it’s coming to Kentucky,” Mr. Paul said, delivering a confident pep talk here in the closing hours of the Republican primary for a United States Senate seat. “The day of reckoning is coming. We cannot elect the same old politicians without getting the same old mess.”

If his confidence is borne out by victory, it would mark one of the most important moments yet for the Tea Party, the anti-Washington, anti-big government movement that was partially inspired by the quixotic 2008 presidential race of his father, Representative Ron Paul of Texas.

Establishment Republicans — including Senator Mitch McConnell of Kentucky, the minority leader, former Vice President Dick Cheney and the Chamber of Commerce — have united in opposition to Mr. Paul, but optimism was diminishing that their candidate, Trey Grayson, could prevail.

The Paul-Grayson race has been fairly interesting to watch, if only because of the manner in which it’s laid bare the differences between the establishment GOP and the Tea Parties. Grayson, Kentucky’s Secretary of State and a long-time Republican activist, has received support from Washington Republicans like Dick Cheney and Mitch McConnell. On the other hand Rand Paul, a Lexington, KY eye surgeon who’s main involvement in politics prior to today was during his father’s campaigns, has garnered the support of Senators Jim DeMint and the retiring Jim Bunning. Most recently, Focus on the Family founder James Dobson took the unusual step of switching his endorsement from Grayson to Paul after revealing that an unnamed party, later identified as Mitch McConnell, had been misleading Dobson about Paul’s views on abortion.

Despite the establishment attacks, Paul has maintained a consistent lead in the polls, and, based on where the race stands with one last day of campaigning to go, looks poised to score a decisive victory tomorrow night. Trey Greyson, meanwhile, has taken the rather unusual (for a Republican at least) step of attacking Fox News in the final hours of the campaign:

By frequently putting Rand Paul, the son of Ron Paul and Grayson’s opponent, on its air, Grayson says the network has all but endorsed Paul and given him an easy way to tout his candidacy without actually meeting Kentucky voters in person.

“His dad had these phenomenal contacts, so … he’s on Fox News every couple of weeks with softballs,” said Grayson. Imitating an anchor’s voice, Grayson said the questions are softballs such as, “Rand, tell us about health care, you’re a doctor. Rand, tell us about the tea party.”

When a politician starts saying things like that, especially when there are only a few hours to go before voting starts, you can pretty much conclude that they’ve seen the last of the internal polls and they’re pretty sure they’re going to lose.

As for Paul himself, we’re likely to be hearing much more from him after Tuesday night. There’s still a General Election campaign to get through in November, of course, but the odds of a Republican losing in statewide race Kentucky in a year that seems destined to be good for Republicans in general seem pretty darn low to say the least. In the meantime, other Republicans might be interesting in figuring out how he’s accomplished the seeming impossible:

The political genius of Paul is his ability to cultivate a narrative that speaks to all strains of the Tea Party movement at once. After all, the libertarian purists who loved Ron Paul’s dissident truth-telling are not natural allies of the Limbaugh Dittoheads who dismissed him as an eccentric. He sings his libertarianism in the key of Glenn Beck – and he is writing a Republican playbook for the tea party era, turning grassroots energy into electoral power. Now, less than a week before the primary, polls show Paul’s lead over Grayson approaching 20 points. He also leads both of his potential Democratic challengers in the general election polling

It’s the kind of fusion that Republicans in other states will need to create if they’re going to prevail as well, and it all started in Kentucky.