July 22, 2010
WASHINGTON, DC — Picketers holding anti-Christian placards marched near NARAL headquarters in Washington today, denouncing plans to erect a right-wing Christian church within a block of the abortion rights group. Heated words were exchanged between supporters of the place of worship; luckily physical altercations were avoided in this escalating battle. 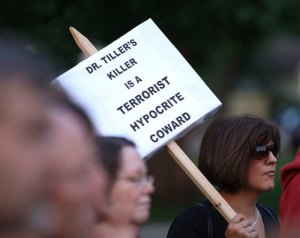 Tension has been brewing since late last year, when plans for the Lutheran-denomination church were unveiled in planning commission meetings. NARAL-friendly Councilwoman Diana Matthews had been quietly working to stall the plans, requesting additional information about the parking and infrastructure requirements of the planned structure, but the architect and engineer on the project quickly provided evidence that the demands of the new structure would not materially change from the property’s previous structure.

As the project has neared breaking ground, opponents and supporters have taken to the streets. “It’s an affront to the freedom that NARAL protects that these Christo-fascists would try to base their hate so close to our headquarters,” said Susan Colona, a NARAL employee. “It’s clear that they’re moving so close in order to threaten and intimidate the workers here at NARAL. It’s chilling, in the wake of the senseless murder of Dr. George Tiller, that they’re willing to escalate their actions.”

Protesters carrying signs with slogans such as “Go Back To Kansas” and “Keep Your God Out Of My Uterus” marched outside the headquarters. Supporters of the church countered nearby with opposing signs, “Abortion Is Murder — An Eye For An Eye” and “We Protect Those Who Can’t Protect Themselves.”

Pro-choice US Representative Donna Edwards (D-MD) sides with NARAL. “The actions of the picketers in support of this church are a clear example of hate speech. We are a country that values freedom of religion, and I don’t believe we can legally stop this congregation from forming, but I am deeply saddened that the church would choose such a site for their home.”

Pastor Elijah Williams, who would be heading the proposed church, doesn’t understand the fight. “While we as a church are generally against the practice of abortion, many within the ELCA are willing to make exceptions for circumstances such as rape and the health of the mother. In fact, Dr. George Tiller was a member of the ELCA, and we have publicly condemned Scott Roeder for his unconscionable actions. We are a peaceful church, and chose the site of our church because we thought it was the best place for our home, not because of its proximity to NARAL.”

Pastor Williams even suggested that the extremist protestors antagonizing NARAL were not from the ELCA, but rather sent by the Westboro Baptist Church, an organization known for sending protestors to funerals of US Servicemen killed in combat.

The fight doesn’t appear to be waning. NARAL has been searching for legal ways to fight the church, including potentially having the entire block declared a historic landmark due to its age. Stephen Simpson, a lawyer who had previously advised the ELCA on other matters, doesn’t see this as cause for hope. “What should have been a very simple process of building a home for a budding congretation is now likely to be derailed. Once national politics and the legal system become involved, this will become a circus. I hope the church and NARAL can come to some agreement to avoid this outcome.”

Given the contention between the parties, though, this appears unlikely at this time.