Wayne Allyn Root: Religious Freedom And Property Rights ? Not For Them Muslims ! 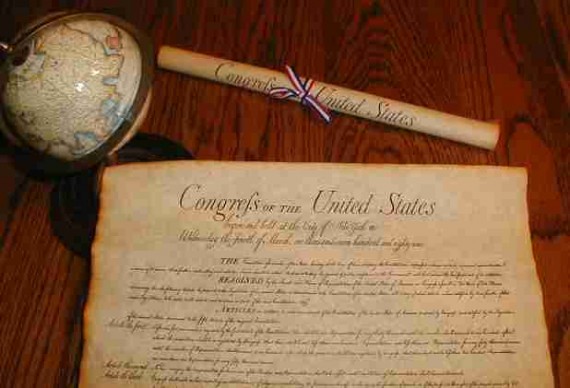 I’ve written before about the questionable libertarian allegiances of Wayne Allyn Root, the LP’s 2008 Vice-President nominee and currently an At-Large member of the Libertarian National Committee. Now, Root is out with a blog post about the so-called “Ground Zero” Mosque that is anything but libertarian in it’s sentiments and it’s conclusions, and it should be of concern to anyone who thinks that Root represents the direction the Libertarian Party should take in the future.

Root starts out with the same sort of milquetoast paeans toward religious liberty and property rights that we saw in his book, but he quickly goes off in a direction that makes it clear that, on this issue, he is more in line with Sarah Palin and Newt Gingrich than any Libertarian (or libertarian):

This proposed building of a mosque on hallowed ground is an ATROSITY towards America. To build a celebration of Islam within steps of 9/11 does nothing to increase religious freedom…it inspires hatred, divides our cultures, and increases the odds of violence and hate crimes. Common sense suggests this mosque, being built in this specific location, is NOT being built as a sign of friendship between Muslims and Americans…but rather as a sign of the lack of respect…a belief in our weakness…and an attempt to embarrass and belittle us. The financial district of Manhattan is not a residential area with a large number of Muslim residents for the mosque to serve. Therefore common sense suggests that the only possible reason to build it there (rather than in Brooklyn or Queens where there are large Muslim populations) is to show Muslim contempt for Americans by building a monument to Islam in the shadow of the site of their greatest triumph over America.

It is an offense to build a mosque in that location- an offense to all Americans (including Muslim Americans), all Christians and Jews, all relatives of 3000 dead heroes at the World Trade Center.

First of all, Root is just completely wrong on the facts here. The Cordoba House isn’t at all what he and the project’s critics have represented it to be:

The building’s planners, the American Society for Muslim Advancement and the Cordoba Initiative, have said it’s modeled on religious and community centers such as the YMCA, and that the 13-story, $100 million building would also include an arts center, gym and a swimming pool, as well as a mosque. It would be two blocks away from Ground Zero.

Two blocks away and nowhere within line of sight of the area where the attacks actually occurred.

The attempt by Root, Palin, Gingrich, and other opponents of this project to call this a “Ground Zero” mosque are therefore a complete misrepresentation of the location of the project. A misrepresentation obviously intended to lead people to think that a mosque is being built on the location of the World Trade Center rather than being constructed inside an already-existing decades old building as part of a larger project that would be open to the public as a whole. For that reason alone, Root’s appeals to emotionalism and the supposed “atrocity” that this project represents should be rejected as silly and, quite frankly, dishonest.

Yes, private individuals and organizations have the right to build houses of worship with their own funds. But one has to wonder where the money is coming from to build a 15-story building on some of the most expensive real estate in the country. We Americans believe in the separation of Church and State. If it turns out that this project is sponsored by a foreign government — either directly or through a state-sponsored organization that engages in terrorism — than the idea of this being an issue of religious freedom is a sham and an argument can be made that our Constitution would actually prohibit this mosque from being built.

Except, of course, for the fact that there is no evidence that this is the case. More importantly, there is no connection between the organization that wants to establish the center and anyone associated with the September 11th attacks.

In the end, Root falls into the same anti-Muslim hole that Palin, Gingrich, and others have. All he’s really saying is that we can’t let them scary Muslims build what they want to in a building they own. While he doesn’t go as far as Gingrich and Palin in calling for government action to stop the project, he adopts the same attitude of religious intolerance and, for any libertarian, that’s just unacceptable.

Let’s contrast Root’s paean to fear-of-Muslims with something published this past weekend by Libertarian National Committee Interns Marissa Giannotta and Josh Roll:

The attacks on 9/11 and its victims should not be ignored, however, we cannot lay blame on the entire Islamic community for the terrible acts that occurred on that day. The Islamic cultural center would be a great way for others to learn about Islam and ultimately build bridges between the United States and the Muslim World. Islam by principle is not an extremist religion and not all Muslims should be portrayed in such way.

More importantly, those who have ownership of the site should have the freedom and the right to build what they wish. Property rights should be respected as a right for all citizens, not just a few. Our platform clearly states, “The owners of property have the full right to control, use, dispose of, or in any manner enjoy, their property without interference, until and unless the exercise of their control infringes the valid rights of others.” The Islamic cultural center does not infringe on the rights of others.

As Steven Chapman describes in his article at Reason, “Palin is not a slave to intellectual consistency. Change the church to a mosque, and put it a couple of blocks from the site of the World Trade Center, and she suddenly loses all patience with the rights of religious believers.”

Libertarian Party candidate for New York State Governor, Warren Redlich, also weighed in on the issue stating, “…I have asked some people if they would object if it was a synagogue, church, Jewish community center, or YMCA. All of them say that wouldn’t bother them. So the reason for opposing this facility is because it’s associated with the Muslim religion. That violates freedom of religion under the First Amendment.”

As Thomas Knapp notes, this is a litmus test for all libertarians (Big-L, or small-l):

If you don’t support private property rights and freedom of religion, you aren’t a libertarian.

Cordoba House, the project being fraudulently referred to as a “mosque” by those attempting to prevent its construction, is planned for construction on private property and with private funds.

The opponents of Cordoba House are attempting to stop its construction by persuading a government board to declare the building currenly standing at the project’s prospective location “historic” so that the owners can be forced to “preserve” it and forbidden to demolish it and build a structure more to their liking there.

That, Mr. Root, is libertarianism. Perhaps you’re in the wrong party.

Update: Jason Pye has weighed in with his own take:

Property rights and religious freedom are among the principles of a free society, basic liberties are supposed to be protected from the mob. To hear of anyone casting them aside is concerning. For a libertarian to do it is a betrayal of these core values that we are supposed to believe in.