“No person shall be held to answer for a capital, or otherwise infamous crime, unless on a presentment or indictment of a Grand Jury, except in cases arising in the land or naval forces, or in the Militia, when in actual service in time of War or public danger; nor shall any person be subject for the same offense to be twice put in jeopardy of life or limb; nor shall be compelled in any criminal case to be a witness against himself, nor be deprived of life, liberty, or property, without due process of law; nor shall private property be taken for public use, without just compensation.” – Amendment V of the U.S. Constitution 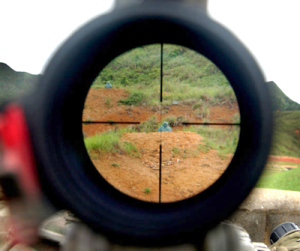 I don’t know how I missed this, but apparently the 5th Amendment was repealed a few months back with very little concern on the part of the media. Or maybe this was a big story back in February and I just wasn’t paying attention. I have been quite busy lately but I still don’t see how I missed this most disturbing power grab on the part of the Obama administration to date: the power for the president to order the assassination of American citizens without trial*.

If you missed this like I did and have read about this for the first time here, you may believe this sounds like some kooky black helicopter Soldier of Fortune conspiracy propaganda. When I heard about this the first time from Glenn Beck (of all people) on Judge Andrew Napolitano’s Freedom Watch, I thought it was probably another one of Beck’s over the top Obama boogey man theories. I thought surely if a president, even this president, were to do such a thing as order CIA snipers or perhaps Predator drones to take out an American citizen without trial, even the media on Left would be scandalized by such a policy.

As it turns out, Beck was right. When I entered the phrase “Obama can assassinate Americans” into a Google search, I did find at least one Left wing blog, Democracy Now! podcast hosted by Amy Goodman back in February explore this issue. And to Congressman Dennis Kucinich’s (D-OH) credit, he made an appearance on the podcast to explain why he isn’t giving President Obama a pass.

Well, I think its incumbent upon the Attorney General to explain the basis in law for such a policy. Our Constitution’s Fifth Amendment, our Seventh Amendment, our Fourteenth Amendment all clearly provide legal protections for people who are accused or who would be sentenced after having been judged to be guilty. And what’s happened is that the Constitution is being vitiated here. The idea that people are—have—if their life is in jeopardy, legally have due process of law, is thrown out the window.

And, Amy, when you consider that there are people who are claiming there are many terrorist cells in the United States, it doesn’t take too much of a stretch to imagine that this policy could easily be transferred to citizens in this country. That doesn’t—that only compounds what I think is a slow and steady detachment from core constitutional principles. And once that happens, we have a country then that loses its memory and its soul, with respect to being disconnected from those core constitutional principles which are the basis of freedom in our society.

Not everyone on the Left is as willing to hold the Obama administration accountable though. Salon.com writer Glenn Greenwald (also a guest interviewed in the above podcast), one of the few columnists to give this policy the condemnation it deserves, wrote a very disturbing piece to remind those who were (rightly) critical of the Bush administration’s policies concerning extraordinary rendition, holding “enemy combatants” indefinitely without trial (including American citizens), warrantless wiretapping, and so on, should be at least as critical of Obama’s policy which goes even further.

“Today, both The New York Times and The Washington Post confirm that the Obama White House has now expressly authorized the CIA to kill al-Alwaki no matter where he is found, no matter his distance from a battlefield. I wrote at length about the extreme dangers and lawlessness of allowing the Executive Branch the power to murder U.S. citizens far away from a battlefield (i.e., while they’re sleeping, at home, with their children, etc.) and with no due process of any kind.

And what about all the progressives who screamed for years about the Bush administration’s tyrannical treatment of Jose Padilla? Bush merely imprisoned Padilla for years without a trial. If that’s a vicious, tyrannical assault on the Constitution — and it was — what should they be saying about the Nobel Peace Prize winner’s assassination of American citizens without any due process?

When Obama was seeking the Democratic nomination, the Constitutional Law Scholar answered a questionnaire about executive power distributed by The Boston Globe’s Charlie Savage, and this was one of his answers:

5. Does the Constitution permit a president to detain US citizens without charges as unlawful enemy combatants?

[Obama]: No. I reject the Bush Administration’s claim that the President has plenary authority under the Constitution to detain U.S. citizens without charges as unlawful enemy combatants.

Even though I did not vote for Obama in 2008 and was very critical of his policy positions at the time, I thought he would at least be an improvement in the area of civil liberties. I couldn’t have been more wrong. It seems that rather than rolling back these Bush era unconstitutional power grabs, Obama has grown accustomed to them and decided to take these powers to the next level: killing Americans he believes to be enemies of the state.

Perhaps there is room to debate whether or not foreign suspected terrorists deserve all the legal protections of our courts but the idea of killing American citizens without trial most certainly is not debatable. If our government does anything well its identifying individuals and putting them in prison and/or sentencing said individuals to death. This is done successfully every day in our criminal justice system. We need not worry that many actual terrorists will escape going through the criminal justice system provided that the prosecutors have a minimum standard of proof and a jury of average intelligence.

Even as badly broken as our criminal justice system is, this is our system. Ordering the killing of American citizens even in an “emergency” is not among the powers provided to the president under the Constitution (I just double checked) and is not a suitable substitute.