I don’t know how much play if any this story has received in the national media but it has been a subject of local news and talk shows here in the Denver media market. Basically, an 11 year old boy drew a disturbing picture for his school counselor and later that evening, the boy was hauled off to jail in handcuffs and booked – fingerprints, mug shots, and all as if he were a hardened adult criminal. The video below goes into more detail.

Local Denver talk show host Peter Boyles, as a result of this case and others like this case, has concluded that perhaps it would be prudent for school students of all ages to bring some sort of “Miranda Card” like the one shown below to be presented to school administrators or even (especially) the police. Boyles said that until just a few years ago, he was of the opinion that kids should be taught to trust the police and answer any questions they might have – just as the parents of this young boy did. Now he says that perhaps we should teach our children the exact opposite. 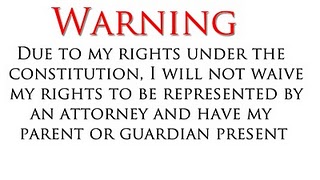 Is this really what it’s coming to now – having to teach our elementary age children the “10 Rules for Dealing with Police” even before they are taught the facts of life?

Maybe so. But there is also another lesson that might be useful for children and hopefully this boy has learned this lesson: don’t be afraid to question authority figures. In the case of this boy, all the authority figures failed him. His counselor failed him by encouraging to draw the picture in the first place without offering any words of caution. The school administrators should have coordinated their approach with the counselor rather than involving the police. The boy’s parents encouraged him to speak openly with the police who then used unnecessary heavy handed tactics that undoubtedly traumatized the child. His trust was betrayed by them all.

Clearly, this is a troubled boy who needs help and was already receiving therapy before government intervention. Why not let those professionals who actually know what they are doing do their jobs?

It’s a very sad commentary to be sure.