“I would remind you that extremism in the defense of liberty is no vice! And let me remind you also that moderation in the pursuit of justice is no virtue!” – Barry Goldwater

Ron Paul’s supporters and detractors would probably agree that many of his positions are out of the main stream of modern political thought. By definition, this makes Ron Paul and those of like mind extremists.

Josh Harkinson, writing for Mother Jones has put together a list of what he considers “Ron Paul’s 15 Most Extreme Positions.” Among these “extreme” positions are “eviscerate entitlements” (such as Social Security, Medicare, and Medicaid), eliminating entire departments (ex: Education, Health and Human Services, Energy, etc.), “enable state extremism” (allow the states to determine issues like gay marriage and school prayer rather than address these issues at the federal level), end the war on (some) drugs, and Ron Paul’s statements against the Civil Rights Act and the Americans with Disabilities Act. 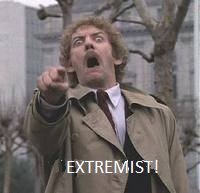 1. Most people approve of X
2. Therefore, X is true

By calling someone an extremist or calling his/her positions extreme is at least a variation of this fallacy: “Most people disagree with Ron Paul on entitlements, therefore; Ron Paul is wrong.”

To be sure, most of the items on the list of 15 that I fully agree with, others that raise my eyebrows (ex: I haven’t investigated number 4 yet) and others that I disagree with* but whether or not each is an extreme has nothing to do with if I agree or not. Whether a position on an issue is extreme or not is entirely beside the point! Rather than calling a position extreme, it should be debated on its merits or lack thereof.

Popular opinion, especially in American politics, is a very fickle thing. Consider how much attitudes have changed over the history of the U.S. It was once considered perfectly okay for one human being to own another. To call for the abolition of slavery in one era was considered extreme, in another controversial, in yet another popular. Any person who would say today that the institution of slavery should be resurrected would now be called an extremist (among other things).

What does this change in popularity concerning slavery tell us about the morality of slavery? Was it a moral institution because it was accepted as part of the culture and perfectly legal but now immoral because most would say that slavery is one of the great shames in our nation’s history?

Slavery was as immoral when Thomas Jefferson owned slaves as it would be today. Popularity has no bearing on questions of right and wrong.

Obviously, there are many more examples of how popular opinion has shifted over time. These positions of Ron Paul’s that Josh Harkinson calls extreme today could become controversial (i.e. having nearly as much support as those who are opposed) or even mainstream in the future. This is likely a great fear of Harkinson and those of his ilk as it’s much easier to call Ron Paul, libertarians, or libertarian positions extreme than it is to confront them directly.

Yes, Ron Paul is an extremist but he is in some very good company. We can safely say that the founding fathers – the original tea partyers were the extremists of their day. They certainly couldn’t be described as mainstream. The words penned by Thomas Paine in Common Sense and later Thomas Jefferson in the Declaration of Independence were downright treasonous!

Actually, I consider being called an extremist a badge of honor; so much so that I have put a bumper sticker on my vehicle declaring myself as such (I bought the sticker below from LibertyStickers.com).

The day my views become mainstream will be the day I have to seriously reevaluate my views because I doubt they will be mainstream any time soon. But even though my views or those who promote them don’t win very often on Election Day doesn’t make my views wrong…just unpopular.

*Ron Paul relies entirely too much on the states on civil liberties issues IMO. Rights ought not to be subject to a vote at any level of government