I saw this on my Facebook news feed from the Ron Paul FB page yesterday: 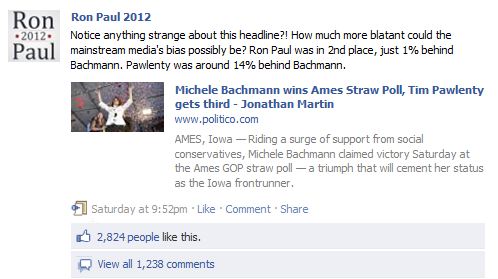 Now that I have had a chance to follow the link today, the Politico article headline now reads “Michele Bachmann wins Ames Straw Poll.”

It seems to me that Ron Paul’s supporters called them on it and Politico had the headline changed.

The Paul campaign does raise a great point here. I can’t remember the last time I’ve ever seen a headline reporting on any contest that listed 1st and 3rd place while leaving out who came in 2nd. Then when you consider that 2nd place is a statistical tie (Bachmann beat Paul by only 152 votes) while Tim Pawlenty had 2,530 fewer votes than Bachmann, one has to wonder why the headline writer would write such a headline if s/he didn’t have some sort of anti-Paul (or pro-TPaw) bias.

Personally, I believe the bias is more than anti-Paul but anti-libertarian (or anti-anyone who doesn’t tow the big government Republican Party line). Ron Paul would be ignored the way Gary Johnson is if Paul didn’t have such a strong following or wasn’t competitive with establishment candidates (though I wouldn’t really call Bachmann an establishment candidate either). Even as Paul has as an impressive showing as he did in Iowa, there are still those in the MSM who treat him as though he is a 1%er who doesn’t merit any serious attention. It wasn’t that long ago that talk radio host/blogger Hugh Hewitt wanted the RNC to take over the debates and “exile” Ron Paul (along with Herman Cain and Gary Johnson) from the debates.

But in the end, the results are what they are. If the Iowa straw poll is any indication, Ron Paul is a force to be reckoned with in this primary battle. Tim Pawlenty wasn’t as encouraged by his 3rd place finish in the straw poll as perhaps the Politico headline writer was. In fact, Pawlenty was so disappointed in the results that today he dropped out of the race. Gary Johnson says Pawlenty “should be applauded for a great effort” and respects Pawlenty’s decision but also said “it’s too early to be picking winners and losers” indicating that he won’t be wrapping up his campaign anytime soon.

I tend to agree. It is still very early. Tim Pawlenty made his exit just a day after Rick Perry announced that he too is getting into the race. And who knows what Sarah Palin will do?

My frustration is that it seems that the media is trying to decide which candidates are worthy of being covered and which are not. Leaving Ron Paul out of a headline he logically should have been in or ignoring Gary Johnson almost entirely is but a couple of examples. Newt Gingrich had a very valid point in the Iowa debate when he said that the campaign coverage should have more to do with ideas than on the horse race aspect. I really couldn’t care less about the inside baseball B.S. concerning which campaign is losing staff members or who gives the best stump speech. What I want to know is how candidate x plans to govern as president or explain why s/he would be better for our liberty and our economy than the current president.

Just as I was about the click on the publish button for the above post, I saw this video that I thought was very interesting and seems to confirm my suspicions about the media.