I Didn’t Even Know Gary Anderson Was Running in 2012!

I came across this in this discussion thread at the Agitator that I thought was too good not to share:

I think this is exemplifies one of Gov. Johnson’s problems with name recognition. Both “Gary” and “Johnson” are such ordinary, everyday names. There’s a Gary Johnson who is an insurance agent who has an office not far from where I live. His name could just as well be Bob Smith or Bill Jones. If he were elected president, he would be the third President Johnson in U.S. history.

Names like Mitt Romney, Newt Gingrich, and Rick Santorum are uncommon enough that they stick in your memory once you have heard or seen the names in the media. I mean really, I have never met anyone who had a name like Mitt or Newt. These names are uncommon enough I don’t even have to hear someone say the last name to know s/he is referring to the former governor of Massachusetts and former Speaker of the House respectively. As for Ron Paul, while in isolation both names are quite common, he has the whole two “first names” thing going on.

Maybe the best thing Gov. Johnson could do is do what another famous Johnson did… 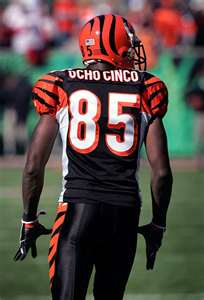 Change his last name to Ochocinco.

There. Gary Ochocinco. That ought to help boost his name recognition!