There’s very little doubt in my mind that the MSM and the G.O.P establishment have been doing all they can to keep certain candidates from challenging the establishment and ultimately win the nomination. Early in the campaign I wrote a response to Hugh Hewitt’s post where he suggested that the RNC should exile Herman Cain, Gary Johnson, and Ron Paul from the remaining debates. His argument was that these were all “marginal” “1%er’s”* who “don’t have a prayer” of winning the nomination.

Isn’t it interesting that “1%er” Ron Paul has won several straw polls and has even cracked the top 3 or 4 at various points during the campaign and is almost always polling in the double digits? Ron Paul is hardly a 1%er despite efforts on the part of the sponsors to limit his exposure (in the most recent debate, Paul had a whopping 89 seconds to make his case on national television).

Then there’s Herman Cain the other “marginal” candidate who until the most recent couple of weeks following accusations (whether legitimate or not) of sexual harassment along with some other missteps on foreign policy was neck and neck with the establishment favorite Mitt Romney. Cain may have fallen from grace but he isn’t a 1%er without a prayer of winning neither.

The only one of the three who is truly a 1%er unfortunately is Gov. Gary Johnson. Of the three Johnson is the only one who has been successfully excluded from all but two of the nationally televised debates. Up to this point, the Johnson campaign has encouraged supporters to write and call the debate sponsors to encourage them to reconsider but to no avail. In true libertarian freedom of association fashion, Johnson, though disappointed with his exclusion, respected the right of the debate sponsors to exclude him. 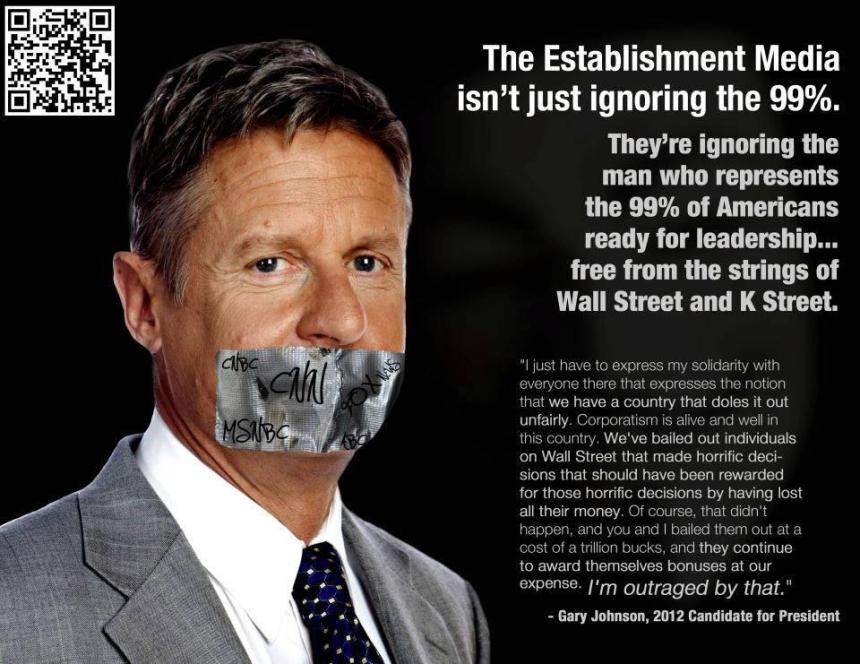 Here are some excerpts from the complaint filed with the FEC:

On Saturday, November 12, 2011 Respondent CBS televised on its national network another debate, but instead of including all leading candidates has elected to arbitrarily and capriciously exclude some candidates and include others. In so doing, CBS is, without any other explanation, choosing to support certain candidates. By excluding viable candidates like Complainant, who has been included by cable networks in their debates CBS is directly and significantly supporting those candidates it favors, and advocating the nomination of one of their favorites and opposing the nomination of Complainant, whom CBS evidently disfavors. In so doing, CBS is making an illegal corporate in-kind contribution to those favored candidates. The value of this contribution vastly exceeds the contribution limit that applies to any category of lawful donor.

2 U.S.C. §431 (8) (A) (i) defines a “contribution” as “any gift, subscription, loan, advance, or deposit of money or anything of value made by any person for the purpose of influencing any election for Federal office.” No rational person could possibly argue that exposure during an hour-long debate televised in prime time on the CBS network is NOT something of value. Indeed, CBS sells advertising spots during prime time for huge sums, and makes and reaps significant revenues in doing so. By any standard, this airtime is a thing of value within the ambit of that phrase in this statute. If all viable candidates were being included in the debate that might lead to a different conclusion, but by excluding candidates CBS disfavors –opposes—and including those it favors –supports—Respondent is violating the Act.

I believe the Johnson campaign has a very valid point in this complaint to the FEC. Whether we like the campaign finance laws or not, Johnson is bound by them and must abide by them; it only seems fair that CBS must be legally obligated to follow them as well.

Gov. Johnson’s complaint to the FCC, however; is much more bothersome IMHO.

The Federal Communications Commission has the authority to regulate fair access to the airwaves of broadcast by network television networks.

The public owns the airways over which CBS broadcasts, and the public deserves to be free from bias- favoring some candidates over others- as well as illegal support of certain presidential candidates on national network television. Unfair access to the airwaves of broadcast by network television is clearly an issue within the FCC’s mandate. The illegal corporate contribution CBS is making in including some candidates and not others is addressed in a separate formal complaint to the Federal Elections Commission. The FCC should take appropriate action against CBS.

The public owns the airwaves? Yes, I understand that this is the accepted conventional wisdom but this is not something I would have expected from perhaps** the most libertarian leaning candidate to ever seek the nomination for the Republican Party!

I fully and completely understand the frustration because as a Gary Johnson supporter, I too am frustrated with how the Johnson campaign has been treated by the establishment. I take it damn personally that the candidate who best advocates and represents my views has been excluded from these debates while big government, freedom hating, torture supporting, war mongering fools like Rick Perry and Rick Santorum make idiotic assertion after idiotic assertion on national television often unchallenged . I often wonder if Johnson might have had similar success as Ron Paul or Herman Cain had his (and by extension, my) voice been heard in these debates.

We will probably never know.

But to write the FCC and make the argument that Gov. Johnson has some sort of right to participate in the debate because the public “owns” the airwaves just makes me cringe. This comes far too close to the so-called “Fairness Doctrine” for my comfort. The public doesn’t own the airwaves, the broadcasters do. CBS buys the licenses and is supported by advertisers – not the public.

If the debate was sponsored and aired on PBS and/or NPR the Johnson campaign would have a legitimate point because those stations are supported by the public (i.e. taxpayers and viewers like you) but this is not what we are talking about here.

Maybe the Johnson campaign believes the ends justify the means but I would rather Gary Johnson lose following his small government principles than win by compromising them.

**Though I’m sure Ron Paul supporters would disagree