Immigration, especially of the illegal variety, is one of those important issues that is difficult to have a rational discussion about. The discussion quickly devolves into the need to “secure” the border with a wall or fence…at least on the Southern border (the Northern border is more porous but I don’t recall the last time anyone mentioned anything about building a wall or fence there). Though a fence probably would slow down illegal border crossing somewhat, all a determined border crosser needs to get over a 20′ wall is a 21′ ladder (or a shovel and a great deal of patience). Of course a fence would have zero impact on those who overstay their visas.

Most opponents of illegal immigration say that before any reforms to immigration policy are made, the border needs to be secured (the points mentioned above notwithstanding). I happen to think they have it backwards. If anything, immigration policy should be focused on those who are here already. The idea that every single illegal immigrant can be rounded up and sent back to their country of origin is absurd. There are simply too many of them.

I think the important question that should be asked is: why aren’t these illegal immigrants not going through the immigration process legally? Why would so many people risk everything to pay a Coyote to sneak their families over the border when there is a process in which they can legally immigrate to the U.S.? What part of “legal” immigration don’t they understand?

This infographic (click on the image to enlarge) by Reason does a great job illustrating just how difficult going through the U.S. immigration process is (for the rest of us who don’t know). 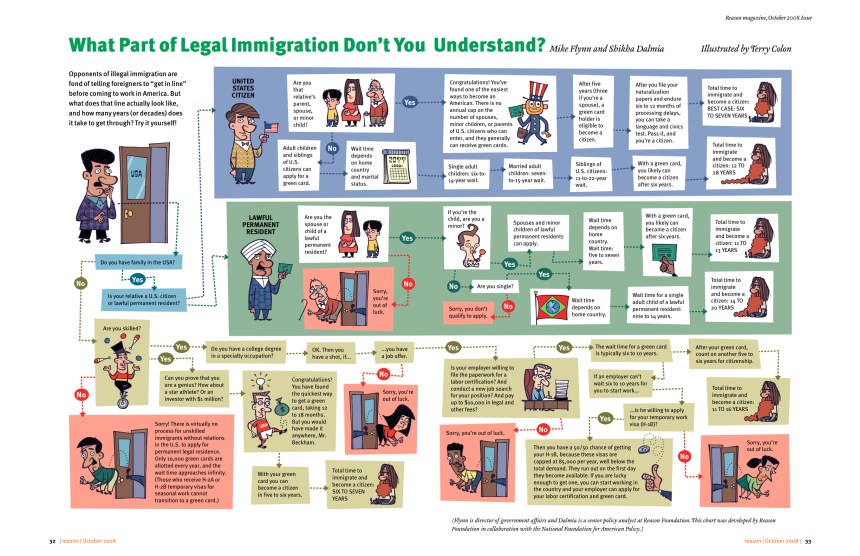 This problem isn’t just limited to the U.S. The leading UK immigration solicitors agree that making an immigration process can be a hugely difficult and stressful process. Maybe if the immigration process was a little less of a cumbersome, bureaucratic nightmare, maybe fewer people would break the law in coming here.