Greetings All – Sorry in Advance!

Good day to my fellow lovers of liberty! My name is Matthew Souders – I am a lifelong conservative, but don’t let that fool you into thinking I’ve always held the same beliefs – or that I always knew what I was talking about. Or that I know what I’m talking about now. Warning – headshot below may cause brain damage! 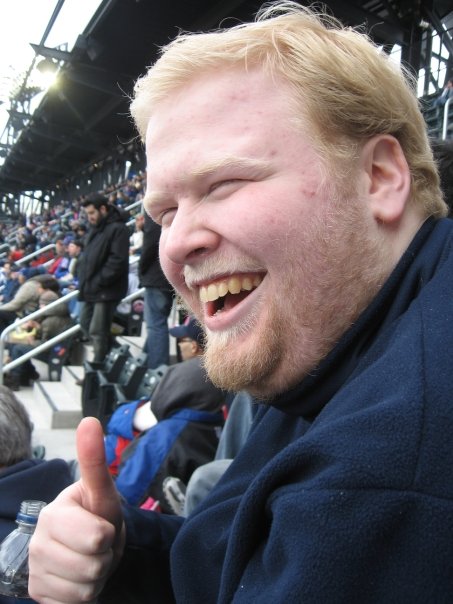 Now that we got that out of the way, I’ll tell you a little about my history. Some basic facts that have contributed to my political development.

1) My father was a Navy submariner – he trained as a nuclear technician and gradually rose through the officer ranks. He saw all of the strengths and all of the weaknesses of the Navy, and is not shy about discussing either side of that ledger (anything he’s allowed to discuss, at any rate!). So I developed a general respect for our men and women in uniform.

2) I am legally blind, and therefore faced a number of challenges in life. My mobility is limited (can’t drive), my freedom is cherished.

3) I spent most of my young adult life agnostic, but, through a long and winding philosophical journey and scholarly study of Catholic history and teachings, I returned to the faith in which I was baptized, and did so with great enthusiasm. I believe that the long history of Catholic scholarship is ideal for a scientist seeking faith.

4) I began my political life a dedicated Republican (briefly, a denizen of FreeRepublic.com, to my lasting sorrow). I even still have a couple of counter-protest shirts!

5) Since then, I’ve developed a deep skepticism of all sources of concentrated power. Big corporations, big government, big labor, big lobbies, big press, big churches. I’m a Catholic, so how can that be? Because the Catholic Church no longer exercises centralized power over anything but the faith itself. I’d have been very skeptical of a church that ruled over kings had I lived back then, and, in fact, most of the worst parts of Catholic history were directly the result of that kind of power. But Catholics figured that out on their own and dialed back the Papacy, and the authority of the Pope is now limited to matters of faith. That’s the great thing about 2000 years of scholarly work – change might come slowly, but it comes, and it always moves in a direction that is progress….without being progressive.

6) I am also a scientist and jack of many trades. My current profession is meteorology (specifically at the intersection of longer-range forecasting and seasonal and climate forecasting), which means you’ll probably get a lot of commentary from me about the state of climate “science”, since, to get a Masters in Meteorology, I attended the University that is directly tied to the 2007 Nobel Peace Prize in climate alarmism. This means I got a big whiff of the stench of dry-rot coming from climatologists who think they know anything about the weather.

All of which has left me in an awkward position. I’m socially conservative, but not in the top-down way that the GOP is except on the matter of abortion. I’m pro-liberty, first and foremost, but highly skeptical of some planks in the straight Libertarian platform. I’m a man without a party. The closest description for me would be: conservative counter-cultural populist.

I’m happy to join the Liberty Papers as a commentator and lightning rod of contention, since it seems I’m not really on anyone’s side at the moment. I variously get accused of being too libertarian by Republicans and too Republican by libertarians…it’s a boatload of fun.

I’ll be around to annoy all of you soon!

Sorry about that in advance. :)