Albert Northrup: My Own Little World 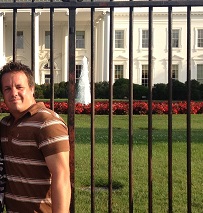 I have been wanting to blog for quite some time and I want to thank Kevin for the opportunity to post my humble opinions to The Liberty Papers.

With that being said, my name is Albert Northrup. I am 36 years old and I currently reside in Oviedo, FL, which is just north of Orlando, Florida or Flori-duh, as I like to call it. :) I hold a B.A. in Political Science and an MBA from the University of Central Florida (UCF), where I was a member of the College Republicans and Delta Tau Delta Fraternity. Side note: UCF is the second largest university in the country and we were also ranked the second best looking student body. We are a good-looking group of people. You can’t argue with facts. :) Go Knights! Charge On!  I also hold a JD from Barry University School of Law where I competed for their nationally-recognized trial advocacy team and moot court team. As a law student, I was chapter president of the Federalist Society and treasurer of the American Association for Justice.

Politically, I am a classical liberal/right libertarian. I believe that there are three functions of the government: (1) to protect against foreign invasion; (2) to promote justice and defend against injustice; and (3) to protect property rights. My love for politics began at the young age of six when my father took me to the voting booth in 1984 to vote for Ronald Reagan. I began to develop many of my own views on government during the 1994  midterm elections while I was a senior in high school. Since then, my political views have evolved from staunch conservative to libertarian (small “l”). I am still a registered Republican and I want to believe Ronald Reagan when he said that “at the very heart of conservatism is libertarianism.” However, I find it unfortunate that the GOP has been hijacked by big-government social conservatives who are just as statist as the big-government Democrats they criticize.

I am the proud father of a 17 year old boy. He is my pride and joy and an outstanding soccer player. When I’m not debating with someone on law or politics, you can find me playing soccer, running, playing poker, in the gym, or at the gun range. I am a huge fan of the U.S. Men’s National Soccer Team, the Buffalo Bills, the New York Yankees, and the UCF Knights. You can follow me on Facebook or on . I look forward to our Twitter dialogue.