Hi. I’m Elle Woods and this is Bruiser Woods. And we’re both Gemini vegetarians!

I am a 2014 graduate of Harvard College with a bachelor’s degree in Government. Although I’m sure it all began when I read “Harrison Bergeron” by Kurt Vonnegut in sixth grade, I started to develop my political ideas in earnest during my senior year of high school. They were forged in the crucible of liberal sentiment that was my college. My thinking was forcibly clarified, as I was in an environment where my ideas were opposed by a hostile majority. Classical liberals and those thereabout are in this position in American culture. However, I also learned a lot from the people I went to school with, and my mode of engagement shifted from debate to conversation. The Three Languages of Politics by Arnold Kling presents an excellent overview of the way I came to understand the ways my peers think. 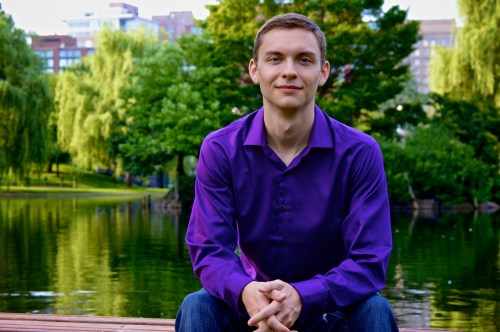 As an undergraduate I was not involved in campus social events or programs. I spent between 20-30 hours a week working for Harvard Recreation, and much more during breaks and exam weeks (no class = more work time). There are great people there, and I wouldn’t trade those hours for anything.

I identify as an Objectivist, and believe that good government is necessary for human flourishing. I think that the proper role of government is the proper role of force, because that’s what government is. So: I think a proper government should provide internal and external defense and a court system to help individuals peacefully settle disputes. When I discuss political philosophy, and philosophy widely, I don’t usually use explicitly Objectivist language (at least not immediately). I’ve found that it’s easier to speak in the language of a mutual respect for the facts of reality.

I grew up on a farm in Indiana, one of a set of triplets. I’m currently living in Boston and trying to make my way in the world. Right now I’m in the “big dreams small checking account” stage. I’ve wanted to be a writer for a long time, and this August I self-published my first novel, Climbing Olympus. It’s science fiction, which is my favorite genre. I learned a lot by writing it, and now that it’s done I’m working on several other short stories that I will develop into novels as well. I look to Gone with the Wind and Atlas Shrugged for inspiration.

In my spare time I read, write, and conversate. I enjoy history, economics, philosophy of all kinds, and vast swaths of fiction. I run, and I work on foreign languages I’ve studied over the years (Spanish, German, and Portuguese). I look forward to writing for The Liberty Papers. I think I have valuable things to contribute, and I know I’ll learn an immense amount.