TLP Roundtable — Should We Require The Labeling Of GMOs? 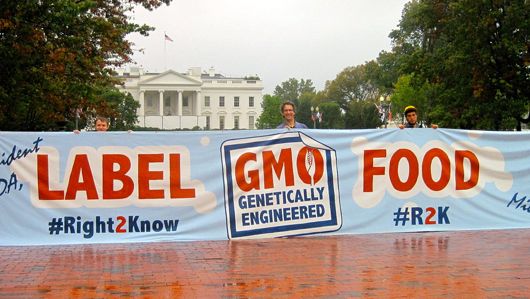 Welcome to the first of a new weekly feature here at The Liberty Papers, the TLP Roundtable where the contributors give their opinions on a topic that’s generating a lot of discussion.

This week’s topic is mandatory GMO labeling. Colorado and Oregon have ballot measures on Tuesday asking the voters of their states whether or not they believe food companies should label their GMO ingredients. Supporters of the measures believe that GMOs are harmful to the environment and humans while opponents believe that GMOs have been proven safe.

The contributors found themselves overwhelmingly against mandatory GMO labeling. One of our newest contributors, Joseph Santaniello, wrote a piece opposing Oregon’s ballot measure on this issue, Measure 92.

“I have no problem with it voluntarily but am against it as a regulatory mandate…. and I’m against it in general as a lover of science and truth; because anti-GMO hysteria is pandering to the stupid, the ignorant, the anti-science, and to those who would manipulate them for their own personal agenda and benefit”

Chris wrote a piece on this topic on his personal blog a year ago, that he wants you to read.

“While I generally approve of laws that empower consumers, and I don’t see this as creating an undue burden on businesses, I also believe that laws should actually accomplish something of benefit to society. Despite countless memes floating around social media, there’s no compelling argument that GMO foods are any less safe than non-GMO foods. With that in mind, I can’t support a law that does nothing but fuels a ridiculous hysteria.”

“Being a liberal libertarian on a site that uses the Gadsden Flag as its avatar, I’m used to pissing people off, and now it’s time for the tree huggers to get in line. There is virtually no compelling evidence that genetically modified food is even an inconvenience – let alone a threat – to people. Yes, it can be peoples’ preference to not consume any food with GMOs; that’s their right. But forcing it on other people, codifying untested science into law, and not giving me the ability to make my own educated decision is beyond the pale.

With that in mind, “let the market decide” is not necessarily the right move, either. By the time the “market” has education, there could potentially be a public health scare. Only a strict constitutionalist would argue that the government does not have the right to regulate food, if only to make sure that what we buy is indeed what we’re getting.

I have an alternative solution, and it serves as a test: instead of mandatory GMO labeling, if we really want the government that involved, let’s instead have it so that “organic” is a distinctly enforceable label, with layers of testing, peer-review and regulation before a company can put “organic” on its food. Most of the liberals I talk to want nothing to do with that for various reasons, but that just goes to show that people are generally OK with government overreach as long as it’s something they agree with.”

“Although I think the fear of GMOs is both overwrought and scientifically baseless at present – I am not wholly persuaded that GMOs are and always will be 100% safe. I don’t think the GMO label is necessary, but I think people have a right to know how their food was prepared and asking companies to provide a label is not an undue burden with any real cost (they already have to have labels…this just adds to what needs to be on the label). As such…if people want to be stupid and fearful, that’s their business…and if it turns out that GMOs become dangerous someday, we’ll be in a better position to respond.”

“If the market demand exists for information, the manufacturer will voluntarily provide it. As an example, baking soda is nowadays often marked “aluminum free.” But all baking soda has always been aluminum free. Baking powder sometimes has aluminum. Manufacturers got tired of explaining that their baking soda-along with everyone else’s-was sans aluminum, and started putting that information right there on the package. A market demand for the information arose, and manufacturers responded by voluntarily altering the packaging to provide the desired information.

If the market demand does not exist, then such a law merely amounts to forcing an expense on the manufacturer, which will be passed on to consumers who do not want or need the information. I would let the market take care of this issue entirely. Those manufacturers who wish to attract the niche market of non-GMO consumers are free to do so. The rest can field phone calls, emails or web traffic, like poor old Arm & Hammer who keeps having to explain that a product made of 100% sodium bicarbonate has no percentage points left over for aluminum.”

“I’m tempted to be against it. Considering how much my wife spends at Whole Paycheck on organics, I can only imagine our grocery bill would increase substantially if she started buying non-GMO!

But more seriously, I’m in favor of labeling, and against mandatory labeling. Mandatory labeling is only appropriate when something contains a known health risk. At this time, there is no significant evidence that GMO foods are more risky than non-GMO foods, and until/unless this changes, it should be handled by voluntary market action. There are plenty of label printing services available should one want to stick another on their product to promote it as GMO-free. In regards to other aspects of labeling, such as the best-before date and batch number, myself and others will think it is important that this has been correctly labeled so that people know exactly what they’re buying. Whether that be through the use of an inkjet coding and marking system by someone similar to Paul Leibinger, (https://www.packagingdigest.com/coding/paul-leibinger-inc), or through other methods, this type of information should always be displayed on a product’s label. It may have more advantages than we think.”

There are already voluntary non-GMO labeling schemes out there to cater to the consumers who demand non-GMO foods. If these products are not widely available, it’s not because of a conspiracy by Monsanto, but because there is a lack of demand for them. As to Chris Bowen’s point about government regulation of organics, I would argue that we already have it with the current USDA Organics program, which expressly forbid GMOs. Whether or not the program is any good or effective is certainly up for debate.”

What do you think about GMO labeling? Is it something that should be required by the government, something left to the private sector, or there’s no need for it? Let us know in the comments!