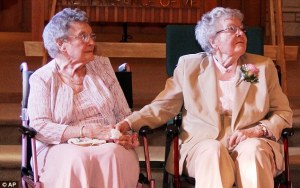 On Thursday, the U.S. Court of Appeals for the Sixth Circuit upheld gay marriage bans in Ohio, Michigan, Tennessee and Kentucky. It did so by reversing lower court rulings striking down the bans. This decision puts the Sixth Circuit out of step with the other circuit courts to address the issue thus far (the Fourth, Seventh, Ninth and Tenth). The decision is sure to be appealed, and many observers believe it will be the vehicle by which SCOTUS finally weighs in on the issue.

DeBoer v. Snyder was decided 2-1. The majority decision was authored by Judge Jeffrey S. Sutton. Sutton largely argues that the definition of marriage should not be “constitutionalized” and that change should come from the voters. He maintains that the right to marriage recognized as fundamental in prior SCOTUS cases is defined by, and presumes, a relationship between one man and one woman. He rejects sexual orientation as a suspect classification entitled to heightened scrutiny, and frets that constitutionalizing gay marriage will require recognition of plural marriages.

One starts from the premise that governments got into the business of defining marriage, and remain in the business of defining marriage, not to regulate love but to regulate sex, most especially the intended and unintended effects of male-female intercourse. Imagine a society without marriage. It does not take long to envision problems that might result from an absence of rules about how to handle the natural effects of male-female intercourse: children. May men and women follow their procreative urges wherever they take them? Who is responsible for the children that result? How many mates may an individual have? How does one decide which set of mates is responsible for which set of children? That we rarely think about these questions nowadays shows only how far we have come and how relatively stable our society is, not that States have no explanation for creating such rules in the first place.

Once one accepts a need to establish such ground rules, and most especially a need to create stable family units for the planned and unplanned creation of children, one can well appreciate why the citizenry would think that a reasonable first concern of any society is the need to regulate male-female relationships and the unique procreative possibilities of them. One way to pursue this objective is to encourage couples to enter lasting relationships through subsidies and other benefits and to discourage them from ending such relationships through these and other means.

The dissent scores powerful points observing that heterosexuals are already free to follow their procreative urges where they will, and that the unwanted children resulting from such unions suffer when their adopted same-sex parents are precluded from marrying. In any case, Sutton’s second rationale for upholding the bans has to do with principles of federalism:

[O]ne of the key insights of federalism is that it permits laboratories of experimentation—accent on the plural—allowing one State to innovate one way, another State another, and a third State to assess the trial and error over time. …. How can we say that the voters acted irrationally for sticking with the seen benefits of thousands of years of adherence to the traditional definition of marriage in the face of one year of experience with a new definition of marriage? A State still assessing how this has worked, whether in 2004 or 2014, is not showing irrationality, just a sense of stability and an interest in seeing how the new definition has worked elsewhere. Even today, the only thing anyone knows for sure about the long-term impact of redefining marriage is that they do not know. A Burkean sense of caution does not violate the Fourteenth Amendment, least of all when measured by a timeline less than a dozen years long and when assessed by a system of government designed to foster step-by-step, not sudden winner-take-all, innovations to policy problems.

Indeed, this decision creates a conflict among the circuit courts that did not exist (or at least not clearly) back in October, when SCOTUS declined to hear appeals from decisions in the Fourth, Seventh and Tenth circuits striking down similar bans.

Shortly after SCOTUS declined those appeals, the Ninth Circuit also struck down bans.

Collectively, those decisions were reached in a variety of ways: finding that the bans failed under rational basis review; applying heightened scrutiny to restriction of a fundamental right under a due process analysis; or applying heightened scrutiny under an equal protection analysis based on suspect classification or history of animus. However reached, they had the result of making gay marriage legal in 32 states (with three additional states with bans still technically in effect, which will inevitably be struck down).

That left litigation percolating in the Fifth, Sixth, Eighth, and Eleventh circuits. The decision Thursday by the Sixth was the first to break the prior pattern. Most commentators believe SCOTUS will now accept review to resolve the conflict. As Doug Mataconis, writing for Outside the Beltway, explained:

[T]he most important thing about the decisions in these cases is the fact that it creates the split among the Circuit Courts of Appeals that the Justices apparently felt was lacking when they considered the appeals it acted on in early October. … With this decision, though it can no longer be said that there is not a Circuit split since the differences between Judge Sutton’s opinion and those from the other four Circuits could not be more apparent. Thus, the one thing that didn’t exist on this issue in early October regarding this issue can now be said to clearly exist, and the likelihood that the Supreme Court will accept an appeal to this decision would seem to be quite high.

Only four justices need to agree for SCOTUS to accept an appeal. Assuming one is accepted, Mataconis and others predict SCOTUS will rule that the states cannot regulate gay marriage, by a majority consisting of at least Ginsburg, Breyer, Sotomayor, and Kagan, plus Kennedy.[1]

From my own perspective, I do not see how we avoid the leviathan of government once we accept its tentacles are properly applied to the regulation of personal relationships. Even if the collective will was acceptably used to such ends, I have not come across convincing reasons for denying same sex couples access to the same bag of government goodies, incentives and subsidies enjoyed by opposite sex couples. The various theories propounded by opponents of gay marriage are belied by the sound sociological research to the contrary. Plural marriage does not frighten me, both because it does not rise to the same level of constitutional scrutiny as gay marriage—and because it is inherently non-frightening. Finally, I have and will continue to oppose all efforts to force private people, churches or businesses to associate with gay marriages against their will. The same principles that underpin the right to choose a spouse also underpin the right to choose with whom to do business.

I will close with Justice Sutton’s own observation that: