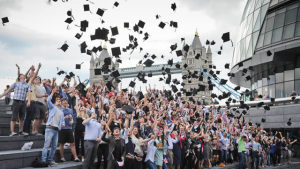 Ron Paul, Rick Perry and Herman Cain all tried appealing to conservatives in the primaries in 2012 with the simple-minded proposal that we should simply abolish entire Federal departments. There is a certain libertarian appeal toward deleting expensive and useless departments with good-sounding mandates but bad results. We get that. But the public â€“ the conservative public â€“ rejected such notions and elected the guy that wanted to streamline the government and increase state power in an attempt to make government work properly, rather than giving up on government entirely. We believe most in the middle class want to see their government achieve results, rather than gambling that the results will happen naturally without government interference. We believe the GOP must embrace the notion of governing. One way to do that, is to let the states make decisions about education policy by handing them the money and reducing the role of the Federal department to that of balance sheet management and effectiveness monitor with a mandate to make sure that state programs are producing results and striking state policies that fail. We recognize that much of the spending is already block granted to the states â€“ we are proposing to further shrink the Federal budget and return that money to the states with fewer restrictions on how it is spent.

There is a move afoot in some states to ban homeschooling â€“ we have seen the same sort of movement in the EU and elsewhere in the developed world and it has led to some frightening limitations on liberty that no one should wish to see replicated in the US. The middle class, in particular, is interested in new and innovative education solutions including massive open online courses (MOOCs) at all educational levels and a variety of other homeschooling models. Some of these models are even designed to help benefit those children who may be better suited to the one on one educational method due to learning impediments such as Non-Verbal Learning Disability (Read more here: https://littlethinkerscenter.com/parents-guide/learning-challenges/non-verbal-learning-disability/) that could impact them greatly in a traditional classroom. Instead of forcing a change for the sake of ease of management, let’s get on the right side of history and liberty before we find ourselves unable to act decisively.

It is not within the appropriate jurisdiction of the Federal legislature to mandate open school choice, in our opinion, but we can encourage the states to accept that school choice is in high demand by the lower and middle classes by increasing federal awards to states that back successful public charter, public magnet, private, parochial and homeschooling alternatives, such as the CLEP program and the clep prep supplementary material that follows, monetarily and favor successful schools over bad ones in the distribution of education budgets, and by giving states bonuses that are efficient with their education funds (generate better performance to dollar ratios).

D) Back Trade Schools, MOOCs and Private Colleges with Oversight

One of the biggest problems with the alternatives to public colleges that prevent employers from giving much value to job applicants who obtain certifications and technical degrees from private technical schools, MOOCs and trade schools is that it’s the wild west for these colleges and they are under no obligation to provide a useful and quality education. Take a note here â€“ because you will rarely see us asking for more federal regulation, but this is one such case. The Federal Government must promote alternatives to expensive public colleges to help ameliorate the growing higher education bubble and keep young people out of debt (and, in so doing, grow the future middle class). In order for us to break our addiction to student loans – click here to learn more – we must empower high school kids to choose high school and college curricula that lead to technical certifications and trades, and we can’t do that until we can guarantee that our private and technical/trade colleges meet basic standards of educational value that will convince employers to hire people certified and degreed by such institutions. The standards need not be identical to the public system, but quality assurance should be required.

Here again, it would be beyond the scope of Congress to start outlawing college degree programs that do not produce expected revenue that justifies their existence â€“ what we can do, however, is increase the available federal assistance for students who are majoring in a STEM, manufacturing, or technical field (and any other degree program with a solid history of wealth creation), decrease federal assistance for less productive or overrepresented majors, and tie interest rates to risk (a risky degree like puppetry or cultural studies should come with much higher interest rates than a STEM degree). Federal student loans should be treated like the investment they were billed to be, not like a pipeline of money that students may use and abuse to their heart’s content. Although student loans can seem like free money, it’s important to understand that the money is provided to make your university experience less stressful for you; The loans are intended to prevent you from having to worry about economic factors. However, if you find your loan doesn’t fully cover your university experience, you might want to see if you could get free money for college. Remember, college degrees should improve the US economy, not burden it.

Openness and transparency in financial outcomes and expenditures usually has the immediate impact of change the demand for products based on rational financial decision-making. College degrees are a bit more emotional than the average investment opportunity, so having good data on which degrees are good investments and which are not will not stop bad degrees from existing, but I believe it will alter the number of students falling for them (because it will cause parents to deny their children’s requests to attend expensive colleges in order to study something that has a poor earning potential, along with making some students think twice about choosing bad or, at least, over-saturated, degrees). So require the department of education to conduct a census of colleges and universities and their various degree programs and report information such as the default rate on student loans for each school, each degree program and each combination of the two, the graduation rate, the employment numbers, and the net earnings of students (per capita) by degree program at each school. If a college degree is an investment, we should know what the investment is worth.

G) Pass a Law Guaranteeing the Right of Refusal to Parents

One more thing that Congress cannot tackle directly, but must move to address in what ways it can is â€˜Common Core’. The concept of a Federally mandated curriculum is not compatible with liberty and the GOP should move to guarantee the right of all families to refuse to participate in common core and choose a different standard. This won’t help parents who are currently stuck in public schools and don’t have a viable alternative, but as GOP governors work on the problem of school choice, it will be crucial that alternative programs have the right to opt out of common core and use different teaching methods and standards.

Education is a state problem for the most part, as it should be, and in spite of efforts by leftists to nationalize and further institutionalize learning â€“ but that doesn’t mean the legislature can’t take certain steps to lead on education policy and encourage the states to be bold and innovative o their own. Middle class families are aching for a better way forward for their children ad Congress should show that this is a priority for them as well.