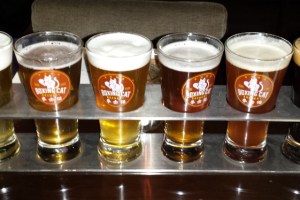 First, my apologies for last week. I was on a family vacation, and although I did sneak away to visit Figueroa Mountain’s tasting room in Los Olivos, CA, it turns out that our WiFi was spotty and I was just having too much damn fun to try to fight through that and post the review. I do have pictures and tasting notes, so perhaps I’ll get to that in a future review.

Once I returned home, I unpacked my vacation luggage, packed my work luggage, and was back out the door to the airport in a matter of hours. Many, many more hours later, I arrived in China, and so I plan to make up for last week’s lack of a review by going big. High-quality American-style craft beer in China? I heard about this, but didn’t believe it, and had to check it out. I visited the Boxing Cat Brewery in Shanghai. 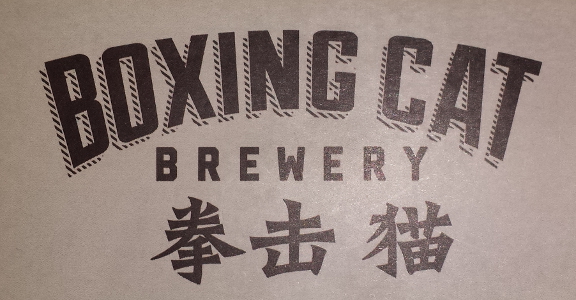 You see, China is what we typically refer to as a “beer desert.” Over here, typically you find mass-market lagers, and occasionally traditional German style beers. It can be possible to find other offerings, but quality is typically hit-or-miss as the novelty of craft beer tends to overwhelm quality when you have less-discerning palates of customers unaccustomed to craft beer. So I’ll admit that my hopes were not all that high, despite the glowing reviews I’d read online. I’ve been burned too many times by that. But, nevertheless, I’m here for a weekend without wife or kids, so I might as well give it a shot, right?

Well, as it turns out, I have been VERY pleasantly surprised by the result. Part of this starts with the key personnel and concept. If you want American beer and food, you start with an American brewer and chef. The brewer hails from the Pacific Northwest–certainly no beer desert–and the chef has comprised a menu that by concept spans “the I-10 corridor” bringing in food from the Southeast, New Orleans, Texas, the Southwest and California.

From walking in the door, you can tell that this place is aimed at visitors and expats, as the hosts and wait staff have solid English skills. While I honestly enjoy the challenge of walking into a restaurant over here and trying to communicate well enough to get a beer and a meal–it can be quite entertaining on both sides–it’s a lot more relaxing when I don’t have to do so.

When I arrived they were having a private party on their first and third floors, so sadly I didn’t get an option to see in detail or take any pictures of the bar area. I dined on the second floor, a scene which could have been taken out of any brewpub in America. Exposed brickwork, dark stained wood everywhere, visible “open” designed ceiling with exposed ductwork and beams. The lighting was a bit low, a bit lower than I’m used to in a brewpub, but not completely out of sorts. Some of the nicer brewpubs I’ve been to in the US are a little less well-lit, and this fits about in line with those. I quite honestly could have easily forgotten I was in China. It felt like a slice of home.

I ordered the beer sampler first, but I’ll get to that in a moment. Cuisine-wise, they have a menu that again could have come out of any brew pub in America. I ordered an appetizer of deep-fried mac and cheese balls. They brought me four beautiful golden-brown bread-crumb battered delights, containing gooey cheese and macaroni, served atop a deliciously seasoned ranch sauce with a side of BBQ sauce. Yes, “deep fried mac and cheese” lived up to be exactly as decadent as it sounds! I followed that up with a pulled pork sandwich full of tender well-dressed pork, a nice side salad with bleu cheese, and cole slaw. The cole slaw was a bit light on flavor, lacking either the mayonnaise base or the vinegar hit of traditional slaw styles, but overall the sandwich and salad were spot-on. Again, they don’t just “emulate” American cuisine here–they’re serving real American food.

But hey, that’s just a start. I haven’t even addressed the beer yet!

The Boxing Cat has six beers on tap, mixed between their standbys and seasonal/rotating creations. Shown here, left to right, are:

While this seems like a bit of a lighter menu, their “next up” on the board were two very strong DIPAs coming in at about 9% and 10%, respectively, so the moderate ABV choices in front of me were merely an accident of the calendar.

In general, my analysis is that the beers on this list all tasted basically exactly how they were supposed to. Again, that’s what you’d expect, right? Well, I’ve found that brewpub quality is all over the map, and many local brewpubs in “beer desert” towns in the US don’t have the attention to detail and quality control that the market enforces in highly discerning locales. I was very pleased to find that these beers were all of excellent quality. From a technical level, I found no glaring flaws or off flavors. The beers not only were fine exemplars of their style, but they were delicious.

Two of the six, however, were very unique.

First was the Rye IPA. Now, I love rye. I’ve homebrewed Rye IPA, Rye Pale Ale, Rye Blonde Ale, even Roggenbier. This beer had a much more aggressive rye note than I’m used to in the Rye IPA/Pale Ale genre in the US. Upon asking the waiter (and having the host text the head brewer), I found that the grist for this beer is 30% Rye. That certainly explained it! Now, this is not a criticism of the beer. After all, when I finished my sampler, I followed it up with a pint of the Rye IPA. But it was certainly unexpected.

Even more unexpected was the Winterweight Stout. One whiff of it, followed up with a taste to confirm, resulted in a bit of internal dialog. “Mint? Mint?! Really? Is that f*****g mint?” Now, my incredulity was a bit over the top, as it was *obviously* mint. That’s right, this is a mint chocolate stout. I’ve heard of such things from a few forward-thinking American craft breweries, but I’d never encountered one of these in the wild. It’s surprising, then, that I have to fly to China for my first mint stout. How did it taste? Absolutely freaking delicious. One of my fond memories as a child was eating Andes after-dinner mints, and this was the 6.5% ABV stout version of that. I liked it so much that I might adapt this recipe with my milk stout recipe and brew a mint chocolate milk stout when I get back home!

If I had to make one critique of the Boxing Cat, it’s that the service was not quite as attentive as I’m used to. While I highly appreciated the host going the extra mile to text the head brewer and ask the question about the Rye IPA, I will say that the wait staff was not very proactive about noticing an empty plate and sampler tray sitting in front of me. I had to flag them down to order the sandwich and another beer. However, it was a very busy Friday night, so I’ll happily let that one slide.

All in all, I was absolutely impressed by the Boxing Cat Brewery. This was a meal and a group of beers that would be home in any city in America. They even push the envelope on their beer with the heavy hand of Rye and the mint chocolate stout, and managed to hit a high level of execution on both. I’ll head out today to go try my hand again at fighting through the language barrier to find some authentic local cuisine, but I have to thank Boxing Cat for giving me a slice of America while here on the road, and for providing the local residents an accurate example of American brewpub flavor, rather than the mere inauthentic approximation I expected.

Highly recommended. In the “beer desert” that is China, this place is a positive oasis.