Ethanol not only isn’t Green… It’s Blacker than Coal

Image credit: Mother Jones (oh… and that was 7 years ago. it’s worse now)

So everyone knows the whole song and dance when it comes to clean energy, energy efficiency, renewable energy. Every now and again we get a new technology or trend on the market that changes the whole game. Such as when we changed from incandescent lights to LED neon and the likes to cut down around 70% of lighting costs. Electric cars are supposed to be one of those cleaner technologies. Energy-efficient vehicles with little to no emissions and environmental impact… right?

Their basic conclusion, is that electric cars are in fact no better, and are often worse for the environment, than conventional cars (because of their manufacturing inputs, waste outputs, and the impact of electricity generation).

Of course, anyone who has been paying attention to the actual technologies and manufacture of electric cars has known this for years… They’re essential philosophical symbols, rather than any real benefit to the environment.

… but that’s a different argument for another day…

What I find most interesting though, is the conclusions and comparisons they drew between different energy sources… particularly ethanol:

“The study finds that overall, all-electric vehicles cause 86 percent more deaths from air pollution than do cars powered by regular gasoline. But if natural gas produces the electricity? Half as many deaths as gasoline cars. Wind, water or wave energy? One-quarter. Hybrids and diesel engines are also cleaner than gas. But ethanol isn’t, with 80 percent more deaths.”

… 80 percent more damage (expressed here as deaths) than regular gasoline, just direct damage, not second order effects and the like. Nearly as much as straight coal.

When you add the damage ethanol causes from starvation, increased food costs, food insecurity, and additional transportation costs, as well as damage to vehicles and distribution infrastructure… it’s FAR worse than coal. 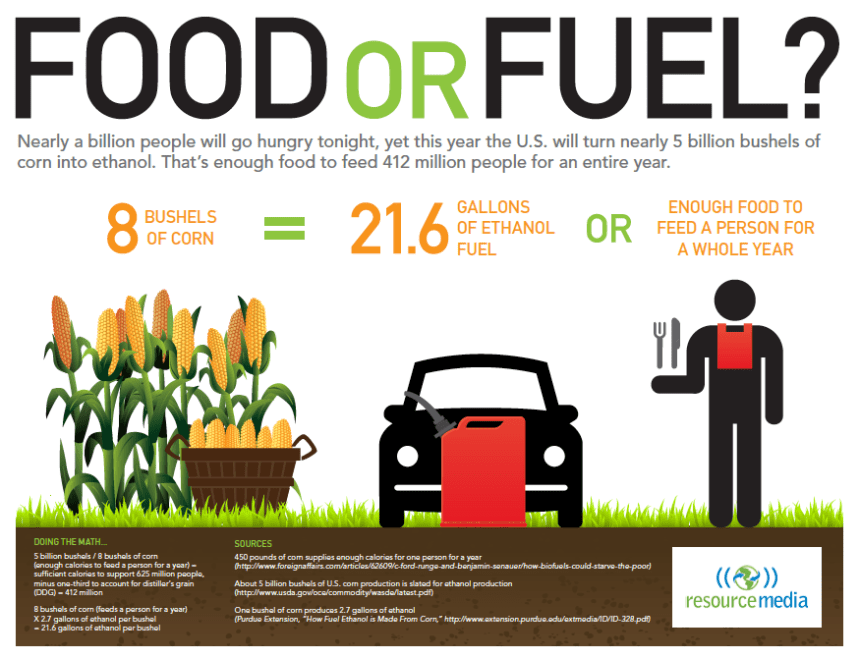 Then there’s the subsidies it soaks up and therefore the additional tax burden it creates… Ethanol is far FAR worse than coal.

Oh and then there’s the fact that ethanol is actively preventing better greener technologies from being developed; both by consuming resources which would otherwise be more productively used, as well as directly, because the ethanol industry lobbies against competing technologies, and for mandatory ethanol use.

… And of course, that’s ignoring the damage it does to our political process, dominating the early primary process, in effect acting as a filter for presidential candidate selection.

Ethanol is quite possibly the worst fuel in common use.