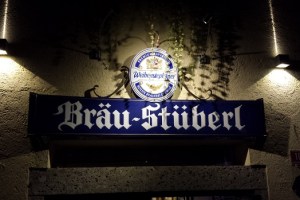 I’m not going for cutting-edge, today. That said, even though this is a beer that is about as traditional as they come–as is the brewery that created it–it’s a beer that I’ll bet most drinkers have overlooked on the shelf. Many liquor stores don’t even put this beer in the craft section; they relegate it to the “imports.”

I’m speaking, of course, of Weihenstephaner, the oldest brewery in the world. 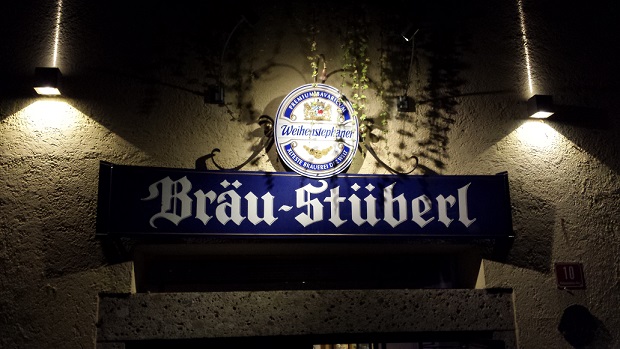 I had the good fortune to visit the brewery in Freising when overseas on business in Oct 2013**. While my schedule was compact and I could only visit for a very late dinner and beers, and couldn’t take a tour, it was very nice. Should you find yourself in Munich, Freising is very near the Munich airport and it’s easy to get to the brewery from the hotels. Making it to Weihenstephaner is a necessary pilgrimage for the devoted beer fan, and I highly recommend it if you can make it happen. 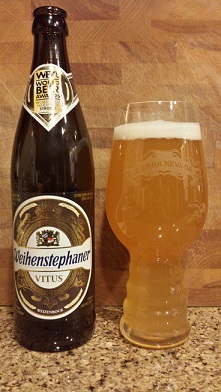 The beer of the day is the Weihenstephaner Vitus, which they describe as a weizenbock. Based on the style guidelines* and my review below, it’s a little bit questionable whether the beer fits the style. But I’m not going to hold a brewery which predates the Magna Carta to a set of style guidelines that are at most a few decades old.

I had this beer at the brewery, and enjoyed it. Yet like any normal beer fan, I came back to the US and went right back to IPAs. I haven’t bought this beer since, until I saw it and picked it up on a whim. And wow, I’m glad I did!

All in all, overlooking Weihenstephaner when you go to the beer store is a mistake. Yes, I’m a beer geek. Yes, I like seeking out the sexy new releases and actively look for the breweries who are doing something new and different. I’m certainly not going to stop doing that. But every once in a while, going back to the traditional is worth it.

One note that I will make here, before I leave you. Beer is a perishable item. Beer shipped from Germany is no exception. This advice is true of any store, but particularly true of imports. Choose a beer store with high stock turnover. Hefeweizen (like IPA) is best drank young. If you buy a bottle that’s been sitting on the shelf for 4 months, chances are it won’t live up to the review I just wrote!

* I use BJCP guidelines, which are admittedly not correct to use for a commercial brewery. The Brewers Association guidelines are more forgiving on color, and by their guidelines the Vitus is more likely to fit in weizenbock/weissbock.

** More pics from the trip available here, if you’re interested in that sort of thing.