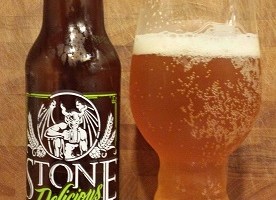 A Stone IPA? Brad’s going to follow up brewpubs in Shanghai, coffee milk stout, Gose, and beer from the oldest brewery in the world with an IPA from Stone? Hardly seems special, you wonder…

No, I wouldn’t review just any San Diego IPA. There is something special about this IPA from Stone. What makes it special? What it lacks.

Stone Delicious IPA is a gluten-reduced beer. In recent years, brewers have learned that a specific clarifying agent happens to break down gluten, to the point where any typical gluten test will show a negative result. This allows them to brew a beer using gluten-containing grains and most gluten-sensitive people can drink it with no ill effects. The way the additive works coupled with the natural lawyer-aversion of most American companies means that they won’t market this beer as “gluten-free”, but it’s about as close as you’ll get. How close? Well, they lab-test every single batch and you can check the lab results here.

In the old days (i.e. more than ~3 years ago), gluten-free beers were terrible. They brewed them with alternate grains like sorghum or rice syrup, they didn’t really taste like beer, and generally they failed in the market. Brewers today, such as Widmer’s Omission brand, are hoping to change that. 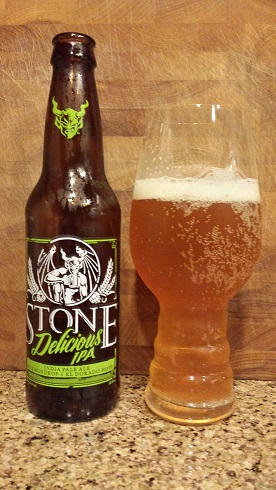 So why do I care? A few reasons.

First, I’m somewhat sensitive to the needs of the gluten-sensitive. My son is on a gluten-free diet, and while I’m not exactly going to be giving a 5-year-old any Delicious IPA, it does make me curious. In addition, I have a coworker who several years ago started getting pretty heavily into beer and homebrewing. At roughly the same time, he started having some significant health problems, and discovered that he was gluten-intolerant. He put the brewing equipment in storage, and stopped drinking beer. I haz a sad.

Second, I’m frankly curious myself. I hadn’t tried the Omission beers, but when I heard that Stone was doing a gluten-reduced IPA, I figured I should try it and review it. I drink a lot of Stone beer. I drink a lot of IPA. I know what Stone-produced IPA typically tastes like. I figured that if anyone was going to be able to determine if the gluten-reduction process made a meaningful difference to the taste or character of the beer, I could do so.

So here we go. What’s the verdict?

I say there are better IPAs out there. But are there better gluten-reduced IPAs? If I had a gluten intolerance that kept me from drinking the others, I would be VERY happy with this beer.

More importantly, I can say that this beer, for my stylistic critiques, tastes like Stone beer. If you gave this to me and didn’t tell me it was gluten-reduced, I wouldn’t be able to tell. This isn’t some sorghum-based monstrosity. This isn’t some “almost-beer”. This is beer. For people who can’t consume with gluten, to drink a beer like this isn’t missing out on a thing.