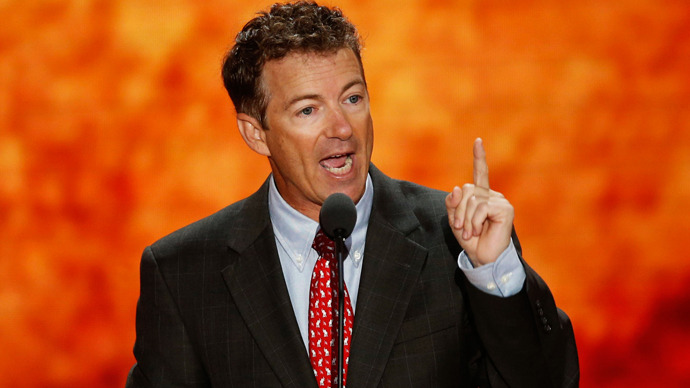 On Monday, Senator Rand Paul (R-KY), a prospect for the 2016 Presidential Election, put forth his opinion on vaccinating children. It wasn’t Dr. Paul’s finest moment.

In light of the recent measles outbreak in California, Dr. Paul was asked about the disease, and the ant-vaccination movement, on Laura Ingraham’s radio show. He stated that while he felt vaccinations were a “good idea”, he felt that parents should have the option to decline them:

“I’m not arguing vaccines are a bad idea. I think they’re a good thing, but I think the parents should have some input,” he added. “The state doesn’t own your children. Parents own the children and it is an issue of freedom.”

Dr. Paul noted to Ms. Ingraham in his interview that he believed vaccinations should be optional. In the same show, Ms. Ingraham stated that she didn’t believe measles was “that big of a deal“.

Later in the day, in a CNBC interview, Dr. Paul used anecdotal evidence to state that parents were justified in their skepticism:

“I’ve heard of many tragic cases of walking, talking normal children who wound up with profound mental disorders after vaccines,” Paul, R-Ky., said in an interview with CNBC anchor Kelly Evans.

This coincides with fellow GOP hopeful Chris Christie, who explained that while he vaccinates his children and believes they are a good thing, believes parents deserve more input:

He said that he and his wife had vaccinated their children, describing that decision as “the best expression I can give you of my opinion.” He said they believe doing so is an “important part of making sure we protect their health and the public health.”

“But,” Christie added, “I also understand that parents need to have some measure of choice in things as well. So that’s the balance that the government has to decide.”

Mr. Christie made greater input into vaccinations for parents part of his campaign for Governor of New Jersey in 2009.

Some of these public statements of support for anti-vaccination proponents can be explained as a matter of timing: earlier in the morning, an interview the Today Show did with President Obama made clear his thoughts on the matter: there are no reasons not to vaccinate:

“I understand that there are families that in some cases are concerned about the effect of vaccinations. The science is, you know, pretty indisputable. We’ve looked at this again and again. There is every reason to get vaccinated, but there aren’t reasons to not,” the president explained.

Anti-vaccination proponents – often called “anti-vaxxers” – believe that vaccinations for many diseases once viewed as eradicated can cause mental defects, with autism being the most commonly referenced, due to the amount of mercury in the vaccinations. More fringe elements of the anti-vaxxer movement believe that the government intentionally puts mercury in vaccinations as a passive form of population control.

However, most anti-vaxxers, if I’m putting this bluntly, are not very smart. They read a few articles on Infowars, see Jenny McCarthy speak for twelve seconds, put on their finest tin-foil hats, and let loose their ridiculous, half baked ideas, just before their diatribe about chemtrails. These people are clearly cuckoo for Cocoa Puffs. But what’s truly harmful is to have people like Senator Paul – a DOCTOR, for heaven’s sake! – and Governor Christie (a successful lawyer) giving oxygen to these people by enabling their nonsense.

The argument being made is that parents should have the liberty to do whatever they want with their children. However, that argument ends at my child’s body. This isn’t something like school choice, or even a voucher program that would use tax dollars in religious schools against the wishes of secular parents. Not vaccinating a child against measles puts that child’s life in danger before they even know what measles are. They also put other children at risk, particularly other children who either are not vaccinated or can’t be vaccinated due to other health concerns.

It’s one thing to argue that a parent – or even a mature minor has the right to put a child at risk if they believe the treatment is worse than the disease; I’m sympathetic to that argument to an extent. But a measles epidemic has been cut loose for the first time since “Leave It To Beaver” was being taped, and it’s affected a lot of people. Parents affected who willingly did not vaccinate their children should be held liable for the damage they have personally caused.

It’s easy to call the anti-vaxxer issue a bipartisan one – thank the “Whole Foods crowd” for that – but this is a problem that is disproportionate among hardcore, anti-government right wingers, who have been raised into a froth into believing that anything involving the government, or Barack Obama, is a bad thing. Such constant pandering – particularly by grifters like Sarah Palin and others – replaces education with nonsense because to them, these “facts” are education. Due to this, they distrust anything that goes against their worldview. “The CDC!? Liberal media fascists!” If President Obama said the sky was blue in a speech, that would be the tinder that starts a purple sky movement.

We expect “I’ve heard it causes brain damage!” to come from the wingnuts. But coming from Doctor Paul, a very intelligent man, calls into question his sincerity, his respect for the American primary voter – part of me thinks “he can’t believe that shit, can he?” – and his qualification to hold the highest office in the country.1

1 – I’m not holding Governor Christie to so strong a flame because I feel his statements, and clarifications, exhibit more nuance than those of Dr. Paul, who is no stranger to some real whoppers in his time.