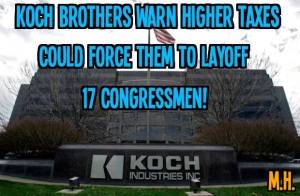 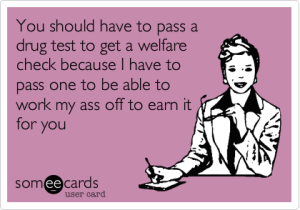 I think its very important for those of us who dislike the welfare state remember that its not just the poor who receive it. There are parasites whose entire existence is made possible only through wealth redistribution but there is more than one class of parasite. If the true reason behind drug testing is to humiliate those receiving a government check (because we now understand that it isn’t to save money) then we should ask the board members and CEOs of all the major corporations receiving corporate welfare and bailouts to stand in line to fill the cup up to the line as well.

***UPDATE***
Brad has brought to my attention a post by Scott Alexander entitled: “Drug Testing Welfare Users is a Sham, But Not for the Reasons You Think.” This serves as an excellent counterpoint to the statistics I referred to above. Scott has taken a more critical look at these numbers and it seems that the MSM has been deceptive in the reporting. Why am I surprised that the same organizations which continue to spread the gender pay gap myth by telling only part of the story would do the same thing on a story like this? Shame on me for taking the bait and spreading misinformation.

All of that said, even if drug testing every welfare recipient would be a net cost savings to the taxpayer (I’m still not convinced it is), it doesn’t seem such tests will survive the court challenges that will follow. To survive court challenges, the law has to be written in such a way that leaves loopholes large enough to drive a truck through. What we are then left with is “feel good” legislation that isn’t good for much other than red meat for political campaigns.

3. Take the Walmart Family’s Money and Give it to Students! 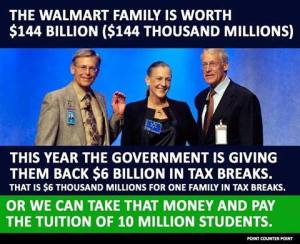 I’ve seen quite a few memes suggesting wealth redistribution or raising taxes on the evil rich but I don’t think I’ve ever seen one quite this blatant. I haven’t verified if indeed the “Walmart family” is worth $144 billion or if they will get $6 billion in tax breaks this year; I’ll leave that for others to determine because its beside the point.

So…this Walmart family has a metric crapload of money and the person who created this meme thinks we should send men with guns to their homes and take that money to give to someone else? What s/he is advocating here is armed robbery!

There’s no additional explanation of why this idea is so morally wrong. If you agree with this meme, you are an immoral person.

4. Its Not Fair that Soldiers Make Less Money than Pro Football Players 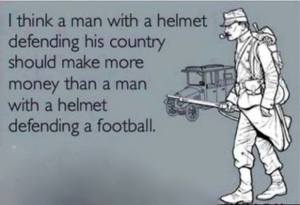 The above meme is probably the most persistent meme I come across. I probably see this one once every couple of months shared by the same people and receiving a dozen or so likes each time it’s posted. This is the sort of magical, social justice thinking I expect from progressives, not conservatives.

Yes its true, pro football players make much more than soldiers (and most of the rest of us). The thing is one has nothing at all to do with the other. The NFL makes about $10 billion annually yet it is a non-profit corporation (what?). For the purposes of this discussion, I’ll put aside my objections with subsidized stadiums and its tax exempt status (the NFL is one example of the other classes of parasites I mentioned earlier). Even if the teams were rightly required to pay for their own stadiums and the league was a for profit entity, the NFL would still make a great deal of money and have plenty to spend on players, coaches, scouts, etc.

As of the 2014 season, the salary cap for each team was $133 million. Multiply that figure by 32 teams – that works out to about $4.3 billion to pay every single player in the league. This leaves about $5.7 billion for whatever else the NFL spends money on. One should expect that with this much money coming in, the players are definitely going to think they deserve their share of the cut. Without them, there are no games and no $10 billion annually.

Interestingly, the sport that brings in the most money and does more damage to the athlete’s body pays the average player the least amount of money. So why does this meme single out pro football players?

What does this have to do with soldier pay? Again, nothing!

But why not see what the Pentagon has to work with? In FY 2013, the Pentagon had a budget of about $603 billion (more than 60 times what the NFL made that year). The average Army salaries can be found here at GoArmy.com. It does seem that the active duty soldier makes a fairly meager income. The Army does offer quite a few non-cash incentives and benefits such as housing, healthcare, and childcare among others. That’s not nothing.

If the idea is to help soldiers earn a higher salary, comparing their salary to that of professional athletes isn’t the most productive way to go about it. Instead, perhaps their salary should be compared to other government workers including members of congress. Perhaps a better meme would say something like: “I think a man wearing a helmet in the name of defending this country should make more money than the suit and tie wearing politician pretending to be tough who wants to send that soldier to defend another country.”

Maybe it needs a little work but its already an improvement. 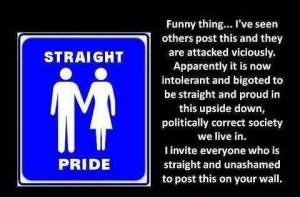 Now a number of gay people have come to the realization that they are not ashamed but are indeed proud. They do this not only for themselves but also to encourage others to get out of the closet and face the world. The more people who do, the better it is for all gay individuals.

A little tip for those who are so put off by the “homosexual agenda:” mind your own business and stop making a big deal out of people being gay. The parades and the pride movement itself will fall away after enough years have passed when someone’s sexuality is no longer considered a big deal. This may even take generations. But as long as there are people out there who are trying to make the lives of homosexuals as miserable as possible via legislation and other forms of harassment, there will be a gay pride movement complete with parades and demonstrations.

Now, I’m not “ashamed” nor necessarily “proud” of being straight…I never had to be. But I’m not being politically incorrect by not posting this to my Facebook wall.