Humans Are Pack Animals Who Pretend To Reason

Humans. We think we come up with our political positions through reasoned analysis, and then join the political party that’s aligned to our beliefs. We’re ideologically honest and consistent. We’re dispassionate referees looking at evidence and argument and making informed choices.

And we’ve always been at war with Eastasia, right? 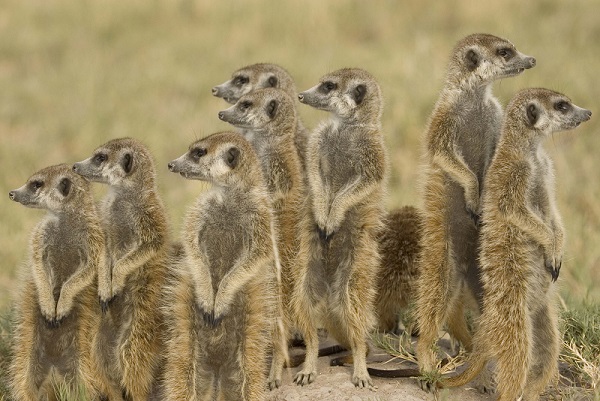 The truth is that this is all a bunch of bull. We’re pack animals. Human reason has done amazing things for us as a species, but we’re still pack animals imbued with an “us vs them” mentality, and that continually trumps the weak “reason” we rely upon.

I was struck by this by two posts I’ve read recently. The first, of course, was Kevin’s post from yesterday. It was a great post about the cultural and religious differences between the South and the rest of America. Two passages are directly relevant to what I want to discuss today:

In the first passage, he points out that seemingly disparate groups (Catholics in the South vs Protestants in the South) frequently find themselves having more in common that what should be clearly defined allegiances (Catholics, regardless of location). To me, this suggests a more fundamental principle at work–we align our beliefs to feel comfortable with those around us, not based upon objective reason.

His second passage suggests the hubris of human reason. He’s asking whether secularists “replace” religion with belief in the State, and this explains why atheists tend to fall on the left side of the spectrum.

As for that second passage, let me quote Warren @ Coyote Blog, about how political forces must align opposite to each other–highly polarized, in fact–by simple explanations of group dynamics:

So here is my theory to explain many party political positions: Consider an issue where one party is really passionate about something. The other party might tend to initially agree. But over time there is going to be pressure for the other party to take the opposite stand, whether it is consistent with some sort of party ideological framework or not. After 9/11, the Republicans staked out a position that they thought that Islam as practiced in several countries was evil and dangerous and in some cases needed to be subdued by force of arms. In my framework, this pushed Democrats into becoming defenders of modern Islam, even at the same time that domestic politics was pushing them to be critical of Christian religion as it affected social policy (i.e. abortion and later gay marriage). Apparently, the more obvious position of “yeah, we agree much of the Islamic world is illiberal and violent, but we don’t think we can or should fix it by arms” is too subtle a position to win elections. I fear we have gotten to a point where if either party is for something, they have to be in favor of mandating it, and if they are against something, they have to be in favor of using the full force of government to purge it from this Earth. And the other party will default to the opposite position.

Expecting most partisans to be ideologically consistent is expecting pack mentality to be trumped by reason. The fact that it rarely is suggests that being a member of a pack is such as strong emotional evolutionary drive that people will reason themselves into other positions rather than fight the orthodoxy. 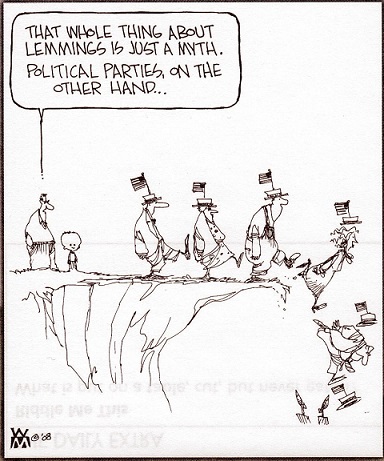 You see this consistently in politics. When Bush was in power, Republicans dismissed concern over warrantless wiretaps as the ravings of civil libertarians who were more worries about the feelings of terrorists than the safety of our nation. Put Obama in the White House, and suddenly it’s government spying on our most treasured private secrets! When Bush was in power, the anti-war left was in the streets, demonstrating about our illegal war. Put Obama in the White House, and the left goes silent while suddenly the right slams Obama for his actions on Libya.

In these cases, we’re more worried about solidarity with our pack than adherence to ideological consistency. Now, that’s not everyone. There are outliers. There are still hawks on the right that want Obama going into the Middle East guns a-blazin’. There are still those on the left more willing to cheer Edward Snowden than Obama on government intelligence. But it’s amazing how quiet those folks are today.

Most people, however, are blind to this inconsistency. They find rationalizations to change their position to become consistent with the position of their pack. They smooth out outlying positions by segmenting themselves into one part of their political party (i.e. they’re a Conservative, not a Republican, or they’re an Environmental Democrat, not a class warrior). But over time, it’s amazing how closely their beliefs tend to mirror those of their party.

So, back to Kevin’s question: do secularists replace religion with the State?

I think they do, but not consciously. Going back to Coyote’s point about people defining themselves in opposition, what you’ve seen in the Republican party is that Republicans have become “the party of the religious conservatives”. Secularists look at that party and say to themselves, “I am not like them. I am not a member of that pack.” They seek out alternative packs. For some, who are much more stridently in favor of small government, they end up in the libertarian camp. For most, though, they end up falling in with Democrats. Democrats seem so much more like themselves.

Why are Democrats the secular party, despite the fact that they’re overwhelmingly Christian just like the Republicans? Well, as Coyote states, when the other party tries to own religion, you take the opposite position. Republicans are loudly the party of the “traditional Christian values”. Democrats may still be Christian, but they don’t wear religion on their sleeve quite so heavily.

So those who are turned off by religion jump in with the Democrats. From there, the cognitive dissonance of identifying with leftists on religious grounds works its magic until they slowly start coming around on other issues. They start seeing Republicans as not as compassionate as their new comrades. They start believing that because their new friends view “compassion” as being in favor of government redistribution of wealth, they start to believe in redistribution. In short, they start aligning with the people who surround them and actively distancing themselves from those against them. To quote Kevin, those leftist values have “rubbed off on them”.

The same thing happens the other direction. After 9/11, there was a serious rift in the Democratic party between those who were more security-oriented and those who weren’t. Republicans already owned the “strong national defense” brand, and many Democrats started to break with their old party on that front. What happened? You end up with people like Dennis Miller, who was a leftist prior to 9/11, ended up on right wing talk radio. Was he always a conservative in disguise? No. But the issue of high importance to him [fighting terrorists] caused him to change pack, and he couldn’t handle the cognitive dissonance of not accepting the pack’s other beliefs as well. Christopher Hitchens is another good example. He broke with the Democrats over Islam, and over time started finding himself more and more in agreement with Republicans on other matters. Cognitive dissonance is a powerful thing.

Even libertarians are not immune. We like to believe we’re free-thinkers, and we certainly consider the circular firing squad to be our favorite pastime. But the libertarian purity tests have the aggregate effect that we end up defining ourselves as far to the extreme as possible to distance ourselves from “the Coke/Pepsi parties”. As a result, people end up describing themselves as “small-l libertarians” or “libertarian-leaning Republicans” because we’ve defined our brand to be so extreme that many are not willing to associate with our pack. I was once told–by Eric, the founder of The Liberty Papers, no less–that I seemed “too normal” for libertarianism.

Going back to Kevin’s points about religion, this is also the case with atheism. So many people who don’t believe in god call themselves agnostics or “spiritual”. Atheism as a brand has a reputation defining itself as anti-religious, and that brand’s reputation is heavy on defiance, non-conformity, and anger. People are scared of that brand, don’t see themselves as part of that pack, so they shy away from the label entirely. Niches, whether political or religious, tend to become insular and more extreme as they define themselves opposite moderation.

So, what’s the takeaway? Well, it’s first and foremost to recognize who and what we are. You can’t solve a problem unless you identify that it’s a problem at all. Pack mentality is one of the key attributes of confirmation bias. It’s one of the key reasons we engage in appeal to motive in arguments–we fundamentally see “them” as being motivated by everything that’s evil and wrong with the world while excusing our side as well-meaning even when wrong. And when we follow Reagan’s Eleventh Commandment, we are explicitly allowing pack allegiance to trump ideological consistency. We value “our side” winning more than we value the truth.

We have natural tendencies towards pack mentality. This is part of our evolutionary biology. But it’s dangerous, and doesn’t have any place in the modern, multicultural, globally interconnected world in which we live today. We need to recognize it and guard against it. Because when you actually sit down and break bread with the people who seem so different to you, you find out that we’re really not as different as we seem. We need to come around to a world that’s not “us vs them”, because when it really comes down to it, it’s all just “us”.