Sorry To Disappoint, But Getting Government Out Of Marriage Is A Fantasy 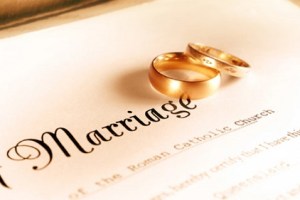 In the wake of the Supreme Court’s decision making gay marriage legal in all 50 states, the rally cry of many libertarians and conservatives is to get government out of marriage. Presidential candidate and Kentucky Senator Rand Paul wrote an op-ed suggesting just that. While that’s a tempting proposition, it’s probably not possible without a major overhaul of everything from government benefits to nearly the entire civil and family legal code.

Let’s start on the Federal level. The Christian Science Monitor had an article that describes all the various benefits and rights that are granted as a result of marital status.

The sheer volume of benefits offered to married Americans may make it difficult for the United States to disentangle itself from the “marriage business.” In the US, there are 1,138 benefits, rights and protections granted under legal marital status, based on federal law, according to the Human Rights Campaign. Benefits of marriage extend to areas of Social Security, tax law, immigration, employee benefits for federal workers, and health coverage to name a few.

Unless we repeal or modify every single one of these programs and rights, simply eliminating marriage will create new legal nightmares.

Jason Kuznicki of the Cato Institute found that while decoupling the Federal tax code from marriage is a good idea, there are many aspects of marriage related law that serve a valuable function in a free society. Among those are:

When you look at the state and local level, the argument for “getting government out of marriage” falls apart even more. Here are just some of the other benefits and rights that marriage provides:

To get “government out of marriage” is a fantasy because it takes away an efficient way to handle civil and family matters. However, there is an alternative that libertarians and conservatives can support, which is a separation of civil and religious marriage. All references to “marriage” in the law can and should be replaced with “civil marriage.”

For legal purposes, only a civil marriage is required to access the spousal benefits and rights. That is granted by a marriage license issued by state governments and all that is simply signing a piece of paper and having it signed off on. All the state is doing is recording the marriage. It is not passing judgment on the wisdom of the ceremony. If they want an actual ceremony, they can pay more money for one.

Since it is impossible to “get government out of marriage”, libertarians and conservatives should concentrate on separating civil marriage from religious marriage.