Should Libertarians Worry About Political Refugees Seeking Asylum in the LP? 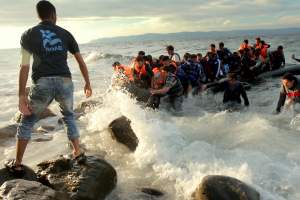 With the primary phase of the 2016 campaign coming to an end, there’s little doubt that many rank and file Republicans and Democrats are not very pleased with their party’s presumptive nominee. For Republicans who actually care about principle, Donald Trump is a non-starter. Many if not most will ultimately decide to vote for him anyway because of the idea that Donald Trump is the lesser evil when compared to Hillary Clinton. Other primary voters who were serious when they said #NeverTrump meant it before May 3rd and mean it now after May 3rd. They have reached the conclusion that Hillary is actually the lesser evil when compared to Trump or at best see them as equally evil.

What are the anti-Trump Republicans to do? Join a third party? Register as independent?

Die hard supporters of Bernie Sanders find themselves in a similar situation. While I haven’t followed the Democrat race for the White House as closely, there does seem to be some angst about Hillary Clinton. Will they decide that from their point-of-view that Hillary is the lesser evil compared to Trump? I’m thinking most will but at least a fraction of the Bernie Sanders voters will make a different choice.

What are pro-Sanders, anti-Hillary Democrats to do? Join a third party? Register as independent?

Less than a month ago, a press release was posted on the Libertarian Party home page inviting political refugees from the Republican and Democrat parties to join the LP. Here’s an excerpt:

We welcome former Republicans and Democrats who value “liberty and justice for all” to find a new home in the Libertarian Party.

Libertarianism is the idea that you should be free to make your own decisions in all aspects of your life as long as you don’t infringe upon the rights of others.

I find the idea of a flood of political asylum seekers coming to the LP both exciting and terrifying.

If the LP were a nation, it would be a small nation of immigrants. Sure, there are indigenous Libertarians but they are surely the minority. Most Americans grew up in Republican and Democrat households – to the extent Americans are politically active at all. Most Libertarians came to either the party or the philosophy over time and after realizing the party they thought represented them didn’t. I too am a political refugee. The leading candidate for the LP presidential nomination and 2012 nominee, Gary Johnson was a refugee and he’s hardly the first.

The real question is, what do these refugees want?

If they simply want a temporary visa and support the LP nominee for president, even if simply as a “protest vote” most native Libertarians would welcome and encourage that. For those who want citizenship, more would be expected.

What specifically am I talking about? Allow me to address any would-be asylum seekers:

Chris Byrne explains this in some detail in his post that there’s more to libertarians than conservatives who want to legalize pot. If everything you have learned about libertarian philosophy comes from Salon, Slate,The Young Turks or other left wing outlets (and some right wing outlets as well) which deliberately misrepresent what libertarians stand for…you need to forget all of that. Familiarize yourself with actual libertarian institutions/projects such as The CATO Institute, The Reason Foundation, The Mises Institute, The Ron Paul Institute for Peace and Prosperity, The Free State Project, The Tenth Amendment Center, The Institute for Justice and of course the Libertarian Party (especially the party platform). I should point out that among these groups, there are disagreements.

Some of these groups don’t even like each other. Its also quite possible that some of my fellow Liberty Papers contributors might object to listing some of these groups and/or failing to mention another. The point is there is a great deal of philosophical diversity within the broader libertarian movement and, therefore; cannot be pigeonholed into the caricature of libertarians Salon wants you to believe. One thing libertarians of all stripes believe (whether its called the Non Aggression Principle or something else is a debate in and of itself) are the individual rights of life, liberty, and property. Explained another way: Don’t hurt people and don’t take their stuff. 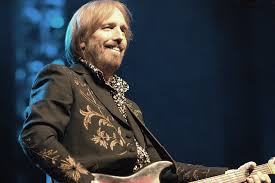 As Tom Petty likes to say, you don’t have to live like a refugee.

Refugees who actually value the individual rights as described above – having them join the LP would be a great help. For those who want to come in yet hold on to the customs of the party they just left, they need to find asylum elsewhere.

Pivoting back to the original question, should libertarians worry about a bunch of posers coming in and transforming the LP into another Republican Party?*

I believe this would only be a problem if the LP actually started achieving significant electoral success. The reason the LP has been able to stay true (for the most part) to its founding principles since 1971 is because LP candidates haven’t been elected and, therefore; haven’t had to govern. For 45 years, voting/running for the LP has meant never having to say you’re sorry. “Don’t blame me, I voted Libertarian!” Once Libertarians are elected, then we find out how principled they really are.

Until that time comes, I’m very confident that libertarians will expose the frauds. In the LP and/or the greater liberty movement there’s no such thing as “The 11th Commandment.” If you have called yourself a libertarian and another person who calls himself/herself libertarian hasn’t questioned your street cred, you haven’t been a libertarian very long. The intramural battles between Team Cruz and Team Trump or Team Sanders and Team Hillary are mere child’s play by comparison.

In the final analysis, its my belief that the LP will continue to be the LP as we know it only larger. The refugees who want to bring Sharia Law** to the party platform will lose patience dealing with people who actually have principles and self deport. 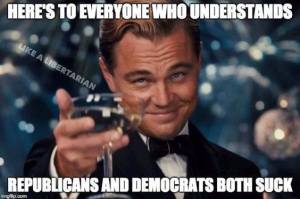 *I don’t think the number of disgruntled Sanders refugees will amount to a large enough bloc to alter the direction of the LP.