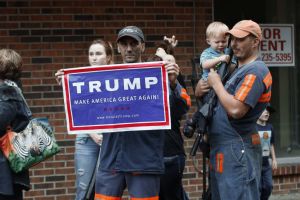 This is the tl;dr version of my contribution to the TLP Round Table on Donald Trump’s rise to the status of presumptive Republican nominee.

Various motivations for Trump’s popularity have been posited over the course of the election cycle. Tribalism and xenophobia. Social order authoritarianism. Anger at the establishment. Anti-PC backlash. A yen for creative destruction.

I even have some sympathy for that last one. What is the point of preserving a GOP that has failed so resoundingly to deliver on the promise of limited government? Why not blow on the tiny orange flame of a Trump-match and see if it catches fire? Some wildfires make the ecosystem stronger.

But that is not my point here. There is another faction of Trump support, which has been overlooked amid all the self-righteous indictment of his surprising success. That faction consists of working class voters who spend their lives on the financial brink, who could not come up with $400 to face an emergency, but who, as a result of the statist, two-party-dominated system, cannot escape the inevitability of big government.

We advocates of free markets too often fail to explain, cogently, why free trade and voluntary exchanges deliver the best outcomes for the most people. We fail to explain why it is not just big corporations, businesses and entrepreneurs that get hurt by government interventions into the free market—but also the workers. And when those workers complain about the various ways in which they struggle to make ends meet, we too often dismiss it as a deficiency of effort, rather than a legitimate complaint against the system.

This makes no sense. We know better. We know that over-regulation, barriers to entry, excessive government spending, crony capitalism, and welfare for the rich are all bad for the economy and particularly bad for workers. We know these policies cause work to be less remunerative and hit poor people the hardest.

Why then, when they complain, do so many of us respond by dismissing them as lazy, unmotivated, unproductive and entitled? We should be capitalizing on their complaints. They are incontrovertibly legitimate.

The Mercatus Center at George Mason University recently published a study estimating that regulatory drag has stunted the size of the U.S. economy and made Americans significantly poorer than they would otherwise be. Their numbers, while shocking, seem woefully inadequate to reflect the true costs working people pay for intrusive government.

Through “subsidies,” regulations and entitlements, government intervention into the market drives up prices-relative-to-incomes on most of the things consumers need most. Housing, education, and healthcare all far outpace inflation. Meanwhile, government consumes 36% of GDP, and on everything from contact lenses to gasoline to occupational licensing, Americans must pay more while struggling to participate in a system that is rigged against their efforts.

It is simply not possible to sell people on the wealth potential of a free market while castigating them for failing to succeed in a system that requires hundreds of hours and thousands of dollars to get the mandatory license for a job washing hair.

In that regard, the Democrats have a point (incomplete and poorly made, to be sure) when they say, “you didn’t build that” or, “you’ve also been lucky.” Would-be business owners pay their extorted dues to the government-backed bureaucracy. In return, they are protected from competition by various barriers to entry, government-enforced monopolies, tax-payer funded subsidies, and other massive transfers of wealth from taxpayers to the favored recipients of government largesse. It makes a certain twisted sense to demand more compensation in proportion to their success. 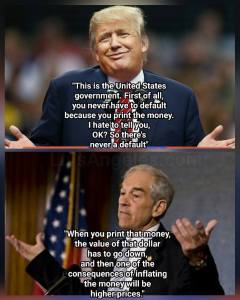 One of these men understands how money and economies function. He led a grassroots movement that motivated millions of young voters. In response, the GOP changed its rules to keep him from gaining traction. The other one is the new face of the Republican Party.

Don’t like it? Great. I don’t either. Let’s repeal the barriers to entry, the legal monopolies, the government grants and below-market loans. Let’s get rid of the regulations and the occupational licensing, the mandated dues and the bureaucratic red tape and all the other bullshit.

This is, in fact, what we put Republicans in the House and Senate to do.

Yet over and over and over again, with a few principled exceptions (e.g., Rand Paul, Justin Amash, Thomas Massie, and, yes, Ted Cruz), Republicans have broken their word, expanded government, and asked us to be patient while they focus on getting reelected.

Revealing the true direction of their priorities, the GOP establishment acted to keep Ron Paul supporters from gaining traction in their ranks. The liberty movement has not died as a result, but it may have left the party. Inside the GOP, it has been replaced by an orange-faced baboon leading an army of alt-righters shouting “cuck” repetitively as they rock back and forth in fear of outside stimulation.

I will not deny a certain satisfying schadenfreude at that turn of events. And there is value in knowing such a cancer festers on the right. But there is equal value in understanding that Trump would not be succeeding on their support alone. He is also propelled by a significant faction of working-class voters desperate for better jobs, a stronger economy, and higher purchasing power. 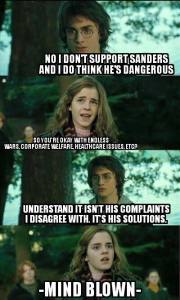 Sanders supporters may be an untapped area of future liberty votes.

In that regard, Trump’s message resonates with voters on the right for some of the same reasons Bernie Sanders’ message resonates on the left. If big government, high taxes, and crony capitalism are inevitable – because neither of the viable parties intends to do much about them – why not use one’s vote to fight for a bigger piece of the stunted pie? Trump at least pays lip service to the struggle. He promises jobs and protectionism, a reprieve from debt and stagnation.

Of course I know he will not deliver. Trump’s “solutions” will further hurt working class people, by driving up prices and contracting the size of the economy.

Trump is Sanders in orange-face.

The point is, if a liberty-movement aims to rise from the ashes of the Trump-fire, it must speak to the struggles motivating voter support for these two surprise candidates. It must explain why no amount of further tinkering will alleviate the real pain that government intrusions into the economy cause to real people, why the only solution is to unwind those intrusions in the first instance.

Then it needs to actually deliver.