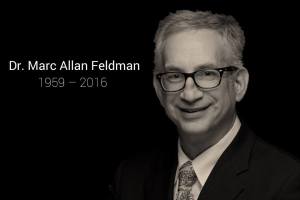 2016 candidate for the Libertarian Party’s nomination for president and newly re-elected at-large member of the Libertarian National Committee passed away on Tuesday. The cause of death is not known at the time of this writing.

“Members of the Libertarian Party are deeply saddened to learn of Dr. Feldman’s passing. He grew up cynical about politics and politicians, but found in the Libertarian Party a politics of empowering individuals that he could believe in. We will miss his dedication as? a member of the national committee and candidate for public office,? but most of all, I will miss a good friend. He was a delightful,? spirited, and dedicated Libertarian who inspired and won the hearts of? many. Our deepest condolences to his family on their loss.”

Fellow presidential candidates, with whom he shared the debate stage at numerous Libertarian conventions, expressed their condolences.

Libertarian presidential nominee Gov. Gary Johnson said, “I am saddened to hear of the loss of Marc Feldman. He was a true champion of liberty and a friend to many of us. His humor and wit will be missed.”

“I got to know Marc over the last seven months in the campaign trail,” said radio host Darryl Perry. “We became friends and I respected his opinions. I send my condolences to his family and other friends. Shalom.”

“I’m very sorry to hear that Dr. Marc Feldman passed away,” said Libertarian Republic founder Austin Petersen. “He was a good man. He was very entertaining. He could have been a fantastic host of a Libertarian television show.”

To be honest, I don’t know who many of the players are within the Libertarian Party. Marc Feldman is not really a name that rings a bell. But then I saw his picture and I wondered: “Wait, is he that libertarian?” (Dr. Feldman has ‘one of those faces’ you remember).

The libertarian that gave that speech at the 2016 National Libertarian Party Convention before the delegates began voting for their party’s nominee?

I’m sad to report that yes, that libertarian is no longer with us.

Here is that speech:

That speech puts a smile on my face whenever I hear it. There’s something about that speech that makes me want to do a fist pump because we’ve all been that libertarian at one time or another (it seems Austin Petersen felt the same way).

Thank you Dr. Feldman for your efforts to make the world a freer place. Rest in Peace.