If Trump Is a Pig, Does It Matter If Bill Clinton Is Also a Pig? 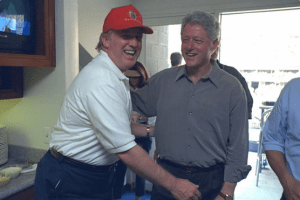 Bill Clinton admitted having extra-marital sexual relationships. One of them was with a much younger intern who was, for all intents and purposes, his employee. The relationship with Monica Lewinsky was icky and troubling due to the assumed power differential between the two parties – but there was nothing illegal about it.

Bill Clinton was accused of raping and sexually assaulting other women. No jury has found him guilty and he is therefore presumed innocent. Some people who feel strongly about due process for other men accused of crimes they deny committing, do not seem to grant the same benefit of the doubt to Bill Clinton.

Donald Trump has also been accused of raping and sexually assaulting women, including a 13-year-old girl. He has never been convicted by a jury and is therefore presumed innocent. Yet, again, some people who feel strongly about due process for other men accused of crimes they deny committing, do not grant the same benefit of the doubt to Donald Trump.

Cue the moral relativism. Nothing is good or bad except in relation to something else. No time should be wasted discussing one thing if there is something more egregious available to be discussed.

But Bill Clinton!!! Why aren’t we talking about Bill Cliiiintonnn?!

Go ahead and talk about it! No one is stopping you. We’ve been talking about the allegations against Bill Clinton for decades. Talk about them some more if it floats your boat. I know it’s a novel concept, but we can actually talk about more than one thing at a time. And, now bear with me here because I know this one is hard, but they can both be bad.

If we never talked about anything except the absolute worst, most seriously bad thing in the universe, we would only ever talk about war, cancer and entropy.

Oh, Bill Clinton and Donald Trump might be sexual predators who should not be allowed anywhere near public office…but what about serial killers, hmmm? They actually kill people, why aren’t you denouncing them?

What about the fact that the Earth might get hit by an asteroid any moment and we would all cease to exist and you’re just distracting from the real issues by talking about who should be President? Of a country that’s only existed for, like, a couple hundred years? Weighed against the fate of the planet that has existed for more than four billion?

But while all the partisans enlightened people who know what really matters are discussing the truly important things – like rehashing decades old unproven allegations against a man who is not running for office – let me clarify a couple of things.

First, Bill Clinton was never convicted. He denies the allegations. Donald Trump was accused by his own words. People can decide for themselves if that’s a distinction that matters, but it does exist.

Second, the problem is not that Trump said a bad word or spoke vulgarly or objectified women, as some like Sean Hannity have suggested – attempting to contrast that with Bill Clinton’s (alleged) conduct. Trump’s “words” described “actions” he claims he engaged in. As Robby Soave writes at Reason: “Grabbing an unsuspecting and unwilling person’s genitals is a criminal act of sexual assault under any definition of sexual assault.” I do not find Trump’s phrasing to be as definitive as Soave. But at a minimum, it suggests encounters that are deeply ambiguous on the issue of consent.

People can decide for themselves how important that is to his fitness for office. Don’t expect everyone else to ignore it.