Yesterday the Nobel Prize Committee insulted the Great Helmsman, President Barack Obama by awarding yet another prize to an unworthy second rater while ignoring the Great Helmsman’s dramatic contributions in every field.  Our dear leader wrote the two greatest books in modern civilization. These books are an inspiration to all of us who are his children. Yet the award was given to some woman who is practically unheard of, who touched no more than a few million people tangentially. How can our dear leader be ignored so?

The prize for Chemistry was awarded to some scientists who worked on questions regarding how ribosomes interact with DNA. Worthy work, yes, but was not the work of the American scientist not guided by our dear leader, his work funded by the Federal Government? How can they ignore the work on many fields that is being inspired by the magnificent all-encompassing vision of our dear leader as he directs the human race towards ever greater heights of prosperity and scientific achievements?

Similarly the prize in Physics honors people for a improving the use of semiconductors in fiber-optic design. Yet were not grants from the U.S. Federal Government used to fund this research? Did not the enlightened guiding hand of the father of the people not show them the way, not just in this area but in all the areas pf research into physics? Thousands of lifetimes’ worth of research is conducted by people following the guidance of the great Helmsman, yet he receives no credit? Do we award the plank of wood for the actions it carries out when directed by a man at the rudder?

The prize for medicine ignores the millions who will have their lives saved when our Great Helmsman reveals his plan to reform our medical industry to ensure maximum care for all with great justice.

How many millions more will owe their lives to our president than to the work of these few doctors?

Our leader deserves all the prizes; the economics prize for keeping unemployment below 8.4%; the mathematics prize for improving accounting theory to minimize budget deficits; the peace prize for his efforts to make the world a more peaceful place by increasing the vigor with which Afghanistan, Iraq and Pakistan are pacified, and his offers to pacify Iran as well.

It is time that the Nobel Prize Committee recognized that our Dear Leader is guiding our great nation to produce numerous scientific, technical and social innovations that improve the lives of not just the happy people living in America but throughout the world.  Anything less is an insult to the tireless efforts of our leader that benefit humanity.

Update:  As this was going to press, the Nobel Prize Committee announced that the peace prize had been given to our dear leader.  While I praise them for finally coming to their senses on this one matter, I warn them that it is not sufficient.  Again, if one looks at all the fields covered by the various prizes,our leader’s contributions are far in advance of those made by anyone else.  Only the transfer of the other prizes to our dear leader from the people they mistakenly gave them to will appropriately and justly remediate the situation.

Continuing his George Costanzaesque presidency, Obama has decided to reappoint Ben “Helicopter” Bernanke to another term on the Fed.

Here’s what Obama had to say:

Ben approached a financial system on the verge of collapse with calm and wisdom; with bold action and outside-the-box thinking that has helped put the brakes on our economic freefall

I thought it might be useful to take a look at some highlights of this Solon, this central – planner whom George Bush put in charge of the money supply:

Of course, as usual, Obama is dead wrong: the Federal Reserve’s actions have actually prolonged the downturn, made it worse, and have laid the foundations for an even bigger crash down the road. 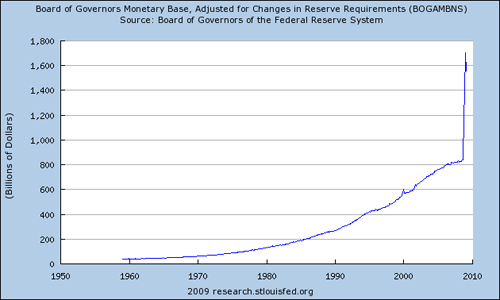 In the days before the election, I told many of my fellow Massachusetts residents that Obama was not so much a break from George Bush as a continuation of his worst policies. I am sorry to say that he has been proving me right since. And this is yet another nail in the coffin of an administration that is showing itself to be even more incompetent than the Bush presidency.

The Battle Between the Right to Medical Care vs. Government ‘Medicine’

For decades the cost of medical care has risen relative to prices in general and relative to people’s incomes. Today [1994] a semi-private hospital room typically costs $1,000 to $1,500 per day, exclusive of all medical procedures, such as X-rays, surgery, or even a visit by one’s physician. Basic room charges of $500 per day or more are routinely tripled just by the inclusion of normal hospital pharmacy and supplies charges (the cost of a Tylenol tablet can be as much as $20). And typically the cost of the various medical procedures is commensurate. In such conditions, people who are not exceptionally wealthy, who lack extensive medical insurance, or who fear losing the insurance they do have if they become unemployed, must dread the financial consequences of any serious illness almost as much as the illness itself. At the same time, no end to the rise in medical costs is in sight. Thus it is no wonder that a great clamor has arisen in favor of reform – radical reform – that will put an end to a situation that bears the earmarks of financial lunacy.

Given the current debate, it’s a good essay to reread, and the folks at the Mises Institute have obliged by posting it on their fine website.

Reisman argues against many of propositions that are assumed to be true by proponents of govenrment medicine, economic ideas that are based on primitive emotions and have no basis in actual economics: END_OF_DOCUMENT_TOKEN_TO_BE_REPLACED

Over at the Agitator, Radley Balko asks why people are amused by Bob Dylan’s latest run-in with the law.

I find it pretty depressing. There was a time when we condescendingly used the term “your papers, please” to distinguish ourselves from Eastern Block countries and other authoritarian states. Post-Hiibel, America has become a place where a harmless, 68-year-old man out on a stroll can be stopped, interrogated, detained, and forced to produce proof of identification to state authorities, despite having committed no crime.

Maybe what makes it comical rather than a tragedy is that it happened to a famous guy rather than some ordinary person.

I’ll Support Your Boycott If You Support Mine

Yet another great letter by Don Boudreaux:

You and many readers of Daily Kos are furious that Whole Foods CEO John Mackey expressed – in the pages of the Wall Street Journal – his opposition to greater government involvement in health care.

Exercising your rights and abilities as consumers, you are therefore boycotting Whole Foods.  You’re using your freedom to avoid paying for products offered by someone whose attitude toward government you disapprove of.
Isn’t freedom wonderful?!

But I must ask: do you endorse my freedom to boycott paying for products offered by those whose attitude toward government I disapprove of?  Like you, I have very strong opinions about the proper role of government, and also as in your case, a famous chief executive is now endorsing government policies that I find reprehensible.

Will you champion my freedom to stop supporting, with my money, President Barack Obama’s services?  Will you come to my defense if I stop paying taxes to support those policies of Mr. Obama with which I disagree – policies such as the economic ’stimulus,’ more vigorous antitrust regulation, and cap and trade?  Indeed, will you defend me if I boycott – if I choose not to pay taxes to support – Obamacare?

If you will support me in my boycott, then I applaud your principle and, although I disagree with you about Mr. Mackey’s political views, fully support your freedom to boycott Whole Foods.  But if you will not support me in my boycott, then can you tell me on what principle you would stand to defend your right to boycott supermarkets if someone (say, Mr. Mackey) managed to secure legislation that obliges you to shop at Whole Foods?

I await your reply.

I couldn’t put it better myself. One quibble, even if Olivia Jane was not willing to extend us the same courtesy and support our desire to boycott Obamacare, we should applaud her principle. Just because she has reprehensible political views does not mean we should ignore the opportunity to teach her the value of a right to exit/disassociate.

tarran
I am an anarcho-capitalist living just west of Boston Massachussetts. I am married, have two children, and am trying to start my own computer consulting company.
http://www.thelibertypapers.org/author/tarran/
« 1 … 3 4 5 6 7 … 26 »