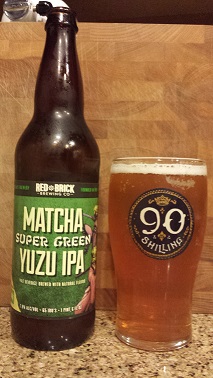 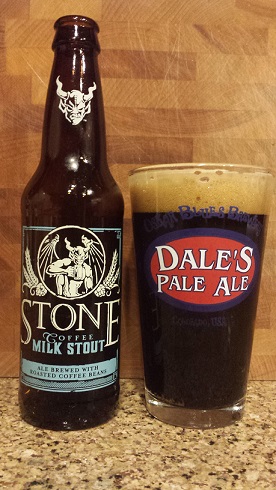 All that said, I highly recommend you buy this beer. It truly is delicious.
END_OF_DOCUMENT_TOKEN_TO_BE_REPLACED 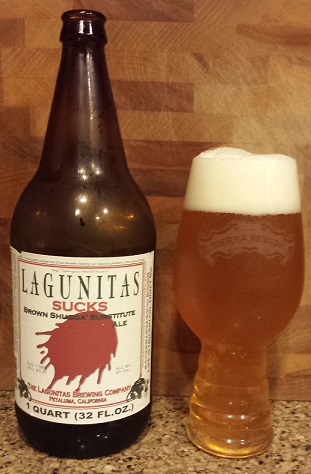 This week, I decided to pick up a bottle of a beer that I’ve wanted to try for a long time and just never quite gotten around to buying. The Schlenkerla Rauchbier. 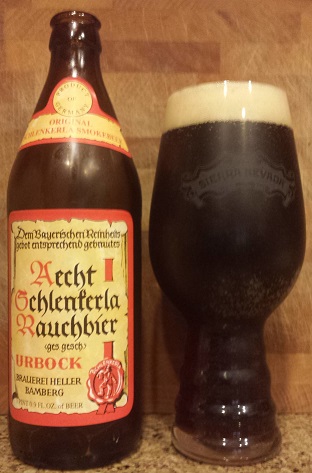 Rauchbier is a somewhat little-known style in the US. Using malts dried over open hardwood flames rather than in a kiln, the malts pick up the smoke just like your favorite ribs. A couple hundred years ago, it’s likely that almost all beer had some level of smoke. Today, it’s the exception, rather than the rule.

It’s not that uncommon for some beers to use a bit of smoke. Alaskan Brewing Company is known primarily for their smoked porter, in fact [which is excellent]… The more traditional German Rauchbier, however, is its own style. In this case, the Rauchbier Urbock will be darker and stronger than the usual Rauchbier, as it’s a smoked bock.

On to the fun stuff!

Aroma: Smoky? Yes, it’s smoky. A typical German lager usually doesn’t have a strong natural aroma, so the smoke dominates this like hop aroma dominates an IPA. If this were a homebrew, I’d wonder what flaws that smoke was hiding, but in a beer of this pedigree, I don’t think I’ll find any. Smoke here is prominant, but not overdone.

Flavor: Clearly, the smoke comes through again here. Smoke is a prominent flavor in this beer. When the beer was first poured (from my admittedly too-cold fridge), the smoke was more dominant, but as the beer warms, a bit of grainy sweetness comes through underneath the smoke. With that warmth, the malt develops into a nice flavor backbone offsetting the smoke.

Mouthfeel: Smoked malt in a beer has a very similar quality to oaking a beer — it has a very distinct mouthfeel. It’s quite difficult to describe. There’s a part of me that wants to call it astringent, and yet another part that wants to call it oily. It’s like it’s puckering and coating the tongue all at once. It’s neither of those, but maybe that gives you an idea of what’s going on. Beyond that, the beer is full-bodied, as a German bock should be.

Overall Impression: This is a very good beer. The smoke melds well with the flavors as a bock, and it comes together in a very well-crafted total package. After I got my “review tastes” out of the way, I paired it with pepperoni pizza and its strong flavors stood up to the pizza without overshadowing the pizza.

Weekends tend to be a slow time for political blogs, so it’s a perfect time to get into another passion. So I’m happy to announce a new weekend off-topic feature here: Brad’s Beer Review.

As many of you already know, I’m a homebrewer and a beer geek. What’s a beer “geek”, you [probably don’t] ask, and how is it different from a beer snob? Well, it’s simple: 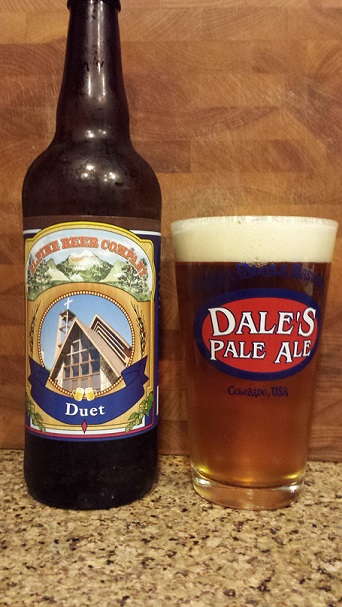 I’m a beer geek. I don’t care what you drink. Unlike the folks from the Washington Post, I’m not going to deride you for what you drink, whether it’s Bud Light or Smirnoff Ice.

That said, if you’re looking for a beer sherpa on the path to enlightenment, I’m happy to show you the way. So to start off this new feature, I decided to reach into the beer fridge for something a little special. In future instances, the feature may not be a beer, rather it may be a beer bar, brew pub, or craft beer centric restaurant. I travel quite a bit for work, so I’ll do my best to keep it varied. And it may not be a commercial beer. As a homebrewer, I might offer my own brews up from time to time (with recipe, of course).

Alpine Brewing Company is located in Alpine, CA, a tiny town well east of San Diego. They’re well known in the craft beer community, but even living in SoCal I didn’t get the chance to taste their wares until a few weeks ago. Mostly because Alpine CA is in the middle of freaking nowhere. They’re well known for their signature Double IPA, Pure Hoppiness. They didn’t have it available in bottles when a friend was in the area, so he brought me a few bottles of Duet, an IPA.

Duet is so named because of the use of Simcoe and Amarillo hops, and the first impression of the beer is the aroma. You can smell the Simcoe. Simcoe is well known as one of the key hops in another highly-touted beer, Pliny the Elder from Russian River. The Simcoe is offset by the Amarillo, which is known for a strong citrus aroma.

Visually, although my picture shows it a bit dark, the beer pours a nice pale gold. Great clarity.

On the tongue, this hits the mark. Any west-coast IPA should be hop-forward, an it is. Poor examples of the style are all hops, without any malt backbone to back it up. Duet has enough malt to give a great foundation for the hops, and let them shine. It’s got malt without being sweet (Dogfish Head, I’m looking at you!), and while it’s not quite as dry and crisp as I like my IPAs, it still makes me want more. You taste this beer and you know why everyone goes nuts over Alpine.

Then you come to the question in the craft beer world of drinkability. Which is really the question “does this taste like this beer will mess me up as much as it will mess me up?” On that metric, this beer is highly drinkable. The Alpine web site says this is a 7% ABV beer. Taste wise, I’d guess much lower. This beer carries zero alcohol warmth, and you’re left feeling like you could pound these away until you’ve forgotten that you’re at a brewery that’s closer (as the crow flies) to Mexico than it is to San Diego and you don’t have a ride home.

In short, I’m impressed by this beer. Alpine has absolutely nailed it. You’ll find as this feature continues that this is not all that common when it comes to me and beer. So if you can find some Alpine (you can’t… sorry.), buy it!