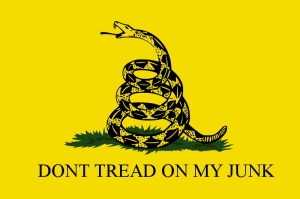 As Stephen Littau noted, November 24th (Wednesday) is the busiest travel date in the country and it’s also National Opt Out Day.  To assist Opt Out Day participants, and all air travelers after Wednesday, the Opt Out Alliance is providing free “Know Your Rights” travelers cards. I spoke with one of the key people at the Opt Out Alliance and he stated that because there isn’t enough time for people to receive a real card via snail mail before Wednesday, people who sign up will get an immediate .pdf copy of the card by e-mail and their wallet card will arrive later in the mail.

[The TSA PR person] said, “Well, the airport is very important to all of our incomes and we don’t want bad press. It’ll hurt everyone, but you have to do what you think is right. But, if you give me your itinerary every time you fly, I’ll be at the airport with you and we can make sure it’s very pleasant for you.”

No law of the United States shall be construed to confer any immunity for a Federal employee or agency or any individual or entity that receives Federal funds, who subjects an individual to any physical contact (including contact with any clothing the individual is wearing), x-rays, or millimeter waves, or aids in the creation of or views a representation of any part of a individual’s body covered by clothing as a condition for such individual to be in an airport or to fly in an aircraft. The preceding sentence shall apply even if the individual or the individual’s parent, guardian, or any other individual gives consent.

Over at Forbes, Art Carden gets pragmatic:

Bipartisan support should be immediate.  For fiscal conservatives, it’s hard to come up with a more wasteful agency than the TSA.  For privacy advocates, eliminating an organization that requires you to choose between a nude body scan or genital groping in order to board a plane should be a no-brainer.

Bob Barr was prophetic, then adds that folks should opt out:

Well, surprise, surprise — the government is not telling us the truth.  In fact, the specifications for the manufacture of the machines mandates that they have the ability to store images on hard disk storage, and that they possess the ability to send the images.   Of course, the transmission of such data creates the obvious possibility that hackers could access the data and print out or view the images.  The images themselves portray people without clothes on, and include relatively clear depiction of genitalia.

I don’t know if you’ve heard the term “security theater,” but that’s what we have in our country. Rather than actually doing their jobs and following up on leads like the one given by this terrorist’s father, security officials are more interested in creating an illusion that we are safe by temporarily curtailing privacy rights or keeping you from bringing a razor in your carry-on.

More importantly, though, Obama’s response strikes me as being politically tone deaf. In the face of outrage over Americans being groped by TSA agents, children being man-handled in a bizarre procedure that makes no logical sense, and people being exposed to the humiliation of having prosthetic breasts removed or being covered in their own urine, Obama’s “Too bad, you’ve gotta do it anyway” response is a sign of how far removed from reality the Presidency makes a person. If the President or members of his family had to subject themselves to TSA screening on a regular basis, one would think his opinion on the matter w0uld be quite different.

Back to the serious side of things, Gary Johnson asks “Why Do We Have a TSA?” His solution:

Instead of trying to fix or adjust or moderate TSA airport screening procedures to make them less abusive or slightly more tolerable, I say it is time to turn airport screening and security over to those who should be doing it in the first place: the airlines.

To be sure, there are plenty of additional TSA links and stories out there. Republicans galore are coming out of the woodwork regarding this issue right now. It’s worth noting that the original TSA authorization passed the Senate by a vote of 100 -0. Only nine House Republicans (and zero Democrats) opposed the final conference report on the bill.

Therefore, I thought I’d limit the links to people within the freedom movement who actually opposed the TSA long before opposing the TSA was cool.

With the Thanksgiving holiday coming up (and busiest travel day of the year), a group of concerned citizens is calling November 24th “National Opt-Out Day.”

It’s the day ordinary citizens stand up for their rights, stand up for liberty, and protest the federal government’s desire to virtually strip us naked or submit to an “enhanced pat down” that touches people’s breasts and genitals in an aggressive manner. You should never have to explain to your children, “Remember that no stranger can touch or see your private area, unless it’s a government employee, then it’s OK.”

The goal of National Opt Out Day is to send a message to our lawmakers that we demand change. We have a right to privacy and buying a plane ticket should not mean that we’re guilty until proven innocent. This day is needed because many people do not understand what they consent to when choosing to fly.

Quote of the Day: 4th Amendment Be Damned Edition

“Nobody likes the 4th amendment being violated when going through the security line, but the truth of the matter is we are going to have to do it.”-Former. Asst. TSA administrator Mo McGowan

So when the friendly TSA agents pull you out of the line for a groping or full body nudie scan as you try to make your way through the airport to fly to grandma’s house this Thanksgiving holiday don’t bother pulling out your pocket Constitution to inform them they are violating your 4th Amendment rights. They know they are and they don’t give a shit.

Hat Tip: Say Anything via Boortz

As cameras have become more available to individuals and government alike, viral videos of cops behaving badly have become quite pervasive on the internet. This short video by The Cato Institute provides a few recent examples of this relatively new phenomenon and explains why recording the actions of police and government officials for all the world to see is good for liberty. Its government that should be watched and its government that should fear the people, not the other way around.

Police Kill Seventeen Year Old: How Much Is Enough?

Last Sunday night, police in Morganton, North Carolina shot and killed 17-year-old Michael Sipes. The officers were responding to a noise complaint called in by a neighbor in the mobile home park where Sipes lived. His mother says there were three children in the home on the night Sipes was killed, and were likely he source of the complaint.

According to those in the trailer at the time, as the knocks continued, Sipes retrieved a rifle, opened the door, and stepped outside. That’s when Morganton Public Safety Officer Johnny David Cooper II shot Sipes in the stomach “four or five times.”

More here and here. Profile of Sipes here. The story is still fresh, but at first blush he certainly doesn’t seem like the kind of kid who would knowingly confront police officers with his rifle.

Of course, beyond this story we saw the Oakland murder of Oscar Grant, the shooting death by police of 92-year-old Kathryn Johnson in Atlanta and the terrorizing of a Missouri family and the killing of their dog during a drug raid (a crime which was replicated several times). This is really unacceptable.

Why is this not becoming an electoral issue? Police have various means at their disposal to nullify suspects and yet story after story of unnecessary lethal force seems to pop up. Republican, Democrat or any party, the candidate who runs on restoring the Fourth Amendment and focussing on law enforcement that prioritizes enforcing laws over terrorizing citizens will get my vote.