The Innocence Project Marks 300th Exoneration; Provides Statistics About the 300

Back in the spring of 2011, some of you may recall our fundraising efforts to raise $500 for The Innocence Project. Our Liberty Papers readers and writers surpassed that donating $570 of the $20,000 The Innocence Project’s overall goal for that period. Though our fundraising effort is over for the time being, you can always donate at their page if you feel compelled to do so (actually, it’s a very good time to donate as right now, the next $19,000 are being matched by other anonymous donors).

This is a great cause that I cannot say enough good things about. While the 300 exonerations is a very impressive achievement, more important is their efforts to reform the system to reduce the number of wrongful convictions in the first place. This infographic from The Innocence Project provides some very eye-opening statistics concerning their first 300 exonerations.

Do We Really Want the President to Enforce ALL Federal Laws?

The Rule of Law, theoretically at least, is superior to the arbitrary Rule of Men. For most of human history, the law has been subject to the whim of a head of state be s/he a monarch, czar, dictator, emperor, etc. James Madison and the framers of the U.S. Constitution wisely determined that the document would be the “supreme law of the land” and everyone from the President to the peasant would be subject to the same law.

But what happens to the Rule of Law when the laws become too vague, too numerous, too unpredictable, and too unjust? According to a 2008 Louisiana State University study (referenced in this article), there were over 4,500 federal crimes on the books. This does not include the thousands more regulations that also carry criminal penalties.

So my question to conservatives and some libertarians who have been critical of President Obama’s executive order to allow individuals who were brought illegally across the border as children under the age of 16 to have temporary work permits is as follows: Do you believe that the president should enforce each and every one of the over 27,000 pages of federal code and prosecute everyone who can be accused of any of the 4,500 + crimes? Should the president send uniformed men with guns to raid the Gibson Guitar Corp, dairy farms who sell raw milk to the public, and medical marijuana dispensaries which operate pursuant to state law? If the argument is that the president is shirking his responsibility by picking and choosing the laws he will “faithfully execute,” the answer necessarily must be “yes.”

When the federal code is so full of laws and regulations, it’s the same as having no Rule of Law at all. The president necessarily must decide which laws to enforce and which to ignore or at the very least prioritize how he will execute the law. As immigration laws go, it seems to me that deporting individuals who were educated here, not criminals, and pay taxes should be a much lower priority to be deported or jailed than someone who as an adult illegally immigrated, stole someone’s identity, and committed a host of other crimes.

Beyond the sheer volume of laws and regulations, I do think there are instances when the president should NOT enforce the law if he, in good faith, believes the law violates the constitution and/or is unjust. Who among us today would argue that when the Fugitive Slave Act of 1850 was in force that a president who refused to enforce such a law was acting like a king because he was usurping the “will of the people”? I would also point out that when the Fugitive Slave Act was the law of the land, it wasn’t at all unconstitutional even though most sane Americans today, regardless of political affiliation and/or philosophy would say the law was immoral. If the constitution itself violates Natural Law (i.e. does not recognize the rights of life, liberty, and property for all human beings), then it too should be nullified in those instances.

Nullification presents problems of its own, however. I recognize that nullification of laws passed by congress presents a possible constitutional crisis. We certainly do not want an all-powerful executive branch that can ignore the congress and the courts, so what is the solution?

The solution, however politically difficult it would be, would be to repeal the vast majority of the federal criminal code and much of the remaining 27,000 pages of statutes. The most sensible place to begin would be with the federal criminal code. Most criminal law should be dealt with at the state level anyway. I haven’t checked recently but I’m pretty sure that rape, murder, burglary, assault/battery, and fraud are crimes in all 50 states and in all U.S. territories.

Additionally, even those who believe the war on (some) drugs is good public policy, most states would most likely (unfortunately) continue locking up non-violent drug offenders without Washington’s help. The country we love would not descend into chaos if criminal law was dealt with almost entirely by the states. If we cannot trust the states to handle protecting individuals inside their borders, what is the point of even having states?

If the federal criminal code only dealt with crimes such as counterfeiting, treason, enacting legitimate interstate commerce regulations (to keep the trade among the several states “regular,” not what the interstate commerce clause has become thanks to SCOTUS), and yes, immigration policy, the president could and should conceivably enforce all the federal laws that are neither unconstitutional nor immoral. The president would no longer have the discretion to enforce the laws he favors and not enforce the ones he does not.

What troubles me about this… I think it’s beyond hypocrisy. I think it’s something to do with class. A lot of people have accused Obama of class warfare, but in the wrong direction. I believe this is Obama chortling with Jimmy Fallon about lower class people. Do we believe, even for a second, that if Obama had been busted for marijuana — under the laws that he condones — would his life have been better? If Obama had been caught with the marijuana that he says he uses, and ‘maybe a little blow’… if he had been busted under his laws, he would have done hard fucking time. And if he had done time in prison, time in federal prison, time for his ‘weed’ and ‘a little blow,’ he would not be President of the United States of America. He would not have gone to his fancy-ass college, he would not have sold books that sold millions and millions of copies and made millions and millions of dollars, he would not have a beautiful, smart wife, he would not have a great job. He would have been in fucking prison, and it’s not a god damn joke. People who smoke marijuana must be set free. It is insane to lock people up. 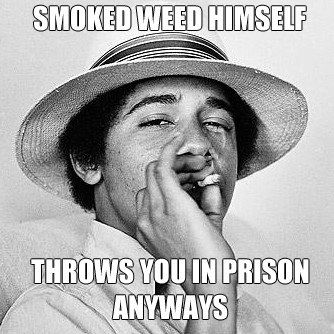 Related Posts:
Song and Open Letter to a President Who is “No Stranger to the Bong”
A Youthful Indiscretion
Reforming America’s Prison System: The Time Has Come

This week, the State of Connecticut made progress in the right direction on the criminal justice front on two issues I care deeply about: the right of individuals to record the police in public and abolishing the death penalty.

Earlier today, the Connecticut Senate passed a bill 42-11 that would hold the police liable for arresting individuals who record their activities in public. Carlos Miller writing for Pixiq writes:

The Connecticut state senate approved a bill Thursday that would allow citizens to sue police officers who arrest them for recording in public, apparently the first of its kind in the nation.

As it is now, cops act with reckless immunity knowing the worst that can happen is their municipalties [sic] (read: taxpayers) would be responsible for shelling out lawsuits.

Senate Bill 245, which was introduced by Democratic Senator Eric Coleman and approved by a co-partisan margin of 42-11, must now go before the House.
The bill, which would go into effect on October 1, 2012, states the following:

This bill makes peace officers potentially liable for damages for interfering with a person taking a photograph, digital still, or video image of either the officer or a colleague performing his or her job duties. Under the bill, officers cannot be found liable if they reasonably believed that the interference was necessary to (1) lawfully enforce a criminal law or municipal ordinance; (2) protect public safety; (3) preserve the integrity of a crime scene or criminal investigation; (4) safeguard the privacy of a crime victim or other person; or (5) enforce Judicial Branch rules and policies that limit taking photographs, videotaping, or otherwise recording images in branch facilities.

Officers found liable of this offense are entitled, under existing law, to indemnification (repayment) from their state or municipal employer if they were acting within their scope of authority and the conduct was not willful, wanton, or reckless.

While I think the fourth and fifth exceptions to the law could be problematic, this should go a long way toward holding the police accountable.

As if this wasn’t enough good news, just yesterday Gov. Dannel Malloy signed a bill to abolish the death penalty in the Nutmeg state. CNN reports:

(CNN) — Connecticut Gov. Dannel Malloy signed a bill into law Wednesday that abolishes the death penalty, making his state the 17th in the nation to abandon capital punishment and the fifth in five years to usher in a repeal.

The law is effective immediately, though prospective in nature, meaning that it would not apply to those already sentenced to death. It replaces the death penalty with life in prison without the possibility of release as the state’s highest form of punishment.

“Although it is an historic moment — Connecticut joins 16 other states and the rest of the industrialized world by taking this action — it is a moment for sober reflection, not celebration,” Malloy said in a statement.

Connecticut isn’t a state that comes to my mind when I think of a death penalty state and for a good reason: only 2 people have been executed in that state in the last 52 years (both of which wanted to be executed), according to the governor. So, if the administration of the death penalty is so infrequent, why does this abolishing of the death penalty even matter? I think Gov. Malloy said it quite well in his signing statement: “Instead, the people of this state pay for appeal after appeal, and then watch time and again as defendants are marched in front of the cameras, giving them a platform of public attention they don’t deserve.”

Keep up the good work Connecticut!

Frontline Investigates the State of Forensic Science in “The Real CSI”

Is the forensic science used in the courtroom reliable? The PBS documentary series Frontline makes an attempt at answering this question in an episode entitled: “The Real CSI.”

I cannot recommend this episode enough.

Watch The Real CSI on PBS. See more from FRONTLINE.

Also, the producers of this episode hosted a live chat for viewers to ask some follow-up questions (I’m sorry I missed it). Here is the archive from the chat.