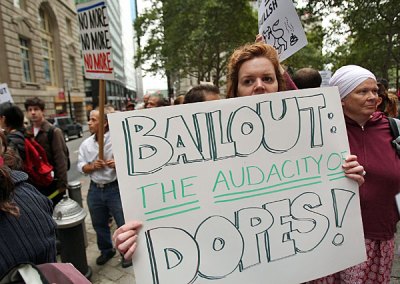 For years, believers in small government have been fuming at egregious Republican spending. All of a sudden, more mainstream Republicans are livid about bailouts. Even elected Republicans who supported bailouts are suddenly jumping on the anti-bailout bandwagon because they’ve been popped upside the head by their own supporters. Even Republican governors accepting bailout money are at increased political risk. If we want legislators and other political leaders to respond to the small-government message we wish to promote, it’s necessary to kick them where it counts. What better way than to hurt them with their own fundraising, activist and voting bases?

Here’s the mission for the small-government crew: Every time a Republican politician promotes or supports a plan which expands government spending, it’s up to us to call them on it with terminology which will hurt their political career.

As an obvious example, if a Republican presidential and vice presidential candidate team up to bail out Fannie Mae and Freddie Mac, we need to call them out on it. It this case, it probably cost McCain and Palin the election.

Again, on the obvious side, Republicans should be aware of whether their congressman voted to bail out auto manufacturers or not.

Regular old pork counts, too. If a Republican wants to spend a couple of million dollars on fish, we need to call him out on it. “Senator Shelby bails out out Catfish Genome Project” would be a good one. Or course, such fishy-smelling pork isn’t limited to Alabama senators. Maine Senators Susan Collins and Olympia Snowe just love bailing out the Lobster Institute.

When a Republican governor wishes to increase taxes, let’s make sure folks know that Governor Riley wanted to bail out the Alabama Education Association or that Governor Huckabee taxes the elderly at the old folks’ home to bail out failed government programs.

Senator Hatch not only supports slavery, but he wants to bail out organizations which can’t obtain enough “volunteers.”

Of course, if it’s an omnibus spending bill, one omnibus target is lobbyists. For example, Congressman Smith and Jones vote “yes” on Obama budget bill to bail out DC lobbyists.

If it’s legislation aimed at lowering the amount of smokers in the country, it’s now a bail out for people too stupid (myself included) to quit.  The same general logic could be applied to about any nanny-state legislation. Even anti-Second Amendment legislation could be considered a bailout to the mortuary industry.

As bailouts are viewed very negatively by most Republicans I know, we need to change the rhetoric in a way that is meaningful to them.  I’ll predict that it will be tough for a Republican constantly tagged with the word “bailout” to win a primary election for the next couple of years, at least.

Pretty much every spending bill coming out of Washington contains the transfer of money from the producer of the money to someone who didn’t earn it.  The formula is simple:

Great Idea from the Left: Have Candidates Sign Pledges to Increase Taxes and Spending

While trashing a positive review of a Republican candidate I just wrote over at The Next Right, the good folks over at The American Prospect inadvertently came up with a good idea.  I was describing a recent conversation with Tim James, who is running for governor in Alabama:

When I had the opportunity, I asked James if I could ask him a quick question.  “Sure,” he replied.  The question I lobbed at him was whether or not he would absolutely commit to not increasing taxes if elected governor.

I pitched the second question a bit harder, but his response came as quickly as the first one.  I asked if he’d commit to not increasing state spending.  “That’s easy,” he said. “You got a tough one for me, now?”

“Okay,” I responded, and threw him a bit of a curveball.  “Would you mind signing a pledge to this effect?”

“I’d love to…,” he stated. Later on, we set up a telephone call to deal with speaking arrangements for an upcoming event and the pledge issue.

It all seems so flippant. Even given the conservative predilection for smaller governments and the ubiquity of Grover Norquist'[s] conservative loyalty oaths, is it wise for any potential chief executive to completely tie their hands, especially in a time of recession? It speaks to a rigid ideological prism rather than the attitude of addressing problems on their own merits.

Now here’s where the awesome idea comes from (emphasis added):

Most of America’s successful conservative executives would have violated both of those pledges; it’s as foolish a set of strictures as if Democrats demanded that their candidates sign pledges to raise taxes and increase spending.

The idea isn’t as foolish as Fernholz suggests.  According to the Americans for Tax Reform website, “The idea of the Pledge is simple enough: Make them put their no-new-taxes rhetoric in writing.”  For the sake of simple honesty, I’d love to see candidates running on tax-and-spending-increase rhetoric.

If today’s Democrats (along with Republicans such as Senators Snowe, Collins and Specter) wish to outspend even the Republicans on corporate bailouts and stimulate the economy with trillions of dollars we don’t have, why not at least be honest about it?  Here’s an applicable rewrite of Grover Norquist’s gubernatorial pledge for candidates running on a big-government platform:

I also like the Republican Liberty Caucus pledge.  Here’s the new Slavery Compact:

Decrease liberty, not promote it; expand government, not shrink it; increase taxes, don’t cut them; create programs, not abolish them; despoil the freedom and independence of citizens, increasing the interference of government in their lives; and absolutely disregard the limited, enumerated powers of our Constitution, not promote them.

If politicians are going to legislate and govern expansive and ever expanding government programs, it sure would be nice to see some honesty in advertising as they run for public office.

There seemed to be some good news out of yesterday’s oral argument at the Supreme Court in an important campaign finance law case:

The Supreme Court yesterday appeared ready once again to trim the reach of the McCain-Feingold campaign finance reform act, this time at the behest of a conservative group that produced a withering 90-minute political film called “Hillary: The Movie.”

After a rollicking one-hour argument, it seemed that the question was whether a majority of the court wanted to use an ax or a scalpel to whittle the law, Congress’s embattled attempt to limit the electoral influence of corporations, unions and special interest groups. It is known formally as the Bipartisan Campaign Reform Act of 2002.

While it’s not always easy to predict where the Court will come out based on oral argument, it seems fairly evidence that a majority was skeptical of the government’s application of the law in this case.

It’s not often that I sing the praises of unsafe-at-any-speed Ralph Nader, but his recent legal victory is worthy of such praises.

“LOS ANGELES, March 9 /PRNewswire/ — In a significant move for open-election laws, the U.S. Supreme Court today rejected an attempt to overturn a federal Ninth Circuit Court of Appeals’ decision that the state of Arizona could not require independent presidential candidates to register earlier than candidates affiliated with major political parties.

Arizona’s petition for certiorari to the Supreme Court had been closely watched after 13 other states supported Arizona’s bid to have the High Court hear the case. The federal civil rights case, originally filed in Arizona federal district court, stems from Nader’s 2004 presidency bid.

Ralph Nader had challenged the deadline, contending it violated his First Amendment rights to free speech and political association. Lead Attorney Robert Barnes of the Bernhoft Law Firm represented Nader before the Ninth Circuit, which overturned the district court and unanimously declared the Arizona law unconstitutional. Nader’s Bernhoft Law legal team successfully argued that requiring independent candidates to register by June was unfair when the two major political parties did not hold their conventions until the fall.

Perhaps as just as important was the other aspect of Nader’s challenge was the lower court striking down the provision in Arizona law which required petition circulators to be registered to vote within the state. Paul Jacob and others can now circulate petitions to any state government without fear of being put in jail. What a concept!