Why The Federal Budget Keeps Rising

Robert Samuelson has an excellent column in today’s Washington Post explaining why the federal budget keeps going up, and why neither political party wants to do anything about it:

The welfare state has made budgeting an exercise in futility. Both liberals and conservatives, in their own ways, peddle phony solutions. Cut waste, say conservatives. Well, network news reports of $20 million federal programs that don’t work may seem — and be — scandalous, but like Amtrak they’re usually mere blips in the total budget. For its 2008 budget, the Bush administration brags it would end or sharply reduce 141 programs. But most are microscopic; total savings would be $12 billion, or 0.4 percent of spending. Worse, Congress has previously rejected some of these cuts.

Annual budget debates are sterile — long on rhetoric, short on action — because each side blames the other for a situation that neither chooses to change. To cut spending significantly, conservatives would have to go after popular welfare programs, including Social Security and Medicare. To raise taxes significantly, liberals would have to go after the upper middle class, a constituency they covet (two-thirds of all federal taxes come from the richest fifth). Deficits persist, because neither side risks its popularity, and, indeed, both sides pursue popularity with new spending programs and tax breaks.

This graphs says it all: 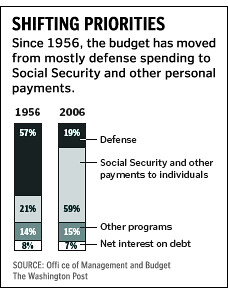 Politically, neither party thinks it can afford to go after the source of the problem. And until that happens, spending will only continue to increase.

Get Your Earmarks Here !

Short on cash or maybe just want a little extra spending money for the weekend ?

Send an email to the Senate Appropriations Committee requesting an earmark. Apparently it’s all the rage on Capitol Hill today.

Personally, I don’t plan on being greedy. Maybe I’ll just ask for a fully stocked bar for the use of The Contributors.

As part of his record-setting budget proposal, President Bush wants to increase funding for anti-drug ads that have been proven to be completely ineffective:

President Bush has proposed a significant jump in funding for an anti-drug advertising campaign that government-funded research shows is at best useless and at worst has increased drug use among some teens.

The administration has asked for a 31 percent increase in funding for the advertising campaign that a nearly five-year study concluded had increased the likelihood that all teens would smoke marijuana. The White House proposal would increase the program’s budget to $130 million over the next year.

What’s even more appalling is that the Bush Administration was aware of the study results last years, and said nothing about it:

The bad study results weren’t news to the White House, which sat on the research for a year and a half while continuing to fund the ad campaign on the basis that the study was still ongoing, Slate magazine reported in September. In October, National Journal reported that John Carnevale, former director of budget and planning for the drug czar’s office, admitted that the office “did not like the report’s conclusions and chose to sit on it.”

It’s bad enough when government spends money on something that is later shown not to work, but it’s even worse when the people who run the program deliberately withhold information showing the program to be ineffective.

An Associated Press story reveals that the government may have given millions, if not billions, of dollars in relief funds related to Hurricanes Katrina and Rita to rebuild homes that never existed:

NEW ORLEANS (AP) — In the neighborhood President Bush visited right after Hurricane Katrina, the U.S. government gave $84.5 million to more than 10,000 households. But Census figures show fewer than 8,000 homes existed there at the time.

Now the government wants back a lot of the money it disbursed across the region.

In the chaotic period after two deadly hurricanes, Katrina and Rita, slammed the Gulf Coast in 2005 – Katrina making landfall in late August, followed by Rita in late September – federal officials scrambled to provide help in hard-hit areas such as submerged neighborhoods near the French Quarter.

But an Associated Press analysis of government data obtained under the federal Freedom of Information Act suggests the government might not have been careful enough with its checkbook as it gave out nearly $5.3 billion in aid to storm victims. The analysis found the government regularly gave money to more homes in some neighborhoods than the number of homes that actually existed.

The pattern was repeated in nearly 100 neighborhoods damaged by the hurricanes. At least 162,750 homes that didn’t exist before the storms may have received a total of more than $1 billion in improper or illegal payments, the AP found.

Given how most government programs work, this isn’t surprising, of course, but it is somewhat distressing to see government ineptitude on such a massive scale.

Stephen Slivinski has taken a look at the FY 2008 budget numbers. He notes a 4.1% increase in spending in non-defense level agencies since 2006 (adjusted for inflation). He notes budget cuts in education, agriculture, HUD, DOJ and the EPA.

However, Slivinski notes, “Yet even by the White Houseâ€™s own numbers, all of these programs combined will still grow beyond the 2006 levels by 4 percentage points above inflation.”

One red flag, pointed out by Slivinski, to the fiscal conservatives among us is the comparison between the 2001 and the new budget. You’ll see that the growth in these same non-defense level cabinet level agencies is 22.4%. Slivinski calls the new budget, “the fiscal equivalent of a recovering alcoholic patting himself on the back for merely drinking six beers a day instead of eight.”

You can view the FY2008 Budget online here.