Children Raised By Lesbians Better Off?

An awesome study turns social conservative thought on families completely on its head:

Contrary to what the religious right might say, children raised by lesbian parents are doing just as well as their peers, according to a new report based on a 20-year study to be published in the journal Pediatrics. In fact, they may be even better off. “When we compared the adolescents in our study to the so-called gold standard,” Dr. Nanette Gartrell, the study’s author, said, “we found the teens with lesbian mothers were actually doing better.” Researchers found that the children showed significantly fewer social problems and rated much higher academically and socially. As for why their children are faring well, Gartrell suggested that lesbian mothers “are very committed, very involved parents,” and may also be better off economically.

Such research proves two things: Gay people are actually an exceptionally well-to-do group, likely based on the fact that they are often couples of working individuals. Also, a free society must not only be politically and economically fluid but also culturally so. Every child is different, and there’s no set standard for how to raise every single one. 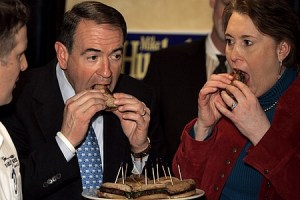 The former governor munching on a Huckaburger that he'd try to prevent you from eating. Credit: Reuters

According to this Twitter account, if former Governor Mike Huckabee’s lips are moving, he’s lying.  Let put that statement to a test.

Here’s an excerpt from a recent interview transcript (emphasis added):

The last time out, my biggest challenge was with the establishment Republicans who just never showed their support. And while I think a person can possibly win without them, the Republican Party needs to unite if it’s going to win in 2012.

Now let’s compare Huckabee’s appeal for unity to other comments he has made.  This is from a year-old Time article:

In a chapter titled “Faux-Cons: Worse than Liberalism,” Huckabee identifies what he calls the “real threat” to the Republican Party: “libertarianism masked as conservatism.” He is not so much concerned with the libertarian candidate Ron Paul’s Republican supporters as he is with a strain of mainstream fiscal-conservative thought that demands ideological purity, seeing any tax increase as apostasy and leaving little room for government-driven solutions to people’s problems. “I don’t take issue with what they believe, but the smugness with which they believe it,” writes Huckabee, who raised some taxes as governor and cut deals with his state’s Democratic legislature. “Faux-Cons aren’t interested in spirited or thoughtful debate, because such an endeavor requires accountability for the logical conclusion of their argument.” Among his targets is the Club for Growth, a group that tarred Huckabee as insufficiently conservative in the primaries and ran television ads with funding from one of Huckabee’s longtime Arkansas political foes, Jackson T. Stephens Jr.

Then there’s this little gem from HuffPo:

Republicans need to be Republicans. The greatest threat to classic Republicanism is not liberalism; it’s this new brand of libertarianism, which is social liberalism and economic conservatism, but it’s a heartless, callous, soulless type of economic conservatism because it says “look, we want to cut taxes and eliminate government. If it means that elderly people don’t get their Medicare drugs, so be it. If it means little kids go without education and healthcare, so be it.” Well, that might be a quote pure economic conservative message, but it’s not an American message. It doesn’t fly. People aren’t going to buy that, because that’s not the way we are as a people. That’s not historic Republicanism. Historic Republicanism does not hate government; it’s just there to be as little of it as there can be. But they also recognize that government has to be paid for.

It seems that Huckabee is all for GOP unity so long as everyone in The Village agrees with his big-government prescriptions.  Not to kick a big-government Republican while he’s down, but it seems he’d be more concerned about dealing with his Willie Horton moment right now.

UPDATE: Here’s why The Humble Libertarian doesn’t heart the Huckster.

Astroturfing Republican of the Day Award

Let’s see if I understand this correctly: Tax Hike Mike wants us to give money to the Huck PAC because of taxes, deficits and expansion of government?

I seem to recall the Club for Growth setting the record straight on just how big Tax Hike Mike would really like the government to be.  Huckabee’s response was to call the organization the Club for Greed.

I also recall Huckabee lambasting libertarians. There’s this sentence from his book.

The real threat to the Republican Party is something we saw a lot of this past election cycle: libertarianism masked as conservatism.

There is also this quote from a HuffPo interview:

The greatest threat to classic Republicanism is not liberalism; it’s this new brand of libertarianism, which is social liberalism and economic conservatism, but it’s a heartless, callous, soulless type of economic conservatism because it says “look, we want to cut taxes and eliminate government. If it means that elderly people don’t get their Medicare drugs, so be it. If it means little kids go without education and healthcare, so be it.”

Huck PAC will be going without my $3, as I certainly don’t want it to be used to expand the size, scope and expense of government.

Is Obama a Socialist? 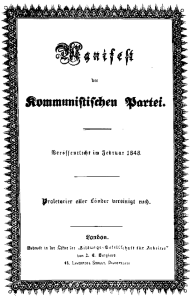 Writing that “Calling Barack Obama’s plan socialistic lacks any class,” Albor Ruiz argues that “fear mongering over a ‘class war’ and an Obama conspiracy to turn the U.S. into a ‘socialist’ country is reaching a fever pitch.”

He then cites “Tax Hike Mike” Huckabee as an example:

First of all, citing Huckabee was a mistake, as he’s part of the problem and clearly not part of the solution.

My favored definition of socialism comes from Merriam-Webster: “ any of various economic and political theories advocating collective or governmental ownership and administration of the means of production and distribution of goods.”

This seems to describe the current administration, but there are other definitions which may or may not apply, as well.

If we are to pick an accurate word to describe Obama’s (to be fair, Bush laid the foundations which hadn’t already been established by previous administrations) designs on our children’s and even their children’s money, what should it be? If we are to better describe Obama’s move towards what Karl Marx called “a heavy progressive or graduated income tax,” how would we do it?

“Abolition of all right of inheritance?”  There is already talk of Obama toying with the Death Tax.

We may have moved from the Agrarian Age to the Information Age, but an “extension of factories and instruments of production owned by the State” seems to apply to AIG fairly well. If seventeen percent of our gross domestic spending is on health care, additional government control of this industry would certainly apply.  Control of the automobile industry clearly involves factories and instruments of production. While Obama has backed off his call for a Car Czar, the fact remains that he certainly made the attempt and likely will again if he gets the opportunity.

While “a national bank with State capital and an exclusive monopoly,” may not precisely describe the Federal Reserve, for many intents and purposes it does.

Fannie Mae and Freddie Mac seem a major starting point for “centralisation of credit in the hands of the State.”  Purchasing shares and attaching federal strings to bank bailouts is certainly a big move in this direction.

Perhaps Mr. Ruiz is correct.  Should we be calling Obama’s attempted takeover of major portions of our economy while further redistributing the wealth socialist or Marxist?  Not that one necessarily excludes the other.

In reality, it all boils down to one simple question: Does it really matter if we call current policy socialism or a crap sandwich? It tastes the same either way.

About the direction the Republican Party should take, Craig Shirley said:

“The 2008 campaign was never an honest choice between conservatism and liberalism. Really, it was just a referendum on George Bush,” said Craig Shirley, a consultant and author of a forthcoming book on the 1980 presidential campaign.

Shirley thinks equating Democratic values with socialism is a formula for victory. “What Republicans want to do and need to do is put socialism on trial,” he said.

“Socialism has been a conservative talking point since the late 1880s,” one House GOP aide added.

Being out of power allows Republicans to explore a populist side they were unable to with the previous administration.

While I certainly don’t agree with many other items on the GOP agenda, I found this advice sage enough to try to convince members of the right to heed Shirley’s words.  However, if socialism is to be placed on trial, we should probably take a quick peek at who some of the indicted co-conspirators will be:

A sizable stack of GOP governors

A probable stack of GOP senators

Mind you, this is just a very short list.  For example, one would need to look carefully at each and every Republican legislator who voted for any of Bush’s bloated spending packages.  When John McCain referred to Barack Obama as a socialist, most libertarians I know just laughed.  As the old saying goes, “It takes one to know one.”

H/T to The Other McCain